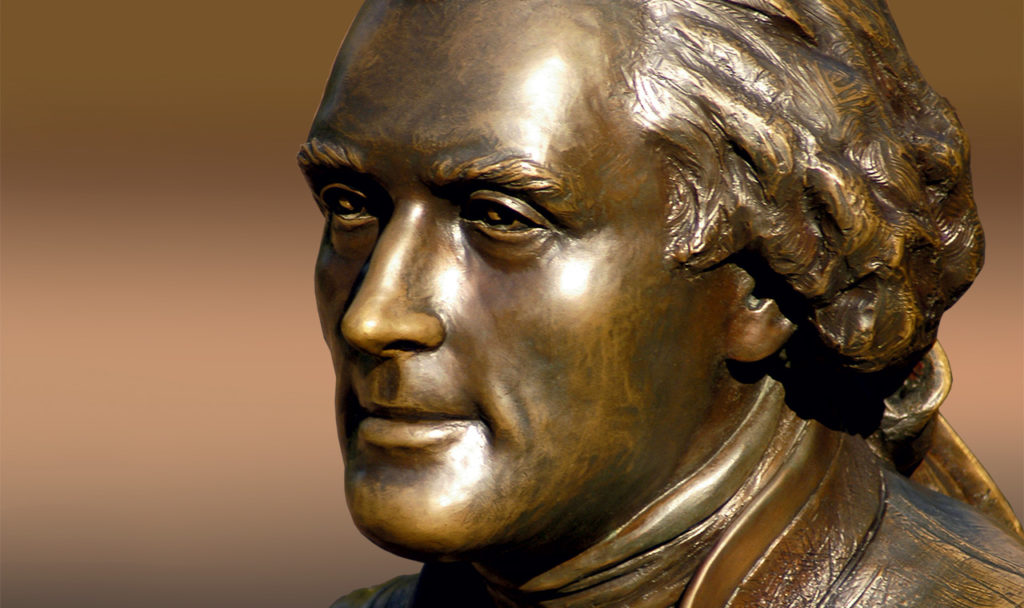 On July 9, 1776, as the “largest, most powerful force ever sent forth from Britain or any nation,” was gathering in New York waters, General George Washington ordered his soldiers to march onto the commons.1 At 6 p.m., a declaration approved by the Continental Congress five days earlier was read aloud. It began:

When in the Course of human events, it becomes necessary for one people to dissolve the political bands which have connected them with another, and to assume among the powers of the earth, the separate and equal station to which the Laws of Nature and of Nature’s God entitle them, a decent respect to the opinions of mankind requires that they should declare the causes which impel them to the separation. We hold these truths to be self-evident, that all men are created equal, that they are endowed by their Creator with certain unalienable Rights, that among these are Life, Liberty and the pursuit of Happiness. That to secure these rights, Governments are instituted among Men, deriving their just powers from the consent of the governed, That whenever any Form of Government becomes destructive of these ends, it is the Right of the People to alter or to abolish it, and to institute new Government, laying its foundation on such principles and organizing its powers in such form, as to them shall seem most likely to effect their Safety and Happiness.2

The troops listened in rapture, giving “their most hearty assent, the expressions and behavior both of officers and men testifying their warmest approbation of it.”3 Washington hoped this Declaration of Independence would “serve as a fresh incentive to every officer, and soldier, to act with Fidelity and Courage, as knowing that now the peace and safety of his Country depends (under God) solely on the success of our arms.”4

These farmers and merchants turned militiamen had banded together for a redress of grievances concerning their rights as British subjects. But they were British subjects no more. Now they would fight, not for proper representation in parliament, but for recognition of their inalienable rights to “Life, Liberty, and the pursuit of Happiness.” The principal author of these words, Thomas Jefferson, said they were “intended to be an expression of the American mind, and to give to that expression the proper tone and spirit called for by the occasion.”5

The formal readings concluded, a great mob of cheering, shouting soldiers and townspeople stormed down Broadway to Bowling Green, where, with ropes and bars, they pulled down the gilded lead statue of George III on his colossal horse. In their fury the crowd hacked off the sovereign’s head, severed the nose, clipped the laurels that wreathed the head, and mounted what remained of the head on a spike outside a tavern. Much of the lead from the rest of the statue would later be, as reported, melted down for bullets “to assimilate with the brains of our infatuated adversaries.”6

Though vastly outnumbered by a better trained and better equipped British military, Washington’s Continental Army now held more firmly than ever a weapon that would win the war: righteous, moral fervor. Such was the power of Thomas Jefferson’s words.

Jefferson is one of America’s most revered and most reviled founders. He is loved for authoring the Declaration of Independence, writing trenchantly against slavery, erecting a wall of separation between church and state, founding the University of Virginia, and more than doubling the size of the United States through the Louisiana Purchase. He is loathed for violating principles he espoused (including some in the Declaration), owning slaves (more than six hundred in his lifetime), supporting the French Revolution, instituting an embargo on foreign trade, and appeasing Barbary pirates.

Whereas some say that Jefferson was a man of reason and “the pen of the revolution,” others say he was a walking contradiction who wrote powerful words but didn’t practice his alleged principles. Should Jefferson be placed on a pedestal? Should statues of the man be torn down, like those of George III? How should this founder be remembered?

‘Fix Reason Firmly in Her Seat’

Whatever his flaws and inconsistencies, Jefferson was a man of deep thought who spoke highly of reason and principle, and sought to anchor his ideas in reality. . . .

Jon Hersey is the associate editor of The Objective Standard. His work focuses on intellectual history, specifically, the ideas on which freedom and flourishing depend. He has published in-depth articles on John Locke, Thomas Jefferson, Benjamin Franklin, John Stark, William Wilberforce, Rosa Parks, and more.
View all posts by Jon Hersey →

Reason in Rhyme: A Philosophic Oratorio
In Defense of Editing