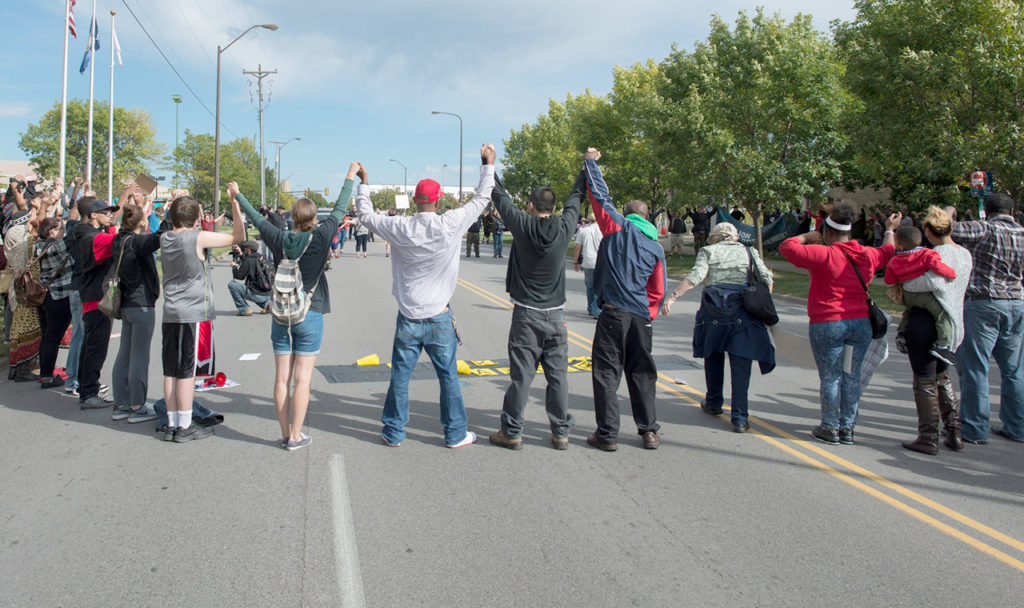 In 2014, students at Rutgers University gathered around the president’s office to protest the university’s invitation to Condoleezza Rice to speak at commencement. Tensions rose between the administration and students, but no violence was reported. One protest organizer, Sherif Ibrahim, told protesters: “Remember that if they drag you out, no violence. But this is your last chance to be in this building doing this, so do it right.”1 The students stayed in the building for several hours. When police informed them that they would be prosecuted for trespassing if they didn’t leave, they left.

Later in 2014, several students from the University of California San Diego blocked morning rush-hour traffic in La Jolla in protest of the Michael Brown shooting in Ferguson, Missouri. Protest leader Marcelis Muriel declared: “We do not engage. We are not violent. We are a peaceful protest.”2 Several angry commuters got out of their cars and yelled at the protesters. News footage shows one such driver, Tyree Landrum, wrestling Muriel’s bullhorn away.3 Still, Muriel and the other protesters did not fight back. When the police arrived and ordered the students to leave, they did.

In these two cases, although the protesters did not engage in overt violence, they did violate rights. A right is a moral principle arising from the fact that in order for people to live as human beings, they must be free to act in accordance with their judgment. To intentionally inhibit someone from acting on his judgment by using physical force or the threat of force is to violate his rights.

Likewise in La Jolla, protesters delayed many people, such as Tyree Landrum, who were trying to get to work. Their coercive actions violated Landrum’s right to act in accordance with his judgment, and, in so doing, could have cost him his job—which would have been devastating for him and his six children. The protesters’ coercive actions also violated the rights of Landrum’s employer, who counts on him to be at work in accordance with their contract and whose business cannot function when “peaceful” thugs block employees from getting to work.

Additionally, the section of interstate that the protesters blocked in La Jolla was near the local hospital and other medical centers. As one commuter, Brad Swisher, noted: “What if someone was dying while trying to get to the hospital? What about the doctors and nurses trying to get to work?”4 By intentionally and forcibly preventing people from using the road, the protesters violated rights in myriad ways and put lives at risk in the process.

The widespread notion that people have a “right to protest” so long as their tactics fall short of overt violence or property damage is false. Rights can be violated in more subtle ways.

Granted, some instances of rights violations are simple and relatively easy to see clearly, whereas others are complex and can require substantial analysis to make clear. But the only way to achieve clarity on any such matter is to ask the right question: “Is someone intentionally and forcibly stopping someone else from acting in accordance with his own judgment?” If so, rights are being violated.

The rights to speak one’s mind and to peacefully assemble do not grant one the right to violate the rights of others. The fact that a protest does not involve overt violence does not mean it doesn’t violate rights. And the kinds of “protests” that do violate rights should be illegal.

Jonathan Townley is an aerospace engineer working in the defense industry.
View all posts by Jonathan Townley →
A Plea for Voluntaryism
The Internet of Money, by Andreas M. Antonopoulos

4. Stickney and Gomez, “Protest Halts Traffic on NB I-5 in La Jolla.”