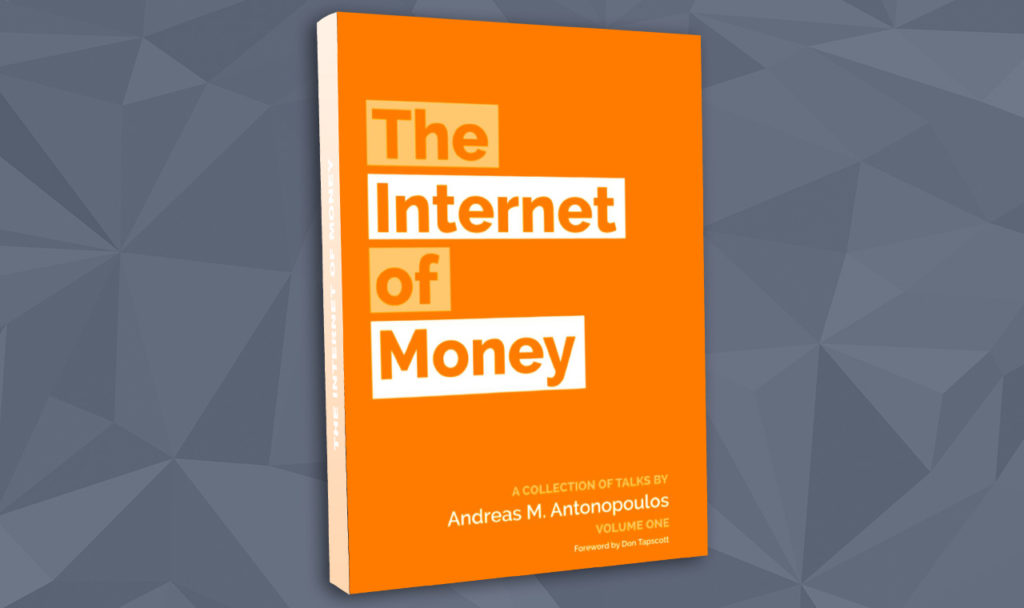 As the price of Bitcoin has reached ever-greater heights (from $960 at the start of the year to more than $7,000 in early November), many prominent individuals have publicly commented on it. According to Bill Gates, “Bitcoin is better than currency.”1 John McAfee, the controversial founder of the security software company named after him, predicts that the price of Bitcoin will be $500,000 in the next three years.2 On the other hand, Nobel Prize-winning economist Robert Schiller says Bitcoin is a “fad,”3 while JPMorgan Chase CEO Jamie Dimon calls it a “fraud.”4

What exactly is Bitcoin? Why does it matter? And what are its future prospects?

Andreas Antonopoulos, a technologist and computer scientist, addresses these questions in his engaging book The Internet of Money, which is a collection of talks that he gave around the world from 2013 to early 2016. Antonopoulos is a leading expert, popularizer, and advocate of Bitcoin. He testified before a Canadian Senate Committee about Bitcoin and persuaded them to take a hands-off, wait-and-see approach rather than rushing in to regulate it.5 Whereas Antonopoulos’s first book, Mastering Bitcoin (2014), is a technical book written for software developers, The Internet of Money is for a general audience.

Antonopoulos takes a big-picture view of Bitcoin and its possibilities. He isn’t shy about making bold statements and predictions. Bitcoin, he argues, is “the most important technological invention in computer science of the last 20 years” (loc. 63).

Antonopoulos points out that although Bitcoin is digital money, that’s not its distinguishing feature. Most national currencies, such as the U.S. dollar, are also digital. “Less than 8 percent of these currencies,” he says, “exist in physical form; the rest is bits on ledgers” (loc. 434). Bitcoin is a cryptocurrency—“a technology, a network, and a currency” (loc. 155). It’s a system of money that is borderless, transnational, open source (the software code is publicly available for anyone to improve upon), and peer to peer (there are no intermediaries such as banks or governments). Antonopoulos continues, “Bitcoin is not a company. It is not an organization. It is a standard or a protocol just like . . . the internet. It’s not owned by anyone” (loc. 81).

Bitcoin is based on a new technology called “blockchain.” This, Antonopoulos explains, is a tamperproof ledger of transactions, distributed across millions of users’ computers. The blockchain “operates by simple mathematical rules that . . . allow a completely decentralized network of computers to agree on what transactions have occurred on a network, essentially agreeing on who currently has the money” (loc. 82). The blockchain solves a problem inherent to digital money: double spending. That is, the blockchain is important because it prohibits a person from spending the same unit of money more than once.

Antonopoulos notes that “Bitcoin is made for the internet age” (loc. 125), and he argues that it transcends many of the limitations of financial services today while opening a whole new world of opportunities. He points out, for example, that credit cards were not designed for use on the Internet. Many companies store their customers’ credit card information for various reasons. This is a deeply flawed practice, Antonopoulos argues, as it creates a centralized, thus vulnerable, stash, allowing hackers to attack large retailers and steal millions of credit cards—recall Target and Home Depot. “There is no information security trick,” he says, “that can protect for all possible types of attacks. Credit cards are broken by design . . . [but] Bitcoin is fundamentally different” (loc. 1655). He explains that because the Bitcoin network is distributed, not centralized (and for other technical reasons), it is immune to mass theft and data breaches.

Billions of people in the developing world are isolated from banks. But Antonopoulos observes that even in the poorest, remotest places on Earth, there is a cell-phone tower and a small solar panel on a hut, which can feed a Nokia 1000 phone—a device that billions of people have. Because Bitcoin enables borderless, peer-to-peer transactions, these phones can be turned into not just a bank account, but a bank. “What happens,” Antonopoulos asks, “when you connect 6 1/2 billion people to a global economy without any barriers to access” (loc. 753)? In short, it “will change the world” (loc. 782).

A person can send Bitcoin “from any point in the world to any other point in the world instantaneously [and] securely” (loc. 72). Consequently, Antonopoulos thinks Bitcoin will capture the international remittance market, which consists mainly of immigrants who send back money to their families in their home countries. Companies such as Western Union charge 9 percent or more for these transactions, but with Bitcoin, it costs “not 10 percent, not 5 percent, but . . . 5 cents” (loc. 769).

The foregoing only scratches the surface of Bitcoin’s possibilities. Bitcoin enables innovation without permission. Because it is an open network (much like Wikipedia), anyone is free to build a new application on the Bitcoin blockchain. As Antonopoulos puts it, “You don’t need to ask anyone to invent a new financial instrument, a new payment system, a new service. You can just do it” (loc. 146).

Because Bitcoin threatens to disrupt the status quo, it has many critics and skeptics, and Antonopoulos addresses many of their concerns and objections. He points out that the media have bashed every new, epochal technology—including cars and electric power generation—when it was first introduced. He also notes that critics highlight that criminals use Bitcoin. So what? According to Antonopoulos, criminals have always used new technologies. He recalls that critics said the same thing “about the internet in the early ’90s. It is a haven for pedophiles, terrorists, [and] drug dealers” (loc. 510).

Other criticisms of Bitcoin include that it is slow, not user-friendly, and can’t scale. Again, Antonopoulos points out, all of this was true about the early Internet. “While we made the internet easier, society caught up and also understood the really inscrutable parts of the internet. The same thing is happening with bitcoin” (loc. 1610).

Regarding scaling, currently Bitcoin can handle only a tiny fraction of the transactions that credit cards can. But Antonopoulos says that scaling is a moving target; scaling capacity will improve over time. The bottom line, he argues, is that it is still early for Bitcoin. Its kinks will be worked out just like they were with the Internet.

The Internet of Money doesn’t address every objection that skeptics might have regarding Bitcoin. For instance, most proponents of a free market favor a monetary gold standard. They argue that gold, unlike Bitcoin, is ideal as money because it’s a physical commodity that’s scarce, divisible, fungible, and durable. I’m speculating here, but Antonopoulos would probably retort that Bitcoin offers advantages that are not possible with current payment systems even if we had a gold standard. For example, by circumventing intermediaries such as banks, Bitcoin transactions are (nearly) anonymous and have very low fees. Such low fees enable micropayments (online transactions for less than a dollar.) Perhaps Bitcoin could somehow be integrated with gold without requiring third parties, but that’s for the market to figure out.

The book does have some flaws. In some places, Antonopoulos says Bitcoin is a currency (and much more), but in other places he says it’s not a currency (locs. 66, 757, 791, 1882). He correctly points out that Bitcoin doesn’t suffer from the “tragedy of the commons” (the principle that an unowned, commonly used resource will be neglected or depleted because there are no incentives to maintain it). He incorrectly says, however, that the tragedy of the commons is a “market failure” (loc. 853). A problem caused by the absence of a market cannot be a failure of the market. The tragedy of the commons is, in fact, a failure of government to define, recognize, and protect private property rights. Then there’s this absurd statement: Because money is an abstraction, he says, it’s “a shared cultural hallucination. It’s a shared delusion” (loc. 1315). I should point out, too, that because the book is a collection of talks, some material is repeated a few times.

Antonopoulos is also unduly harsh on banks. He correctly acknowledges that “banking was once a great liberator” (loc. 372) and that “the combination of state and money produces toxic results” (loc. 396). In some of his remarks, though, it’s unclear whether he’s criticizing state-controlled banking or banking as such. And he ridiculously calls traditional financial institutions “corrupt” for charging higher fees than does Bitcoin (loc. 111).

Despite its flaws, The Internet of Money is worth reading. (I’ve read several other books on Bitcoin/blockchain, and none were nearly as insightful and interesting as this. I’m looking forward to reading volume 2, which will be available December 1, 2017.) Antonopoulos makes a compelling case that Bitcoin is here to stay—that it will revolutionize not only financial services and many other sectors, but quite possibly the entire global monetary system itself.

Michael Dahlen is the author of Ending Big Government: The Essential Case for Capitalism and Freedom. He holds a Master of Science in finance and economics from Walsh College and a Bachelor of Science from Penn State University. His articles have appeared in Skeptic, Liberty, and American Thinker. He is a managed accounts administrator for SEI Investments.
View all posts by Michael Dahlen →
When the ‘Right to Protest’ Is No Such Thing
The Vanishing American Adult, by Ben Sasse