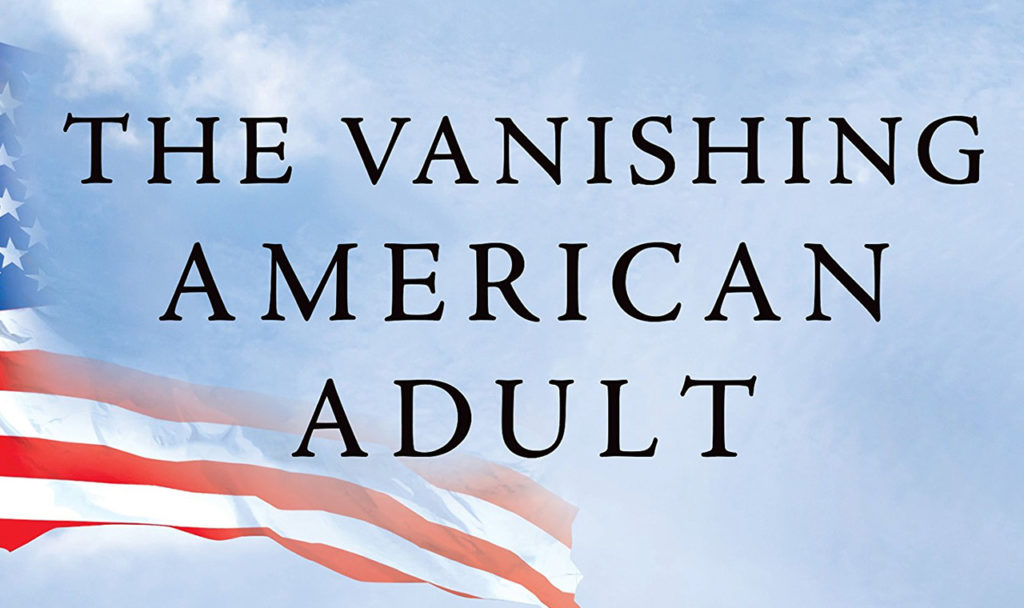 The newspeak of “trigger warnings,” “microaggressions,” and “safe spaces” emanating from America’s college campuses in recent years is alarming. Such terms have become hallmarks of a generation too emotionally and intellectually fragile to entertain challenges to their ideas. And these youths are, inevitably though unbelievably, tomorrow’s leaders. They will inherit a world that is experiencing unprecedented technological change, economic dislocation, and geopolitical tension—and they are not prepared to deal with it. As Ben Sasse writes in his book The Vanishing American Adult: Our Coming-of-Age Crisis—and How to Rebuild a Culture of Self-Reliance, we are raising a nation of youths stuck in adolescence. The implications are dire, not just for the young people who will never grow up, but for the future of the American republic itself.

Sasse (who holds a PhD in American history from Yale) is a former college president, a U.S. senator, and a father of three. His varied roles have enabled him to write an engaging and timely book with a wide range of insights. The Vanishing American Adult is a compelling (albeit occasionally awkward) mixture of intellectual-historical analysis, personal memoir, homespun wisdom, and parenting manual.

The book is divided into two parts. Part 1 describes and diagnoses the problem of America’s vanishing adults. Part 2 offers parents and educators practical suggestions for cultivating independent, productive adults. Sasse also includes an illuminating analysis of the role of literacy in the founding of the United States. He writes that the survival of the idea of America depends on the bequest of a “set of shared ideas about freedom” and “precise beliefs about liberty and adult responsibility” (10). Overall, the book offers valuable information and actionable ideas for anyone concerned about the future of liberty, whether parents or not.

Sasse observes that, historically, adolescence was a transitional, formative, and brief phase between childhood and adulthood. Adults provided teenagers with a “realistic sense of what life will be like” (16) and guided them in cultivating resiliency. The end of adolescence was usually marked by certain meaningful rites of passage, milestones that traditionally included moving out of a parent’s home, getting a full-time job, losing one’s virginity, among others. Today, there is little regard for adolescence as a formative and delimited period. Instead of teaching youths to build foresight and resilience, many parents and educators are defaulting on this responsibility. Consequently, many youths are failing to develop the kind of self-reliance, solid character, and self-esteem they otherwise would, rendering them unprepared for the rigors of adulthood. Sasse relates that today’s young adults typically take more medication, spend more time on screens, watch more porn, are less likely to marry, spend more years living with their parents, participate less frequently in community institutions, and are less knowledgeable of history than generations past. Millennials tend to be intellectually fragile and exhibit a “sense of entitlement in the workplace that seems to reflect a reduced sense of toughness, grit, and resilience compared to that of their ancestors” (46). What is causing this “unraveling of adolescence” (18)?

Sasse traces the roots of the problem back to Progressive philosopher John Dewey. In his pursuit of education reform, Dewey “turned the school into the literal center of the world for children, crowding out roles and responsibilities traditionally carried out in families and communities” (66). As Sasse goes on to show, this was not an accident. Dewey held that schools were instruments of social progress whose purpose was not to transmit the knowledge of civilization but to inculcate the child with “social consciousness” (67). Dewey viewed the acquisition of knowledge as a “selfish act” with “no obvious social motive” (67). Thus, traditional learning was anathema to Dewey’s model of proper education, which allows “no room for fixed and natural law or permanent moral absolutes” (67).

As Sasse notes poignantly, Dewey “makes a total claim of ownership on my kids” in the name of social transformation (27). In Dewey’s philosophy, “Education . . . was not primarily about helping individuals, but rather about molding the collective” (68). According to Sasse, “[too] much formalized schooling inevitably crowds out . . . essentially everything for becoming a fully formed adult [and] an emphatic citizen” (77). Consequently, the outcomes of such an educational system are not knowledge and efficacy but ignorance and incompetence, not resiliency but passivity, not independence but dependence.1

Sasse holds that Dewey’s continued influence is the reason so many children remain in a state of “emerging adulthood” (52) and why we are suffering from a national coming-of-age crisis that could signal the end of the American experiment. Sasse agrees with the 1983 A Nation at Risk report on education, which contended, “If an unfriendly foreign power had attempted to impose on America the mediocre educational performance that exists today, we might well have viewed it as an act of war” (72).

Unfortunately, Sasse fails to follow the evidence he lays bare to the conclusion it warrants: that we should tear up and throw out a system rotten to its roots. Instead, he calls for Americans to resist “a mindless expansion of bureaucratized schooling” (81, emphasis added). He then goes on to discuss the potentially transformative effects on education of the digital revolution, greater school choice, hybridized (supplementary) education, and experiential learning—all worthy ideas, but none more than half steps in the right direction.

As a politician, Sasse is a reformer and not a radical. He states explicitly that his goal is “obviously not to question the necessity of public funding for universal education” (59)—presumably because being against public education is a “third rail” for an elected official. But as a parent, he appears to recognize the disaster that is government-run school, as he and his wife have chosen to homeschool their children. As the book moves from insightful philosophic analysis to a more “pragmatic” set of solutions, it becomes increasingly clear that Sasse’s actions on the personal level speak louder than both his words and his actions at the political level.

On this trajectory, Sasse provides a program intended to help any parent reclaim some control over the education of his or her children and to ensure that they become independent, productive adults. The second half of the book focuses on character-building habits that Sasse regards as essential for turning adolescents into adults. Each chapter concludes with a list of “stepping stones” that provides practical, real-world ideas for developing the character traits discussed. These chapters contain much good advice. For example, Sasse advocates that parents provide opportunities for their kids to develop social skills alongside people of different generations, an appreciation of hard work as well as the virtue of productivity, and the ability to travel with confidence and curiosity. Together, writes Sasse, these traits stand “against dependency and for self-sufficiency” (182).

His final piece of practical advice is to “build a bookshelf,” but the corresponding chapter is mostly an essay on the historical role of literacy in the American Revolution and the particular importance of literacy to republican life. Sasse reflects on Thomas Jefferson’s idea that literacy, based on a classical education, is a precondition of freedom. Accordingly, Sasse advocates “rebuilding a culture comprised of resilient, literate, thoughtful individuals” (223).

He summarizes the factors that contributed to a decline in classical education—“our national abandonment of a shared set of readings” (224)—and highlights the assault on the Western canon by the advocates of multiculturalism. Here the reader expects Sasse to reconnect with the thesis of part 1, in which he identifies the deleterious roles of John Dewey and Progressivism. Unfortunately, they go unmentioned, leaving a void where important integrations could have been. Nevertheless, Sasse does provide information necessary for the reader to make such integrations himself.

As a Christian and a conservative, Sasse sprinkles his writing with some predictable tropes and mistakes. Swipes at secularism and selfishness and paeans to faith and duty litter the book but do not override or substantially detract from its central thesis. More egregious is his omission of Lockean ideas from (and his emphasis on Rousseauian philosophy in) his discussion of the Enlightenment and America’s founding. Readers may also be struck that Sasse, who comes across as exceptionally well read, ignores the pedagogy of Maria Montessori—which is, in many ways, the virtuous antithesis to that of Dewey. Sasse also fails to include Ayn Rand in his draft canon of must-read books (which includes titles by F. A. Hayek, Hannah Arendt, George Orwell, Aldous Huxley—and Karl Marx). Despite these flaws, this is a strong book that proves Sasse is one of the more thoughtful and intellectual elected officials.

Sasse concludes with a valedictory chapter whose title, “Make America an Idea Again,” is a pointed rejoinder to Donald Trump’s presidential campaign slogan and strongman rhetoric. He issues a plea to Americans to rediscover the grown-up virtues of self-discipline and self-control. Observing that people who do not have control over themselves will be controlled by others, Sasse concludes that a “nation of adult-children cannot be a nation of self-governing people” (246). The only way to avoid a future of increasing statism is to recognize that children “have to be taught and they have to learn self-governance” (246). They must come to understand that being an American—in the true, ideological sense of the term—is not a passive birthright but an active choice. It is the choice to embrace the core ideas of self-reliance and individual rights on which America was founded and built.

A generation of Americans is growing up ignorant of those ideas. And, as Americans go, so goes America.

Ryan Puzycki is a former Wall Street analyst and private education executive. He holds an MBA from the Stern School of Business at New York University. He lives and writes in San Francisco.
View all posts by Ryan Puzycki →
The Internet of Money, by Andreas M. Antonopoulos
A Dearth of Eagles, by Andrew Bernstein

1. If this sounds like the makings of a slave state, one shouldn’t be surprised to learn that Dewey was influenced by Hegel, whose path of destruction has been laid out in The Ominous Parallels, Leonard Peikoff’s book about the philosophical origins of Nazi Germany.