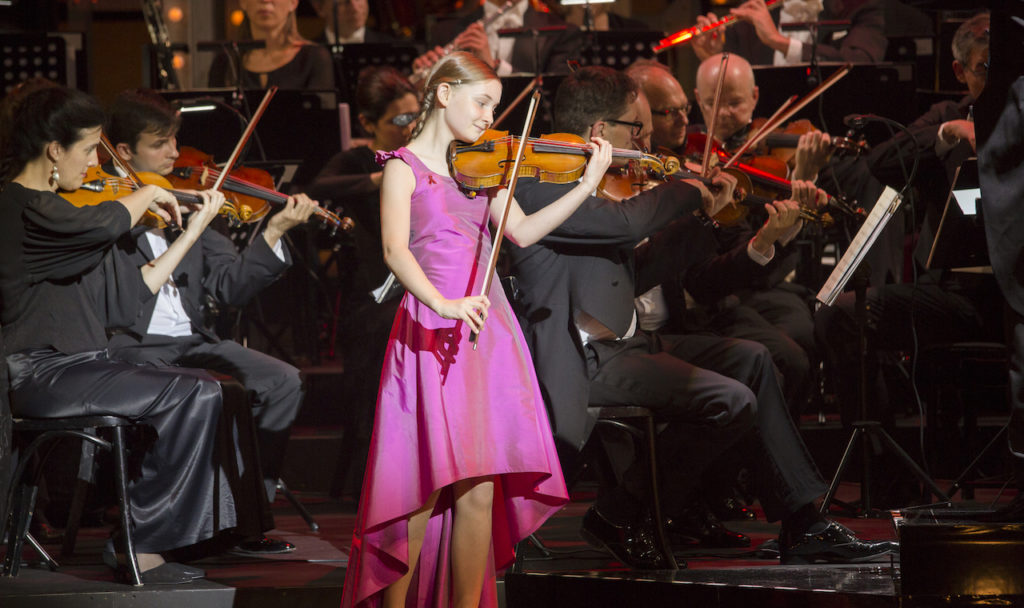 Conductor Zubin Mehta has called Alma Deutscher one of the world’s greatest musical talents.1 In addition to being a virtuoso pianist and violinist who has performed all over Europe, in China and Japan, and in the United States, Deutscher is an accomplished composer of classical sonatas, piano and violin concertos, and operas.

When Mehta brought her opera Cinderella to Vienna, one music critic compared her style to “Viennese Classic and earlier Romantic” and wrote, “she also understands how to build scenes, keep them in tension, and orchestrate dense atmospheres.”2 Another reviewer wrote, “To be sure, the opera does not engage with the music of our time,” saying it sounds very much like Mozart, or Schubert, or Tchaikovsky. Nonetheless, he praised the opera’s originality and wrote that “Alma Deutscher has processed her ideas in a highly professional manner; the instrumentation is stupendous, the dramaturgy is right.”3

Although Deutscher is an exceptional composer and performer, her talents and achievements are all the more remarkable in light of the fact that, in 2017, she celebrated her twelfth birthday. She composed Cinderella when she was ten.

Because Deutscher “does not engage with the music of our time,” her musical compositions have been criticized as “unmodern.” Deutscher doesn’t care. In a delightful video, she enthusiastically and animatedly explains why.

Some people have told me that I compose in the musical language of the past, and [pretending to frown and wagging her finger like an adult scolding a child] this is not allowed in the 21st century. In the past, it was possible to compose beautiful melodies and beautiful music, but today, they say, I’m not allowed to compose like this anymore because I need to discover the [spreading her arms] “complexity” of the modern world, and the point of music is to show the “complexity” of the world.

Well, [leaning merrily in toward the camera] let me tell you a huge secret. I already know that the world is complex and can be very ugly, but I think these people have gotten a little bit confused. If the world is so ugly, what’s the point in making it even uglier with ugly music? . . . So, if you want to hear how ugly the modern world is, you don’t have to come to my concert in July. You can just switch on the television and listen to the news.

Melodies come effortlessly to Deutscher while she’s resting or sitting at the piano improvising or playing with her skipping rope. “I just hear this melody. . . . It plays inside my mind.”5 But then she gets down to the serious hard work of turning her melody into a musical composition.

Lots of people think the difficult part of composing is actually to get the idea, but actually, that just comes to me. The difficult bit is then to sit down with that idea and to develop it, to combine it with other ideas in a coherent way, because it’s very easy just to throw a soup of lots of ideas that don’t make any sense together. But to sit down and develop it and combine it, and afterward to tweak it and polish it, that takes ages, sometimes even years.6

An individual’s most basic view of the world and of his or her place in it is what Ayn Rand called one’s “sense of life.” “There are two aspects of man’s existence which are the special province and expression of his sense of life: love and art,” wrote Rand. In art, “The choice of subject declares what aspects of existence the artist regards as important—as worthy of being re-created and contemplated.” In romantic love, “It is with a person’s sense of life that one falls in love—with that essential sum, that fundamental stand or way of facing existence, which is the essence of a personality.”7

Deutscher’s implicit understanding of sense of life—and her own benevolent sense of life—are on display in the changes she made to the story of Cinderella.

I didn’t want Cinderella just to be pretty. I wanted her to have her own mind and her own spirit and to be a little bit like me. So I decided she would be a composer.

So the whole story is based in an opera company which is run by the evil stepmother, and the two step-sisters are prima donnas who think themselves great singers, when actually they’re completely talentless and pointless. And the prince is a poet. Part of the drama in the story is that Cinderella finds a poem which is written by the prince, but without knowing that the prince wrote it. And she loved the lyrics and is inspired to put it to music. And in the ball, she sings the music to the prince, with the prince’s words, without knowing that he wrote the words and without him knowing that she composed the music. So it’s all in suspense, but, in the end, they find each other like lyrics find melody.8

Thus, in Deutscher’s version, both Cinderella and the prince are artists who fall in love with each other’s sense of life.

Deutscher’s musical accomplishments and psychological wisdom would be extraordinary for a person of any age. For a young lady just entering her teens, they are astonishing. So too is her utter independence of mind. We can see this in her dismissal of those who criticize her music for being beautiful, in her original adaptation of a traditional fairy tale into an opera that re-creates the world as she thinks it ought to be, and in her response to 60 Minutes’s Scott Pelley, who noted that many are comparing her to Mozart. Deutscher replied, “Of course, I love Mozart, and I would love him to be my teacher, but I think I would prefer to be the first Alma than to be the second Mozart.”9

Betsy Speicher is the author of The WHYS Way to Success and Happiness, which presents philosophy in the form of a practical how-to book. Her articles on philosophy, psychology, and education have appeared in popular magazines and professional journals. After graduating from the University of Pennsylvania with a degree in philosophy and a Wharton School minor in finance, she became a software designer and project manager building custom computer systems for dozens of large corporations.
View all posts by Betsy Speicher →
The Boston Tea Party’s Principles and Heroes
Jon Wos: Lighting the Darkness