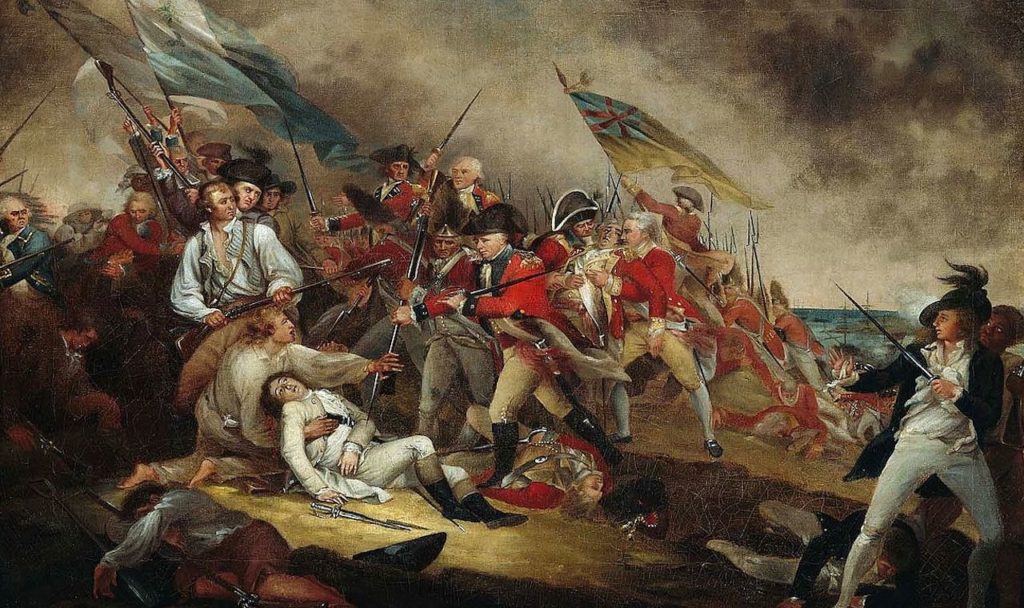 On March 6, 1775, an immense crowd gathered at the Old South Meeting House in Boston to commemorate the anniversary of the Boston Massacre of 1770. Thousands of people attended; inside was standing room only. More than forty British troops showed up, and rumor had it that they would arrest or assassinate the orator. Town representatives had selected Dr. Joseph Warren to give the keynote address. Warren, who had performed Cato in his Harvard days, showed his theatrical flair by arriving dressed in a flowing white Roman toga, a symbol of liberty and defiance to tyranny that would resonate with his audience.1

Because of the immense crowds and the British troops outside the building, Warren entered the pulpit by climbing up a ladder and through a window. Dozens of British soldiers watched the scene menacingly—one even displayed bullets in his palm as a warning to Warren. The doctor was not intimidated. He delivered a passionate address that provided conceptual fuel for the impending revolution. Warren’s speech was delivered two weeks before Patrick Henry’s more famous “Liberty or Death” speech in Virginia.

At the time, Boston was the flashpoint of rebellion, and Warren was at the center of it. His thirty-five-minute speech was a tour de force, encapsulating all of the arguments for American independence. He delivered it with bold defiance—directly in front of heavily armed oppressors.

Warren opened with a statement of natural rights and voluntary association, which began:

That personal freedom is the natural right of every man; and that property, or an exclusive right to dispose of what he has honestly acquired by his own labour, necessarily arises therefrom, are truths which common sense has placed beyond the reach of contradiction. And no man, or body of men, can without being guilty of flagrant injustice, claim a right to dispose of the persons or acquisitions of any other man, or body of men, unless it can be proved that such a right has arisen from some compact between the parties in which it has been explicitly and freely granted.2

He reminded his fellow citizens that their forefathers had come to America to escape European oppression:

Our fathers having nobly resolved never to wear the yoke of despotism, and seeing the European world, at the time, through indolence and cowardice, falling a prey to tyranny, bravely threw themselves upon the bosom of the ocean, determined to find a place in which they might enjoy their freedom, or perish in the glorious attempt.3

He noted that the settlers had gained possession of their land through negotiating with the natives as well as through their sweat equity in turning a wilderness into a habitable civilization—not from a grant by the king. And he pointed out that Britain became interested in the colony only after settlers had done all of the hard work of establishing it:

But when, at an infinite expense of toil and blood, this widely extended continent had been cultivated and defended: when the hardy adventurers justly expected that they and their descendants should peaceably have enjoyed the harvest of those fields which they had sown, and the fruit of those vineyards which they had planted; this country was then thought worthy the attention of the British ministry.4

Warren then went on to show that the conflict was caused by Britain’s change of policy from one of benign neglect to one of taxation without representation—a policy that changed the British-American relationship from one of equal and independent citizens to that of master and slave: “Some demon, in an evil hour, suggested to a short sighted financier, the hateful project of transferring the whole property of the king’s subjects in America, to his subjects in Britain.”

Warren described the results of unleashing British forces on local citizens in gory detail, including a heartrending recount of the Boston Massacre:

Here let him drop a farewell tear upon that body which so late he saw vigorous and warm with social mirth; hither let me lead the tender mother to weep over her beloved son; come widowed mourner. . . . behold thy murdered husband gasping on the ground; bring in each hand thy infant children to bewail their father’s fate.5

He told the audience that although they had done their best to remain loyal to the king, liberty must be defended at all costs: “Our streets are again filled with armed men; our harbor is crowded with ships of war; but these cannot intimidate us; our liberty must be preserved; it is far dearer than life.”

He then zeroed in on the role of individual responsibility in defending liberty—not as an act of sacrifice, but out of a sense of self-worth:

Our country is in danger, but not to be despaired of. Our enemies are numerous and powerful; but we have many friends, determining to be free, and heaven and earth will aid the resolution. On you depend the fortunes of America. You are to decide the important question, on which rest the happiness and liberty of millions yet unborn. Act worthy of yourselves.6

In a line that he inserted at the last minute, and that was tragically prescient, Warren told the audience that their present troubles could soon turn into armed conflict:

But if these pacific measures are ineffectual, and it appears that the only way to safety is through fields of blood, I know you would not turn your faces from your foes, but will, undauntedly, press forward, until tyranny is trodden under foot, and you have fixed your adored goddess Liberty, on the American throne.7

Tragically, Joseph Warren himself would die in a field of blood just three months later.

While other Sons of Liberty such as John Hancock, Samuel Adams, and John Adams convened in Philadelphia as delegates to the Continental Congress, Warren borrowed a musket and headed to Bunker Hill—and to what would be the Battle of Bunker Hill. Although he had been appointed a major general by the Massachusetts Provincial Congress just three days earlier, Warren left the command to General Israel Putnam and Colonel William Prescott and insisted on fighting with the volunteers in the fiercest part of the battle. He knew his fellow patriots were vastly outnumbered and wanted to encourage them with his example. He fought alongside them until he was out of ammunition. Although the patriots inflicted heavy casualties on the British, they were outnumbered two to one and ultimately had to retreat. During the retreat, after Warren was recognized by a British officer, he was struck and killed by a musket ball to the head. The scene was depicted in John Trumbull’s iconic painting, The Death of General Warren at the Battle of Bunker’s Hill, 17 June, 1775.8

Joseph Warren helped ignite the revolution with his oration on March 6, 1775. Had he not died so soon in defense of liberty, he likely would have been among the most important leaders of the American Revolution and subsequent founding.

A few years after the revolution, former Massachusetts governor Thomas Hutchinson speculated, “If [Warren] had lived, he bid as fair as any man to advance himself to the summit of political as well as military affairs.” In 1782, Loyalist Peter Oliver surmised (perhaps hyperbolically) that if Warren had lived, George Washington would have been “an obscurity.”

Although he is all but forgotten today, Joseph Warren should be remembered as a heroic figure who embodied the spirit of liberty that was essential to both the Revolution and the founding. Warren’s injunction to his audience on March 6, 1775—“act worthy of yourselves”—was a clarion call to enact the virtue essential to liberty.

It also raises a question for Americans today: Are we acting worthy of ourselves?

Tom Malone is an entrepreneur and technology consultant in the greater Boston area, and the author of A Defense of American Ideals.
View all posts by Tom Malone →
Live Interview with Carrie-Ann Biondi about Aristotle and Ayn Rand on Flourishing
Henry Ford on the Justice of Income Inequality

1. Cato, a Tragedy, written by Joseph Addison in 1712, tells the story of Cato the younger, who resisted the tyranny of Julius Caesar and thus became a symbol of republicanism and liberty.

8. John Trumbull, The Death of General Warren at the Battle of Bunker’s Hill, 17 June, 1775, Museum of Fine Arts, Boston, http://www.mfa.org/collections/object/the-death-of-general-warren-at-the-battle-of-bunkers-hill-17-june-1775-34260.