View cart “Jackie Robinson: ‘The Best Kind of American Hero’ (PDF)” has been added to your cart. 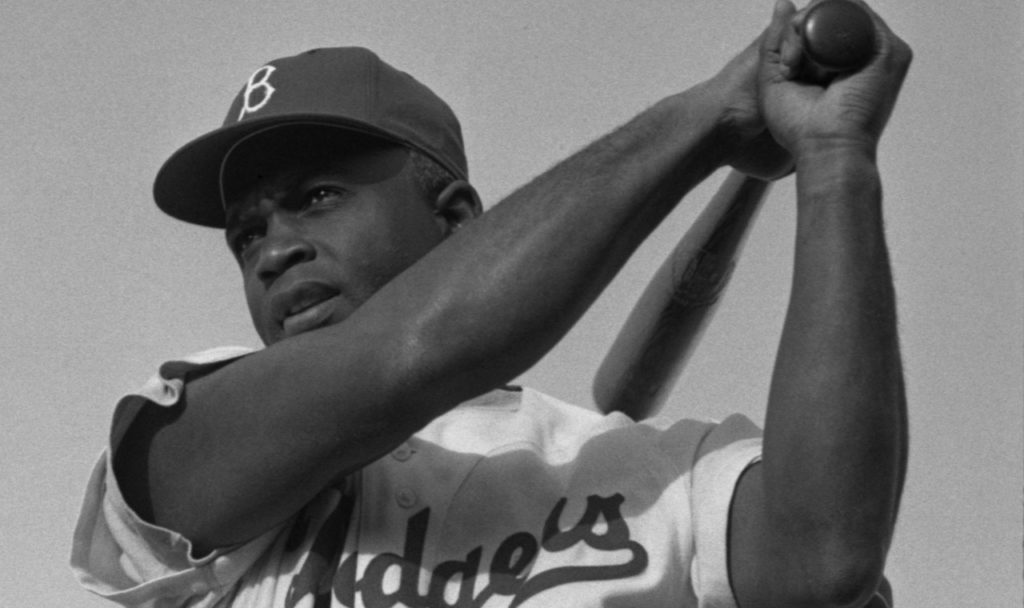 On April 15, 1947, Jack Roosevelt “Jackie” Robinson not only changed the complexion of baseball, he changed America. By crossing the white line at Brooklyn’s Ebbets Field, Robinson became the first black major league baseball player in the 20th century and the catalyst for the full and permanent racial integration of the sport.

Several years earlier, the Brooklyn Dodgers’ general manager, Branch Rickey, set out to challenge the unwritten, racist code that prohibited blacks from playing in the majors. But he needed the right man for the task. It had to be someone with both exceptional athletic talent and moral character. Robinson had excelled in baseball, football, basketball, and track while at UCLA, from 1939 to 1940. He then served in the U.S. Army during World War II. He was articulate, engaging, and enjoyed the spotlight.

Robinson also spoke out against racist customs and laws that violated the rights of blacks. A decade before Rosa Parks heroically refused to sit in the back of the bus because of her color, Robinson had engaged in the same principled refusal. Robinson held that one’s actions should follow one’s convictions. And one of his convictions was that no one should be treated differently because of the color of his skin.

In How to Be Like Jackie Robinson, Pat Williams describes integrity as “the essence of character, a combination of intellectual honesty, emotional empathy and decisive action. People of integrity are consistent in their thoughts and beliefs, applying their core principles in the same way in every situation.”1 Robinson’s integrity would become a key ingredient in the integration of baseball.

Opposition to Rickey and Robinson’s plans was fierce. All of the ball club owners, 90 percent of the players, and most fans wanted segregation, not integration. If any Americans were unaware of what racism looks like when applied to an individual, they found out by observing what happened when Robinson stepped onto the baseball field. His teammates harassed him, opponents shouted racial slurs at him, pitchers threw at his head, and runners tried to maim him. He also received death threats.2

In the past, Robinson would have fought back on the field. However, Rickey convinced him to hold his tongue and his fists. Why? Because retaliation on the field would have been misinterpreted or misrepresented by some as aggression. People who witnessed the abuse that Robinson withstood knew that they would not want to be in his shoes in that situation. And many knew that his restraint was heroic. Robinson’s strategy of refraining from retaliation won over teammates, opposing players, and fans. It even won over team owners when they saw their fan base swell and profits soar as more and more Americans—including many more blacks—began following baseball. In 1947, nearly two million fans watched Robinson play at Ebbets Field, and even more saw him play on fields outside of Brooklyn. Those numbers broke all prior attendance records.

Robinson’s wife, Rachel, deserves tremendous credit for the success of this heroic effort. Her firm character and loving demeanor provided Jackie with much-needed moral support during these turbulent times. Rachel sat in the stands and watched the abuse, at once enraged by the injustice and confident that she and Jackie would endure it and soon be back in the civility of their benevolent home, sharing positive values.

In his first year in the major league, Robinson won the first-ever Rookie-of-the-Year award and led his team to its first National League title in six years.

Whereas Robinson’s remarkable ability and mental strength delighted his teammates and fans, these qualities terrified opposing players, whose nervousness in his presence often caused them to miss routine plays. Pitchers were hypercautious while he was on the base paths, and they would frequently lose concentration on the batter. For an indication as to why, note that the boldest and rarest move in baseball is stealing home plate. It combines speed, skill, and courage. Robinson did it nineteen times in his career, more than any player since.

By the time his decade-long career ended, he had a batting title, six All-Star game appearances, a Most Valuable Player award, six World Series appearances, and one World Series championship. Then he was inducted into the Baseball Hall of Fame.

Robinson’s and Rickey’s success enabled other team owners to see the harm their racism was causing them and their teams. They, too, began signing talented black players, who, in turn, helped their teams win games and earn profits. This race revolution in baseball was helping many people to see the self-destructive nature of racism and the self-serving value of treating human beings as individuals. It was also inspiring millions of kids of all races to pursue their diamond dreams. Some of those kids would go on to play in the major leagues.

And Robinson affected much more than baseball. He affected American businesses and culture as such. After retiring from baseball, he served as vice president of Chock Full o’ Nuts, which, by then, had an 80-percent black workforce. He later became chairman of Freedom Bank in Harlem, where he advocated personal responsibility and urged blacks to become producers, manufacturers, financiers, and business owners. Robinson’s commitment to rights, justice, and a nonviolent approach to racial integration inspired Martin Luther King Jr., who said, “Jackie Robinson made my success possible. Without him, I would not have been able to do what I did.”3 In 1982, Robinson became the first baseball player to be featured on a U.S. postage stamp. In 1984, President Ronald Reagan praised Robinson’s positive impact on American culture and posthumously awarded him the Presidential Medal of Freedom.

On the fiftieth anniversary of Robinson’s Brooklyn debut, his jersey number, 42, was permanently retired by all major league teams. However, it has become a tradition that every year, on April 15, all baseball players have the option to break this rule and wear number 42 in celebration of Robinson. Many do.

Much more could be said about this great, courageous, accomplished man. The foregoing is just a brief indication of his remarkable character and life. As Pat Williams sums it up, “Jackie Robinson is the best kind of American hero—a man to be emulated, a life to be studied, a legacy to be treasured.”4

His own writings and speeches can be found on his website, Robert.Begley.com.
View all posts by Robert Begley →
Henry Hazlitt in One Lesson
The Genius of James Madison

1. Pat Williams with Mike Sielski, How to Be Like Jackie Robinson (Deerfield Beach, FL: Health Communications, 2005), 150.

2. Before the 1947 season started, several teammates signed a petition to keep Robinson off the Dodgers. Philadelphia Phillies manager Ben Chapman’s in-game verbal abuse was so blatant that it made headlines in the national press. He instructed his pitchers, whenever they reached a 3-0 count, to bean Robinson instead of walking him. Star ballplayer Enos Slaughter intentionally spiked Robinson’s leg at first base, cutting a seven-inch gash in his flesh. The most famous death threat came before Robinson’s first game in Cincinnati. Police took the threat very seriously, but Robinson insisted on playing anyway. These events are covered in the Ken Burns PBS documentary on Jackie Robinson, available at http://www.pbs.org/kenburns/jackie-robinson/videos/.