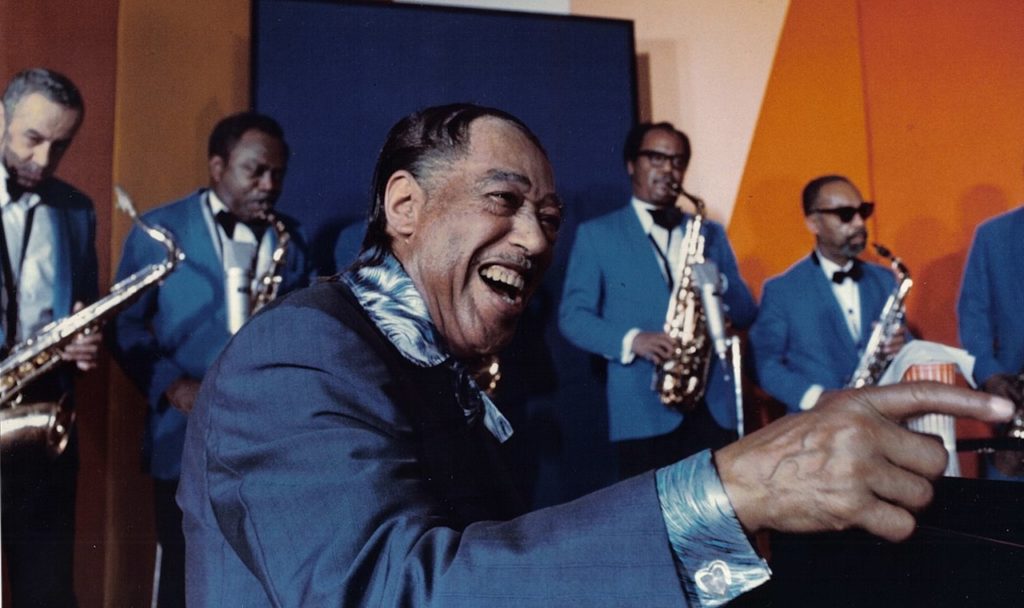 “There’s only two kinds of music. . . . Good music and the other kind.”1 So said one of America’s most prolific composers, Edward Kennedy “Duke” Ellington.

Although famous for his jazz compositions, Ellington wrote in many musical genres. He composed seventeen hundred pieces, ranging from romantic ballads and pop tunes to ballets, operas, Broadway shows, television and film scores. The collection of Ellington’s work, Beyond Category, emphasizes his expansive variety. Some of Ellington’s song titles evoke colorful emotions: “Mood Indigo,” “Black and Tan Fantasy,” “Prelude to a Kiss,” “Solitude,” “Diminuendo and Crescendo in Blue,” “Lush Life,” and “Jump for Joy.”

Edward Kennedy Ellington was born in Washington, D.C., on April 29, 1899. As the son of a butler and grandson of a slave, he was no stranger to the cruelties of racism. Nevertheless, Ellington rose above it, bringing style and elegance to everything he did. His dapper appearance and regal manner led some to nickname him “Duke,” perhaps echoing the “Duke of Wellington.”

Ellington’s artistic talent—expressed in his piano playing and even in his painting—distinguished him at an early age. During his teens, he developed an entrepreneurial streak and began cashing in on his artistic talents. He’d ask those who paid him to paint signs if they also needed a band to perform. And when his band got gigs, Duke solicited patrons to buy signs from him to promote the show.

His early successes, though modest, taught him that he could control the course of his life, which dramatically boosted his confidence. One day he came home and announced, “Mother, your son is going to be one of the great musicians in the world. Someday . . . I’m gonna be bowin’ before the kings and queens.”2

In 1923, Duke left D.C. for New York. The following year he became a band leader, a role he would grow to perfect over the next fifty years. In 1927, Ellington’s band was hired to play regularly at the Cotton Club. Starting with a six-piece group, he continued to add prodigious players until he had an eleven-piece orchestra with brass, reeds, and a rhythm section. Like Mozart, he conducted the group from his keyboard, using piano cues and visual gestures. Steady radio broadcasts of the performances made Ellington famous as the roaring decade ended.

Although the Great Depression of the 1930s was soon taking its toll on the country, Ellington continued to reach new heights of creativity and success. He churned out foot-stomping hits such as “It Don’t Mean a Thing (If It Ain’t Got That Swing),” “Caravan,” and “Take the ‘A’ Train” (see the video of this last below). He also caressed ears with softer, more melodic numbers such as “In a Sentimental Mood” and “Sophisticated Lady.”

People all over the country wanted to hear the Duke’s music—including many in the segregated South. So Duke and his band traveled there via private rail cars, which provided posh accommodations and decent dining. When locals—especially southerners—saw the well-dressed group of black men exit the train on their way to a gig, their jaws dropped.

Ellington’s popularity even crossed the Atlantic. In June 1933, he and his band embarked on a fifty-five-day European tour. The British were especially moved by the sight of tuxedoed musicians—and by their stunning live sound. One reviewer captured the general reaction when he wrote that the band “literally lifts one out of one’s seat.”3

The success of the European tour opened the doors of many world-renowned concert halls to Ellington and his band. In 1943, the “Aristocrat of Jazz” was invited to perform at Carnegie Hall. Ellington composed a special piece for the event: “Black, Brown, and Beige.” It was his most ambitious project to date. It consisted of three movements and lasted a total of forty minutes. Ellington described the piece as a “tone parallel” to the history of the Negro in America. Reviews of the performance were mixed as many in the audience wanted to hear his shorter commercial hits. Nevertheless, Ellington would return to Carnegie Hall many times.

During World War II, tastes shifted away from the big band sound. Many musicians were drafted, and bands across the country shrank as a result. Solo crooners such as Frank Sinatra (an admirer of Duke, who would work with him decades later) were reaching the hearts of lonely women. Still, Ellington kept his band together, financing it with his royalties.

Duke held that music such as his offered much needed spiritual fuel and that it had a vital role to play during the Cold War era of the 1950s. He said, “When people behind the Iron Curtain tune to Radio Free Europe for a jazz program, they are getting two things at once: the music they want to hear and a little exercise in individual freedom.”4 He was proud of his own ambition and resultant fame and fortune, and he supported free enterprise, grasping the importance of a system that rewards effort and success: “[I]f my drive and so forth is greater than another guy’s, then I’m entitled to earn more and spend more.”5

Duke fulfilled the promise that he made to his mother decades earlier when, in 1958, he met Queen Elizabeth II. The King of Swing promised the queen a composition. With his inventive writing partner, Billy Strayhorn, he wrote “The Queen’s Suite.” Duke requested that only one copy be pressed, and he sent it to Buckingham Palace for Her Majesty’s ears only.

During the 1960s, the civil rights movement heated up, and the music of the times reflected the tumult. Ellington composed a new collection of short songs about black history, this time focusing more specifically on the aspirations of blacks. This collection was titled My People. Ellington biographer, Terry Teachout, describes Duke’s views on race relations: “Like Booker T. Washington before him, Ellington had always believed . . . that the way for blacks to overcome the crippling burden of racism was for them to assume individual responsibility for their collective plight and forge a well-heeled, well-educated middle class of their own.”6

On his seventieth birthday, Duke was welcomed home to Washington, D.C., as the special guest of the newly elected president, Richard Nixon. There, at the White House, an all-star band celebrated Duke’s music. The Duke joined in what was perhaps one of his most memorable concerts. Afterward, Nixon honored Duke with the Presidential Medal of Freedom—the highest award that a president can bestow on an American civilian. Nixon said:

Edward Kennedy Ellington, pianist, composer, and orchestra leader, has long enhanced American music with his unique style, his intelligence, his impeccable taste. For more than forty years he has helped to expand the frontiers of jazz, while at the same time retaining in his music the individuality and freedom of expression that are the soul of jazz. In the royalty of American music, no man swings more or stands higher than the Duke.7

Then, Nixon mentioned that although the band’s program was great, it was missing one number. He asked all in attendance to help him rectify the situation. Nixon sat down at the piano, and the whole house sang “Happy Birthday” to the Duke—a fantastic spectacle. And it’s one that we are fortunate enough to be able to relive. Happy Birthday, Duke Ellington!

Check out this video of Duke’s “Take the ‘A’ Train,” for a taste of the unrestrained joy he brought to music. Enjoy!

His own writings and speeches can be found on his website, Robert.Begley.com.
View all posts by Robert Begley →
Benjamin Franklin: The Enlightenment Personified
Little Pink House: Dramatizing the Horror of Eminent Domain