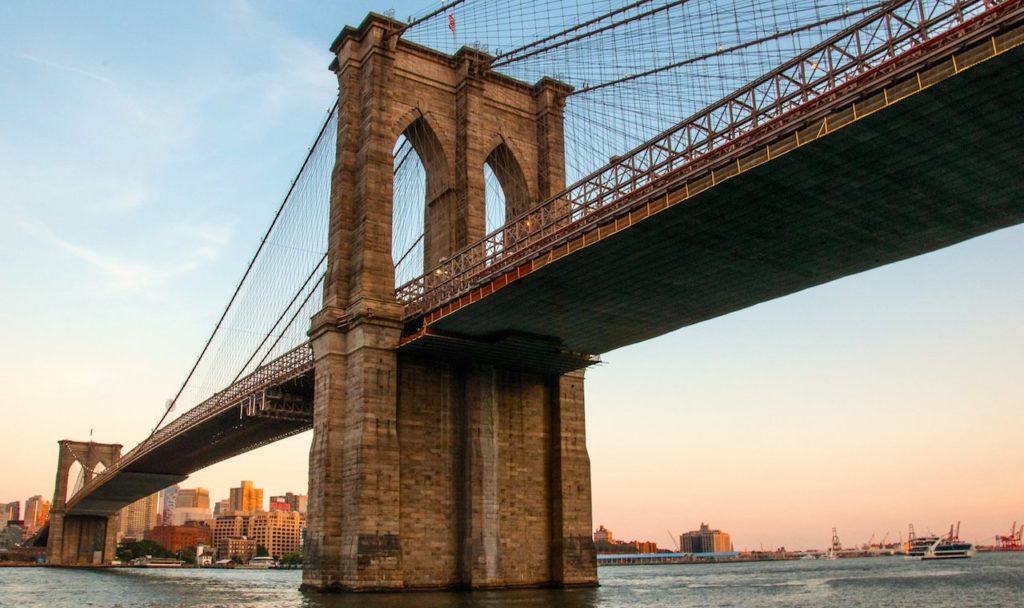 On May 24, 1883, the Brooklyn Bridge opened for public use.1 More than 100,000 people arrived by train and boat to celebrate the event, leaving no vacancies in nearby hotels. Huge American flags decorated each side of the great bridge. When the sunny day gave way to evening, fourteen tons of fireworks punctuated the jubilation for an hour.

One heroic family deserves most of the credit for this national treasure: the Roeblings. John Roebling conceived and designed the great bridge. His son, Washington, oversaw its construction. Washington’s wife, Emily Warren, took charge when her husband was incapacitated by illness.

Thirty years earlier, Roebling and Washington had visited New York, where they had an experience that would change their lives and reshape the city. In The Great Bridge: The Epic Story of the Building of the Brooklyn Bridge, David McCullough describes the incident in which the two were stranded on the frozen East River for “several miserable hours on an icebound ferry” and the impact this event had on them. Given John Roebling’s take-charge temperament, McCullough writes, “it was doubtless an infuriating experience, to be at the mercy of such elementary forces. But as a result, . . . Roebling, his son by his side, ‘then and there saw a bridge in his mind’s eye.’”2

The Industrial Revolution had been underway in America for decades, and Roebling typified that era. He had already built a company that manufactured wire rope and had made a fortune. Shortly after the Civil War would end, he would begin reshaping nature in a whole new way.

Roebling loved science, art, and business, and his vision for the Brooklyn Bridge would blend all three:

The completed work, when constructed in accordance with my designs, will not only be the greatest bridge in existence, but it will be the greatest engineering work of the continent, and of the age. Its most conspicuous features, the great towers, will serve as landmarks to the adjoining cities, and they will be entitled to be ranked as national monuments. As a great work of art, and as a successful specimen of advanced bridge engineering, this structure will forever testify to the energy, enterprise and wealth of the community which shall secure its erection.3

History proved him right. Roebling pioneered the design of steel suspension bridges, and steel was the material of the future. He faced opposition, though, as skeptics cited the many bridges that had failed under the forces of weight and wind. However, Roebling’s great innovation—a web truss added to either side of a bridge roadway—would silence the critics. This new design stabilized bridge construction and made such engineering problems a thing of the past.

When the East River froze over again in 1867, the need for the bridge he had envisioned became imminent. Brooklyn Eagle owner, Henry Murphy, formed the New York Bridge Company to finance the project. Roebling invited the leadership of the firm to visit the sites of his other bridges in the Midwest. They approved his plan and appointed him chief engineer. At sixteen hundred feet in length, it would be by far the longest steel wire-cable suspension bridge to date.

The obstacles seemed insurmountable. Ferry companies, which made around one thousand crossings per day, protested the encroachment on their business and attempted to influence corrupt politicians. Much of the bridge’s supporting structure had to be constructed under water, and violent currents made this extremely dangerous.

In 1869—even before construction began—tragedy struck. While Roebling was surveying the East River, his foot was crushed by a docking ferry. He developed a tetanus infection and died three weeks later. Before uncertainty could doom the project, Roebling’s thirty-two year-old son, Washington, stepped up and took his father’s place as chief engineer.

Washington had taken rigorous engineering courses at Rensselaer Polytechnic Institute. He also served as an officer in the Civil War, during which he fought at Gettysburg and built bridges for the Union. After working alongside his father, Washington spent a year in Europe learning about the latest developments in bridge technology.

In January 1870, with Washington Roebling in charge, construction of the Brooklyn Bridge began. Foundation workers labored inside massive wooden boxes called caissons, excavating the riverbed. These airtight chambers lay at the river’s floor, held in place against the current by enormous granite blocks. Pressurized air was pumped in to keep out water and debris.

As work progressed, many laborers became ill. Rapid ascension from the depths of the East River led to an imbalance of nitrogen in the blood. This gave them headaches, itchy skin, bloody noses, and slowed heartbeats. Next came joint pain, vomiting, convulsions, numbness, speech impediments and, in some cases, death. These symptoms and the underlying sickness soon came to be known as “the bends” or caisson disease. Washington himself spent numerous hours in the caissons until he too contracted the disease, which soon paralyzed him from the waist down.

Although he could no longer visit the work site, this did not end Washington’s involvement. He now watched developments through a telescope from his Brooklyn apartment window. As work went on, several people tried to remove him from the project. His paralysis was not the sole reason.

Workers were suffering accidents, explosions, and fires, which in addition to causing injuries and death, also caused construction delays. Washington also faced conflict-of-interest charges. His father’s ingenious design called for thousands of miles of wire-cable, which was to be sourced from the family enterprise. Other manufacturers predictably clamored that this arrangement was unfair.

In the midst of all of this adversity, Washington’s wife, Emily, stepped forward. She proved to be as resilient as her husband and father-in-law. McCullough describes Emily’s competence: “In truth, she had by then a thorough grasp of the engineering involved. She had a quick and retentive mind, and a natural gift for mathematics and had been a diligent student long before her husband was incapacitated.”4 Under Emily’s supervision, work steadily progressed—for eleven years. When the bridge was finally completed, Emily was the first person to cross it. She rode from Brooklyn to New York (later called Manhattan) and back again, in an open carriage.

The bridge was a “wonder of Science,” an “astounding exhibition of the power of man to change the face of nature.” It was a monument to “enterprise, skill, faith, endurance.” It was also a monument to . . . “the moral qualities of the human soul.” . . . The words used most often were “Science,” “Commerce,” and “Courage.”5

In essence, it symbolized heroism and innovation. The Great Bridge triumphed over nature, doomsayers, and corrupt politicians. Its towers were the tallest structures in America. This combination of steel and stone foreshadowed the birth of the skyscraper in New York City.

Today, the Brooklyn Bridge is one of the most iconic landmarks in the world. It has been featured in films, songs, books, poems, and innumerable photographs. Frank Sinatra famously sung its praises in the film, It Happened in Brooklyn.

One hundred and twenty thousand vehicles and four thousand pedestrians cross the bridge daily. No visit to New York is complete until you’ve walked across this engineering marvel. If you haven’t yet experienced it, try walking from Brooklyn to Manhattan as the sun is setting. My eyes invariably look toward the harbor where Lady Liberty Enlightening the World stands. Just past the foot of the bridge is the financial district, and to the right, the Empire State and Chrysler buildings accent the world’s most famous skyline. It’s an experience likely to fill you with appreciation and admiration for the incredible, resilient Roebling family and the hundreds of laborers responsible for this monument to the human spirit. If you’ve yet to walk the Brooklyn Bridge and need further incentive, you may find it by watching Frank Sinatra’s tribute:

His own writings and speeches can be found on his website, Robert.Begley.com.
View all posts by Robert Begley →
Happy Birthday, Sir Arthur Conan Doyle!
Principles of the Liberal Right

1. Originally called the New York and Brooklyn Bridge, the name was shortened in 1915.