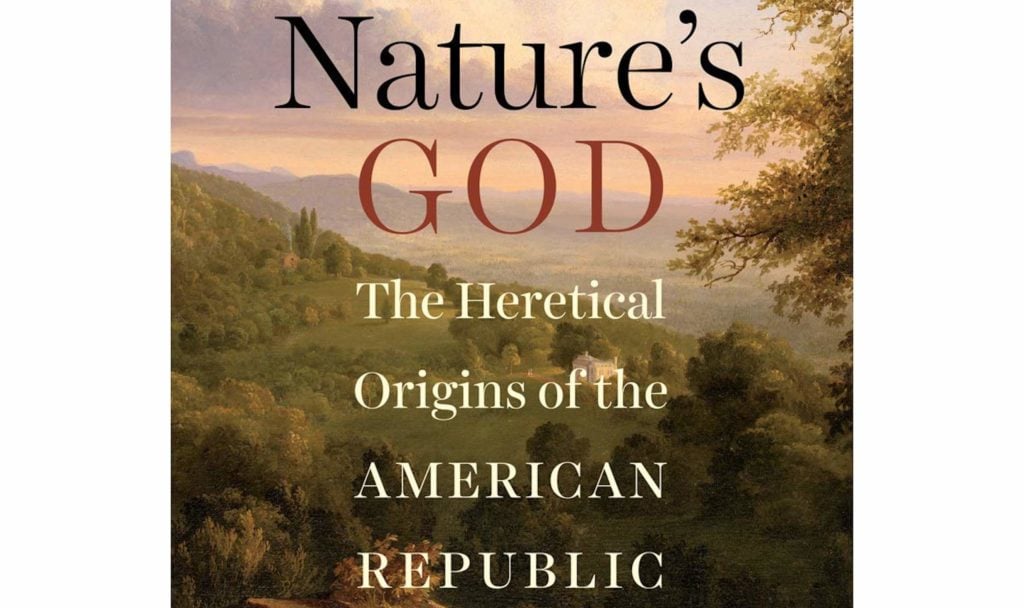 Well-read intellectuals, Greek philosophy, and atheism are what made America great. So says Matthew Stewart.

In Nature’s God: The Heretical Origins of the American Republic, Stewart dispels the entrenched narrative that the founders were devoted Christians whose values were shaped by faith and the Bible. Instead, he presents them as they present themselves in their own letters, speeches, and personal diaries. According to Stewart, the founders were heretical believers in a “god” who was constrained by the natural order or simply equated with it. They were far more interested in Greek philosophy than in the Bible, and they were fluent in the principles of Enlightenment thinkers who came before them. “In a word, America’s founders were philosophical radicals”—radicals “who rode the preceding thrust of the history of philosophy as if on the tip of a spear” (4–6).

Several of America’s founders—including Thomas Jefferson, who looms large in Stewart’s account—were self-described deists. Stewart notes that the “informed consensus” of traditional historians largely considers deism to be an enlightened form of 18th-century British Christianity: “Deism, according to this line of interpretation, was just a watery expression of the Christian religion, adulterated somewhat with the platitudes of the Enlightenment” (5).

Stewart rejects this interpretation. Deism had more to do with denying certain theistic tenets than with affirming any specific creed. Christian theists affirmed revelation; deists denied it. Theists asserted the possibility of miracles (events that circumvent or suspend natural law); deists denied it. Theists denigrated human reason as a barrier to truth; deists hallowed it as the only means of knowledge. And so on.

According to Stewart, deism began with a European revival of Greek philosophy and continued with an acceptance of natural law as incontrovertible. The “god” of the deists was utterly constrained by natural law, and his will was checked by reason. As a result, many deists adopted a form of pantheism and equated “god” with nature, an acknowledgment that the only absolute power in the universe is reality itself. Nevertheless, Stewart notes, because deists venerated Jesus as a moral philosopher, deism frequently is referred to as a form of Christianity in traditional academic circles.

The supposition of traditional scholars is that “Christian deism”—a term that Stewart considers to be “a gross oxymoron” (73)—made its way to the American colonies through European emigration and largely remained confined to the aristocracy. Stewart rejects this notion as well, arguing that deism “spread in America far beyond the educated elite” (5).

According to Stewart, “America’s revolutionary deism” was characterized by a persistent pantheistic conception of god, an idea that was substantially shaped by the Dutch philosopher Baruch Spinoza, whose influence was transmitted to the American revolutionaries through the writings of John Locke (36).

A key point in Nature’s God is that American deism was energized in large part by Lucretius’s famous philosophical poem, De rerum natura (“On the Nature of Things,” sometimes referred to simply as “Lucretius”). Although Stewart discusses De rerum natura in several places, he also dedicates an entire chapter to a brief textual history of the poem, its philosophical contents, and its particular influence on the writings and beliefs of early American leaders. Lucretius was a devoted atheist, and Stewart argues that the pervasiveness of his ideas was absolutely crucial to the development and spread of deism, which came to be known as “The Epicurean revival” in reference to Epicurus, the main character in De rerum natura.

Three Thomases serve as Stewart’s prime examples of the American, neo-Epicurean formulation of deism: Thomas Young, Thomas Paine, and Thomas Jefferson. Other deists among the founders are discussed as well, such as George Washington and Benjamin Franklin, but the lives and writings of those three and the relations between their ideas provide the setting for most of the book.

For instance, Stewart relates that Jefferson read and was influenced by both Young and Paine (among others). He was also, according to Stewart, an avowed Epicurean and “turned over to Congress in 1815 . . . eight editions of De rerum natura” in English, French, and Italian translations (79).

Moreover, Jefferson’s most important achievement, the Declaration of Independence, included the phrases “laws of nature and nature’s God” (from which Stewart’s book derives its title). According to Stewart, this signaled Jefferson’s intent to eschew any type of supernatural religion in favor of a reasoned naturalism.

Stewart focuses on the particularly heretical figures of the American Revolution but also readily acknowledges the roles played by traditional Christians. He writes:

The religious enthusiasts played an especially critical role in the establishment of a secular republic. When the time came to give force of law to the demands of religious freedom, infidels like Jefferson drafted the crucial bills while the members of dissenting sects provided the necessary votes for their passage. (69–70)

Their alliance, Stewart observes, does not imply unity. Each sought something fundamentally different from the other: Whereas the enthusiasts sought a freedom of religion, the infidels pushed for freedom from religion—that is, “an emancipation of the political order from God” (6).

Stewart strongly emphasizes that the founders aimed to perpetrate a philosophical revolution long before they ever took up arms in defense of liberty, and that the latter would have been impossible without the former. He cites an 1815 letter from John Adams to Thomas Jefferson wherein Adams writes that “the American Revolution took place ‘in the minds of the people, and this was effected from 1760 to 1775 . . . before a drop of blood was shed at Lexington’” (17).

Stewart affirms the importance of the Enlightenment, its intellectual values, and the manifestation of its ideas in America. Unfortunately however, he also maintains a general skepticism regarding the founders and their ideas. Although Stewart lauds the founders for embracing reason over religion, he also posits that they had only a partial grasp of what they were doing and that future generations may have legitimate reasons not to view them as intellectual and moral giants:

No doubt from a suitably grand perspective, the record of the founders’ activity, too, might one day be reduced to delusions and all of human civilization represented as something like an ant colony, which expresses in the totality of its operations an understanding that none of its members may be said to possess. (73–74)

Related, Stewart asserts that an “inescapable pluralism was and remains America’s greatest strength, its genuine exception to the rule of history” (69). In fact, however, “America’s greatest strength” was and remains a government based on the immutable principle of individual rights—not a plurality of views, some of which are antithetical to rights.

Despite these flaws, Nature’s God is an important, enjoyable, and worthwhile read. It provides a fascinating perspective on the Enlightenment as an “age of philosophy,” on America’s founders as “radical philosophers,” and on America as “the empire of reason” (8).

Brian Tebbitt holds a BA in philosophy and works as an independent consultant. He also blogs at makingwijgets.com.
View all posts by Brian Tebbitt →
An Officer and a Spy, by Robert Harris
Ayn Rand Student Conference 2018: Individualism in an Age of Tribalism
Return to Top