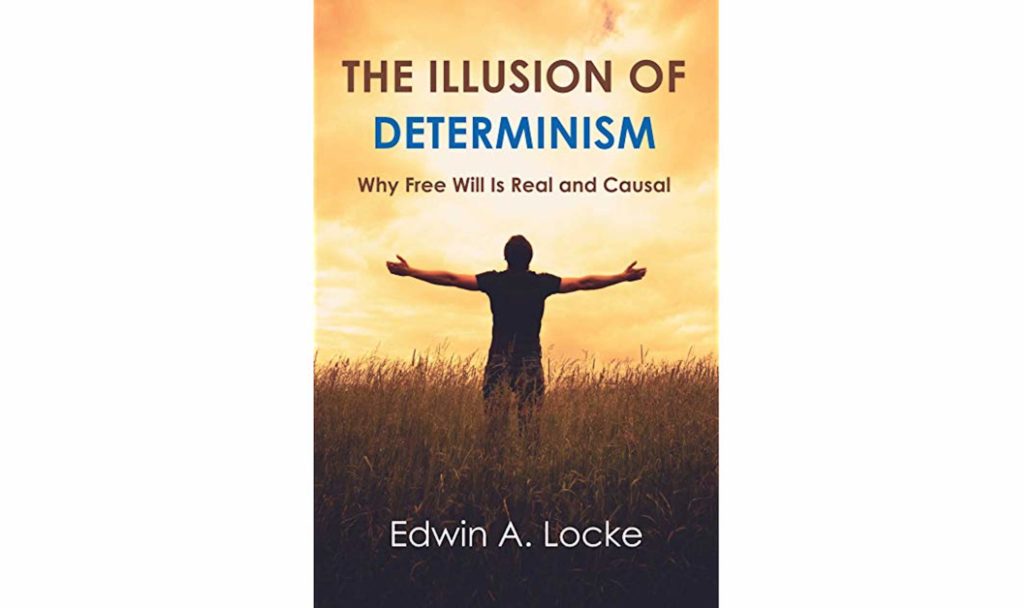 Can humans choose their actions and set the courses of their lives? Or are they passive reactors to supernatural forces or biological impulses? Psychologist Edwin Locke’s concise primer on free will, titled The Illusion of Determinism: Why Free Will Is Real and Causal, is a valuable introduction to this subject.

Locke recounts the history of the subject, beginning with Epictetus and the Stoics and working up to today’s “hard” and “soft” determinists. As he explains, hard determinists deny that an individual makes any choices; supposedly all of his decisions and actions are predetermined by forces beyond his control. By contrast, soft determinists maintain that men are both free and determined to some extent.

Locke discusses Ayn Rand’s identification that the fundamental human choice is to think or not. He demonstrates—as Rand did—that a reasoning mind is necessary for man’s goal-directed self-preservation. Referring to the automatic actions of plants as “vegetative actions,” he writes:

[G]oal-directed action separates the actions of living entities from inanimate matter. Life is conditional and must be furthered by action which fulfill [sic] the needs of the organism. In plants, action is automatic and unconscious. In animals, sense perception is added onto vegetative action. In humans, the rational faculty is added onto vegetative action and sense perception. Human survival and flourishing requires [sic] three types of integrated, goal-directed action. Humans can, for the most part, take the first two for granted because they are automatic. But reason requires deliberate self-regulation. (56)

Locke argues that free will is the most basic choice—to focus one’s mind or not—and that we all have experiences in which we can see that we have this choice. For example, he writes:

To raise one’s level of focus to the level of conceptual thought is a choice that requires effort, as does sustaining it. As a professor for thirty-four years, here is my favorite example. You are assigned reading for a course; the book has material (ideas) you have never seen before. You are sitting on a bench near the lecture hall fifteen minutes before class starts and have opened the textbook in front of you. You hold a highlighter in your hand. You start reading the first sentence in full focus. Then you start thinking: “Whew, this is new. These are long words. I have never read anything like this before. This seems hard.” You move down the page and dab the highlighter at some words you have never seen, assuming they must be important. But soon your eyes glaze over and all you see is the print on the page. You get to the end of the first page. You realize you do not have the slightest idea of what you just read. You realize you were out of focus, conceptually. You saw the printed words but gained no grasp of their meaning at all. The perception of the print was automatic; the understanding of the words was not. In the end, you did not do any actual thinking. To understand that page, you would have to start reading it all over again and remain in full focus. Everyone I have ever asked has had related experiences, usually many—and not only in reading. One can go “out of focus” about anything. (89–90)

Locke criticizes claims by some psychologists who “insist that man and chimp are really not that different,” pointing out that whereas “humans have created great civilizations,” “apes are still living in the jungle” (21). He also analyzes and refutes a host of claims alleging that human brains are not exceptional and that some animals operate at the conceptual level.

What causes you to think, to use reason? The answer is: you are the cause. The choice to think or not is self-caused, a volitionally chosen primary. This is not a denial of the law of causality but a specific form of it, a form found in human beings who possess the rational faculty. . . . Volitional causality is different from mechanical causality. . . . You can choose differently under the same circumstances. This does not violate the law of identity but reflects it. Human consciousness, like everything else[,] has a nature. (92, emphasis original)

Locke explains various views of consciousness, pointing out that the views often come in pairs, and that the pairs give the impression of an either/or choice. However, these alternatives fail to consider observable facts about human consciousness, leaving both choices untenable. For instance, determinism versus indeterminism is a false alternative because it fails to consider the third possibility discussed above: volitional causality—a fact we directly experience.

Another is reductionism versus idealism. Reductionism is the materialistic view that mind and brain are identical. Idealism is the belief that reality is fundamentally mental, that ideas have primacy over matter, and, ultimately, that ideas are the only real existents.

Locke advocates a view of consciousness and free will known as “emergence.” He writes, “I believe the most logical way to look at it is to view consciousness as an emergent faculty or power made possible by a certain type of biological structure” (16, emphasis original). This view stands in sharp contrast to the false alternative between reductionism and idealism. Emergence also explains the origin of volitional causality, so it simultaneously undercuts the false alternative between determinism and indeterminism.

Locke gives considerable attention to the experiments of neuroscientist Benjamin Libet, which allegedly refute human volition. Libet attached sensors to subjects’ brains and wrists and instructed them to flex their wrists up to forty times, recording brain activity and wrist flexion. Subjects were instructed to report when they first felt an urge to flex. Libet reportedly measured “reaction potentials” in subjects’ brains before they reported the urge to flex. Locke extracts some value from the studies—namely, that human action involves both the conscious and subconscious mind working together—while arguing persuasively that these experiments do not demonstrate determinism, as Libet and others claim they do (68–76).

Although valuable as an introduction to a monumental debate, the book has some notable flaws. Grammatical and typographical errors are almost inevitable in any publication, but the number of them in this volume is distracting. Some language is imprecise and confusing. For instance, while explaining how the choice to focus one’s mind or not is an act of free will, Locke writes, “Your choice is whether to use your free will or not” (92). But whether a person chooses to focus or not, he’s still exercising his free will.

A book can only go into so much detail on any given topic. Even so, some topics in Locke’s book require further explanation for the sake of clarity. For instance, much of the book rests on Locke’s premise that free will is axiomatic, but he spends very little time explaining what this means. Also, several topics lack useful background information. For instance, although Libet is discussed at length, Locke never mentions the scientist’s first name or profession.

Overall, The Illusion of Determinism is a valuable introduction to one of the most defining and fundamental characteristics of human behavior. It demonstrates why determinists are free to go on questioning the reality and efficacy of human volition but not free to escape the contradiction inherent in that act. Thanks to Locke’s—and Rand’s—work in this area, it’s never been more clear that determinism is but an illusion.

Jeffrey Falk is a media/entertainment professional and writer in southern California.
View all posts by Jeffrey Falk →
“Altruism: The Morality of Logical Fallacies” is Now Available in Swedish
Environmentalists’ Marching Orders for Human Extinction
Return to Top