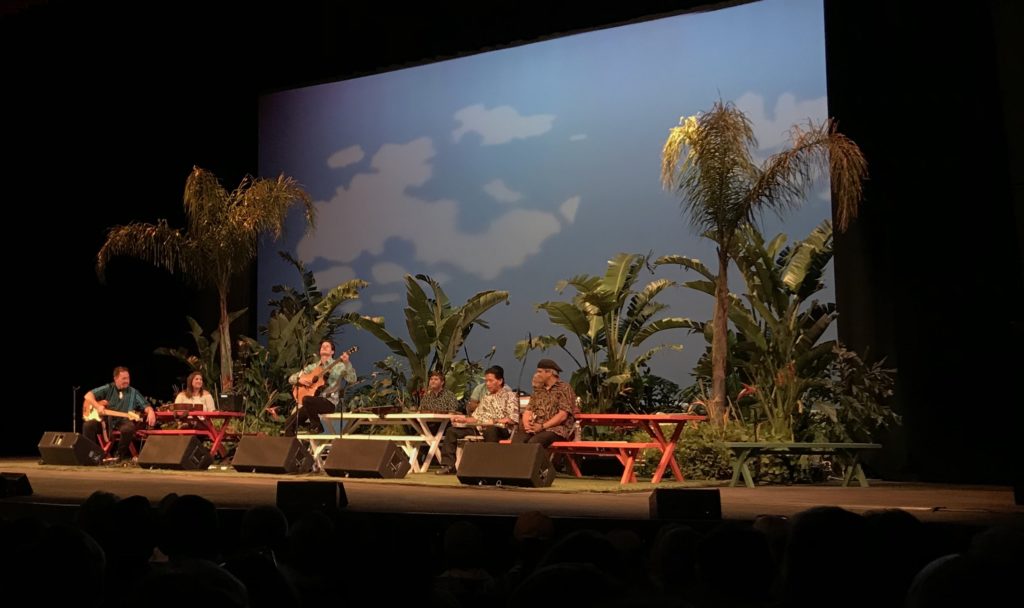 Just as Kentucky has bluegrass and Mississippi has the blues, Hawaii has slack key—a regional genre that, according to tradition, originated in the 19th century, when the first vaqueros arrived from Mexico to teach the natives to care for cattle. Herds of longhorns—descended from a few given to King Kamehameha I in the 1790s—had been allowed to roam free for decades, growing to alarming numbers and trampling crops. So the monarch summoned the Mexicans—whom the Hawaiians called “paniolos,” a corruption of “español”—to instruct the commoners in herding them. They were so successful that within decades, Hawaiian cowboys were recognized as the best in the world.

But Hawaiian ranch hands also fell in love with the paniolos’ guitars, and within a few years they were fashioning a unique brand of music that drew from flamenco, ragtime, jazz, and other styles, all played not in the standard guitar tuning, but in a variety of special tunings that they devised on their own. The result is a highly melodic, finger-picking style that’s become known as “slack key” because players must twist the tuning keys to slacken the strings.

Musicians often kept their compositions secret, passing them on only to family members instead of publishing or recording. But in 1946, twenty-five-year-old Gabby Pahinui recorded “Hi‘ilawe,” which became such a classic that virtually every significant Hawaiian musician today has released a version. Pahinui became the leading figure of the “Hawaiian Renaissance” of the 1970s, during which slack key experienced a surge of popularity. It did so again in 2011, thanks to the Grammy-winning soundtrack to George Clooney’s film The Descendants, which was comprised almost entirely of slack key music.

What’s special about slack key is its unabashed positivity. Without being cloying or clichéd, the music manages to span the emotional range from carefree to profound while consistently expressing a sense of life at once generous and appreciative. Whereas many musical forms—whether in lyrics or tune—emphasize angst, aggression, anger, and addiction, ki ho‘alu songs almost always celebrate beautiful places, romantic love, or delicious food—all delivered with a sensitive touch and an ear for the sweetness of life, a quality musicians call nahenahe, which is essential to the slack key tradition.

In fact, the performers at this week’s festival remained sanguine even while mourning the recent death of Gabby Pahinui’s son, Cyril. A celebrated slack key artist in his own right and a frequent guest at the festival, Cyril was honored with a performance of his song “Sweet Memory” (which he played at his own father’s funeral in 1980) by Kawika Kahiapo. Kahiapo’s jazzy style, upbeat and rich in arpeggios, has made him a favorite among slack key fans, most notably the popular Hawaiian musician Jack Johnson. His sound also meshed well with the singing of Teresa Bright, well known for her cocktail-lounge vibe. Their performance of the romantic lament “Poliahu”—the lyrics of which recount the snow goddess’s longing for a lover stolen by the volcano deity Pele—was particularly arresting.

Also well-versed in the diverse influences that characterize slack key is Jeff Peterson, a Maui native, and a highly regarded composer—not only for guitar but also for orchestra, having written and recorded a three-part Concerto for Slack Key Guitar in 2016. Capable of playing everything from flamenco to rock and roll, Peterson’s solo performances are marked by crisp notes and precise phrases punctuated by “chimes” (an effect in which the performer touches a string gently to create a bell-like sound, also known as a “harmonic”).

Another prominent slack key performer is Jim “Kimo” West, best known as the guitarist in Weird Al Yankovic’s band. West fell in love with slack key mid-career and has since recorded more than a dozen albums, most recently Moku Maluhia, which has been nominated for a Grammy. His music has a contemporary quality and comes off as more spontaneous than Peterson’s. He also has an ear for the classics, and his performances of “Hula Blues” and “Sleepwalk”—one of the most famous Hawaiian songs—brought a nostalgic touch to the weekend festival. The concert concluded with Mitchell Chang’s rendition of “What a Wonderful World,” a song that’s become a favorite for Hawaiian musicians.1

Timothy Sandefur holds the Duncan Chair in Constitutional Government at the Goldwater Institute and is a contributing editor of The Objective Standard.
View all posts by Timothy Sandefur →
A Saturnalia of Bunk: Selections from The Free Lance 1911–1915 by H. L. Mencken
John Adams and the Spirit of Liberty by C. Bradley Thompson

1. I couldn’t find a link to this; if you know of one or find one, please let me know.