On the ceiling of the United States Capitol building in Washington, D.C., in the chamber where every U.S. senator since 1865 has sat, a fresco depicts Mercury, the Roman god of commerce, giving a bag of gold to Robert Morris. But who was he? According to biographer Charles Rappleye, Morris was “an unabashed global capitalist—a man ahead of his time” and one “who shaped the destiny of a new nation, helping to make America what it is today.”1

At age thirteen, Morris sailed from the busy British seaport town of Liverpool, where he was born. He crossed the Atlantic, landing in America and settling in what was its largest city, Philadelphia. His father, a tobacco merchant, set him up as an apprentice at the shipping and banking firm, Willing & Co. He began by sweeping floors and sorting goods, but over the next seven years, he learned every facet of the business. Books did not interest him as much as markets, and he demonstrated an aptitude for mathematics. He rose to the role of counting house clerk (essentially an accountant), where he began to reveal his growing talent for business. Once, when his boss was away, Morris heard from a ship captain that the price of flour had spiked in European markets. The teenager purchased all of the flour available in Philadelphia and shipped it to Europe, where it would bring his company a premium.

A few years later, he was promoted to partner, and the firm changed its name to Willing Morris & Co. By the time Morris was twenty-one, it was the largest mercantile house in Philadelphia.

Morris was tall, strong, benevolent, and jovial. He often mixed business with pleasure. He remembered his humble origins, knew the names of dock workers, tipped bartenders well, and often conducted business with a glass of wine in hand. He held that personal integrity was the greatest of assets and said, “I declare that the character of a real merchant, a generous, open and honest merchant, is a character I am proud of.”2

Morris brought a can-do, creative spirit to his trade. In 1756, the cost to insure ships through the traditional English companies was exorbitant. So Morris organized a group of merchants and went into the insurance business, insuring his own company and others. He would also become the first American shipper to trade with China.

In 1765, when the British Parliament passed the Stamp Act and other rights-violating measures, Morris again joined with other merchants, this time to protest. Like so many Americans, Morris held out hope for a peaceful reconciliation with Britain, even after the battles of Concord, Lexington, and Bunker Hill. He represented Pennsylvania at the Continental Congress of 1776. On July 2, despite his reservations, he abstained from voting, which enabled his fellow delegates to carry the vote for independence. On August 2, he signed the Declaration of Independence. As the richest man on the continent, he had the most material wealth to lose of all the signatories when they pledged their “lives, fortunes, and sacred honor.” “This is the beginning of troubles,” he said, “but it’s better to die bravely than be starved by pickpockets.”3

During the Revolutionary War, the Continental Congress was egregiously ineffective at securing funds and resources for the war effort. Morris stepped up, using his own money and credit to procure gunpowder and other supplies for General George Washington and the Continental Army. His ships delivered tobacco to France and Spain and picked up military supplies, making possible—among many other things—the Continental Army’s critical victory at the Battle of Trenton in December 1776. Morris also issued $1.4 million in personal checks (called Morris notes) to the army, which were backed by his own credit. The money was used to purchase flour, horses, boats, and wagons, all of which were crucially important to the American victory at Yorktown.

Although this victory ended the war’s battle on land, Britain still controlled the world’s most powerful navy and continued to menace Americans by sea. So Morris donated one of his own ships, The Black Prince. Renamed the USS Alfred, it became the U.S. Navy’s first ship. Morris even offered his maritime expertise, acting as de facto naval commander and devising strategies that helped Americans capture British cargo in the Atlantic and Caribbean.

However, the Brits, embittered by their defeat on land, soon stepped up their sea offensive. They shut down American shipping along the coast, which cost Morris a fortune—literally. When a friend asked to borrow money, Morris had to deny him, explaining, “What I had afloat has all been lost . . . the amount of that loss I will forbear to mention as there might be in it an appearance of ostentation.”4

By 1781, after more than five years of war, the colonies were bankrupt. Benjamin Franklin nominated Morris for the newly created position of Superintendent of Finance. Franklin knew that it would be a thankless job, and warned his friend:

You are sure to be censured by malevolent Criticks and Bug Writers, who will abuse you while serving them and wound your Character in nameless Pamphlets, thereby resembling those little, dirty, stinking Insects that attack at us only in the dark, disturbing our Repose, molesting and wounding us, while our Sweat and Blood is contributing to their Subsistence.5

Morris was reluctant, but he realized that he was perhaps the only person fit for the role—so he accepted Franklin’s nomination. Once in office, he did what one would expect of an experienced businessman: He significantly cut spending. When the government needed to make a purchase, he got businesses to bid for the contract, thus reducing both cost and favoritism. And he generally tightened accounting procedures.

Most important, Morris understood that America needed to progress beyond the agrarian mind-set—which held that land is the basis of all value—and to leverage credit, debt, and banking to build the nation’s economy.

Historian James J. Ellis writes that Morris “brought a way of thinking about money that did not yet have a name. The term capitalism did not appear until 1850. The key concept in this emerging mentality was credit, a word derived from the Latin credere, meaning ‘to believe.’”6 By and large, European bankers and governments had been skeptical that the United States was capable of honoring its debts. But no one was skeptical of Morris. He had long since established his integrity on the world stage. Thus, he used his own credit to build that of the fledgling nation. 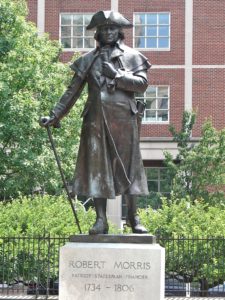 Statue of Morris in Philadelphia

In 1781, Morris also founded the first bank in the United States: the Bank of North America. Aiming at national solvency, he said, “I mean to render this [bank] a principal Pillar of American Credit so as to obtain the money of individuals for the benefit of the Union and thereby bind those individuals more strongly to the general cause by ties of private interest.”7 He stated proudly that the bank was “not dependent on government. I am very glad it is not. The moment it becomes dependent on government, that moment it is destroyed.”8 According to Rappleye, Morris’s view was that “the primary role government should take in the affairs of commerce was to get out of the way.” “I assert boldly,” wrote Morris, “that commerce ought to be free as the air, to place it in the most advantageous state to mankind in general. Our traders are remarkable for their spirit and daily forming those enterprises you wish for.”9

Interestingly, this champion of self-interested free enterprise also became the first person to use the dollar sign on official documents.10

Despite Morris’s incredible feats of intellect and will as the nation’s new Superintendent of Finance, Franklin had predicted correctly. Commentators and politicians dependent on Morris’s intelligence and experience heaped scorn upon him regularly. Arthur Lee encapsulated the irony and injustice when he scoffed, not as compliment but as criticism, that Morris had “produce[d] [him]self as the Atlas on which the United States entirely rest.”11 Frustrated by the weak national government, which was hamstrung by the Articles of Confederation, and weary of the constant assaults on his character, Morris resigned as Superintendent of Finance in 1784.

In 1787, although public life had been unkind to him, Morris acquiesced in his election to the Constitutional Convention. Then, two years later, when George Washington was elected first president of the United States, he asked Morris to be the nation’s first secretary of the treasury. By then, Morris had had enough of such roles. He declined, suggesting instead someone whom he had spent the past decade grooming for the role, Alexander Hamilton. “He knows everything,” attested Morris. “To a mind like his nothing comes amiss.”12 As true as these words were, Hamilton’s success stemmed in part from the fact that he continued policies that Morris had originated and instituted ones that he had recommended.

Morris did not escape political office entirely; in 1789, he was elected senator from Pennsylvania. He proposed that Philadelphia be the temporary capital for the United States, and his proposal was accepted. So in 1790, he offered his newly renovated home, a luxurious three-and-a-half story brick mansion built in 1767 on Philadelphia’s bustling Market Street, to President Washington. And when Washington held his weekly state dinners, Morris was the guest of honor, seated at Washington’s right hand.

Unfortunately, during the mid- to late-1790s, Morris made some bad land deals that cost him his fortunes and landed him in debtor’s prison for three and a half years. When he got out, he lived his last few years modestly. But his reputation suffered greatly. Rappleye suggests that Morris’s impact and legacy has been underappreciated because he was “too rich to be a folk hero, and the ultimate failure of his personal fortune robbed him of any Midas-like mystique.”13

Whatever the reasons, we can be certain that Morris has been underappreciated. After all, this self-made immigrant helped make the Revolution possible in more ways than one, then laid the foundations upon which America’s essentially capitalist financial policies would be erected. So next time you see the dollar sign—the universal symbol of free minds and free markets—take a moment to remember America’s financial Atlas.

The next time you see the dollar sign—the universal symbol of free minds and free markets—take a moment to remember America’s financial Atlas: Robert Morris. Click To Tweet

His own writings and speeches can be found on his website, Robert.Begley.com.
View all posts by Robert Begley →
New Speakers & Talks Announced for TOS-Con 2019
Millard Sheets and the Art of Banking