View cart “Digital Minimalism: Choosing a Focused Life in a Noisy World by Cal Newport (pdf)” has been added to your cart. 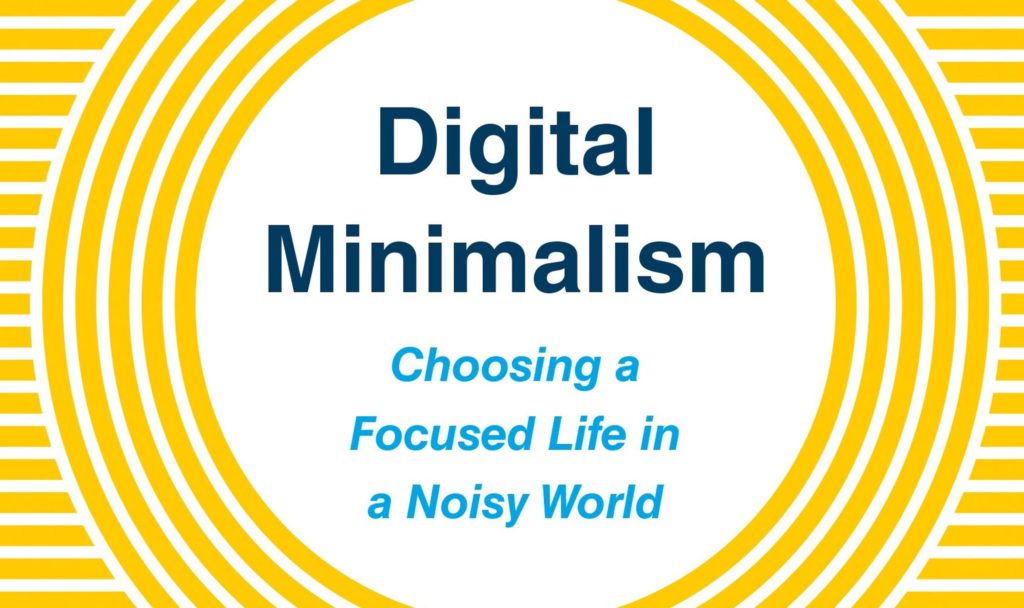 Digital technologies, such as smartphones, social media, and streaming services clearly provide value to lots of people, but they can also have serious drawbacks. Amid responses to his book Deep Work, Cal Newport was surprised by the number of people who complained about the pitfalls of such technologies. So he began interviewing his readers and studying the topic. “A common [theme] I heard in these conversations about modern digital life was [the] exhaustion . . . of having so many different shiny baubles pulling so insistently at their attention and manipulating their mood” (x). Many people described their interaction with digital technologies as resulting in a loss of control over their attention, time, and lives.

So, in response, Newport wrote Digital Minimalism, which details a new strategy for technology use. He writes:

Digital minimalists see new technologies as tools to be used to support things they deeply value—not as sources of value themselves. They don’t accept the idea that offering some small benefit is justification for allowing an attention-gobbling service into their lives, and are instead interested in applying new technology in highly selective and intentional ways that yield big wins. . . . [D]igital minimalism is . . . about cultivating a life worth living in our current age of alluring devices. (252–53)

Newport’s explanation that “clutter is costly” highlights the fact that all technologies have costs, which can sometimes outweigh their benefits. For example, if someone wants to be exposed to new people and ideas, he might spend time on Twitter. But this could easily absorb, say, ten hours per week, which, for many people, is more time than it’s worth. “It’s easy to be seduced,” says Newport, “by the small amounts of profit offered by the latest app or service, but then forget its cost in terms of the most important resource we possess: the minutes of our life” (42).

In explaining his second principle—“optimization is important”—Newport discusses maximizing the benefits we get from technology. For instance, the Twitter user mentioned above might apply this principle by deciding to delete his Twitter account, choosing instead to meet new people and learn about new ideas by attending conferences and public talks. Thus, he saves himself several hours per week and engages in higher-quality social interactions. Maybe he’ll find that particular features of certain apps are useful for finding such conferences and talks. He could then set aside time at the beginning of each month to select events to attend. And he might use a calendar tool such as Google Calendar to remind himself of the event details.

Newport illustrates his third principle—“intentionality is satisfying”—with the story of Laura, a schoolteacher from Albuquerque, New Mexico, who has never owned a smartphone. She told Newport that “[her] decision to not use a smartphone gives [her] a sense of autonomy” (56).

Newport says that making a gradual transition to digital minimalism doesn’t work as well as a quick transition because the “addictive” nature of many technologies makes it easy to backslide. So, to help readers adopt digital minimalism, he offers what he calls the digital declutter, a thirty-day “detox” program field-tested by more than sixteen hundred people.

The declutter proceeds in three steps: First, decide which technologies you can do without. He calls these technologies “optional,” and they include any that you can stop using without “harm or [significant disruption to] the daily operation of your professional or personal life” (64). Understanding that many people must use technologies for work and that using these could easily bleed over into personal time, Newport recommends establishing clear operating procedures that define what, when, and how to use them.

The next part of Newport’s program calls for abstaining from using any optional technologies for thirty days. During this time, he says, “you must aggressively explore higher-quality activities to fill in the time left vacant by the optional technologies you’re avoiding” (74). Newport notes that most of the testers who failed to do this struggled with anxiety and boredom.

Finally, reintegrate some of those optional technologies back into your life, but only if they satisfy three criteria. First, the technology must serve something you value deeply. Merely offering minor benefit isn’t enough. Second, it must be the best way to serve that value. If it isn’t, replace it with something that is. Finally, its role in your life must be constrained with “a standard operating procedure that specifies when and how you use it” (77).

Newport also advises readers to seek solitude regularly. He stresses that solitude isn’t physical isolation from other people. Instead, it’s mental isolation in which you are free from others’ thoughts. He says:

You can enjoy solitude in a crowded coffee shop, on a subway car, or, as President Lincoln discovered at his cottage, while sharing your lawn with two companies of Union soldiers, so long as your mind is left to grapple only with its own thoughts. (93–4)

Newport holds that, in today’s digital world, it’s possible to continuously distract oneself from one’s own thoughts, which can lead to psychological problems. Newport contends that record numbers of teens and young adults with anxiety-related disorders are evidence of these problems. He suggests achieving solitude by occasionally leaving your phone at home or going for long walks where you can be alone with your thoughts.

Digital Minimalism provides a wealth of guidance for turning down the volume of “digital noise,” with advice on everything from how not to use social media to cultivating rewarding leisure pursuits.

The book does have a few flaws, the most serious being Newport’s misidentification of the fundamental cause of the problem he seeks to solve—that of dealing with the drawbacks of technology. In the first chapter, he convincingly argues that today’s technologies are engineered to be as “addictive” as possible. But, says Newport, we didn’t just stumble into this digital life. “[I]t’s probably more accurate to say that we were pushed into it by the high-end device companies and attention economy conglomerates who discovered there are vast fortunes to be made in a culture dominated by gadgets and apps” (9). But this argument ignores the fact that people freely choose which technologies to use and how to use them. Companies such as Facebook, Twitter, and Google don’t force anyone. And as Newport’s own work shows, the extent to which people use technology in unhealthy ways is the result of failing to think carefully about such use. Newport also indulges in some gender pronoun irrationality, which makes for some confusing passages in the final chapter.

Despite these flaws, Newport’s positive message is sound: We can all benefit from being selective when it comes to using technology. And the ideas that Newport offers for deciding which technologies to use and how to use them make Digital Minimalism a valuable read.

Jonathan Townley is an aerospace engineer working in the defense industry.
View all posts by Jonathan Townley →
Craig Biddle to Speak in Bulgaria and UK on Self-Interest, Individualism, Government
Flying Is Safer Than Eating
Return to Top