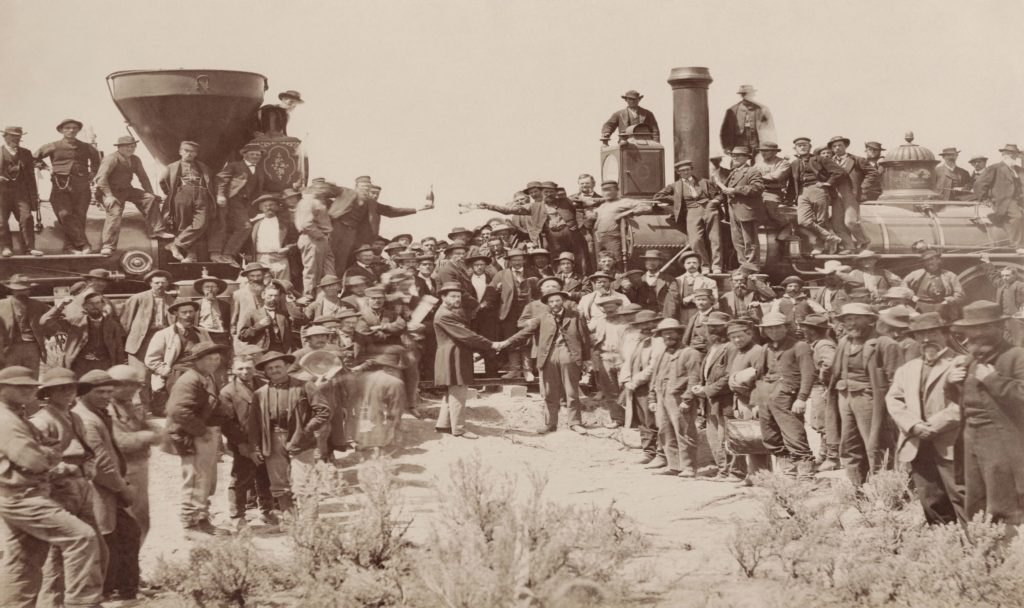 The condition of the people of America is so different from aught that we in Europe have an opportunity of observing . . . They are great travellers, and in general better acquainted with the vast expanse of country, spreading over their eighteen states . . . than the English with their little island. They are also a migrating people, and even when in prosperous circumstances, can contemplate a change of situation, which under our old establishments and fixed habits, none, but the enterprising, would venture upon, when urged by adversity.

—Morris Birkbeck, Notes on a Journey in America from the Coast of Virginia to the Territory of Illinois, 1818

Prior to 1869, overland travel in America was slow, grueling, and dangerous. The Oregon, California, and Mormon wagon trails—collectively known as the Emigrant Trails—were the three most widely used overland routes. Historians estimate that at least five hundred thousand emigrants traveled them between 1843 and 1869, and many paid a high price for doing so; approximately sixty-five thousand settlers died from disease, accidents, exposure, starvation, and Indian raids during that twenty-six year period. If one were to place a marker for each of their graves, evenly spaced along the entire length of the Oregon Trail, there would be one every fifty yards from Missouri to Oregon City.1 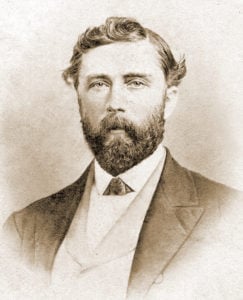 By the 1850s, rail lines were already prevalent in the eastern half of the United States, but they were mostly short, isolated freight lines. There were virtually no rail lines west of Missouri at the time—certainly none for transporting large numbers of passengers.2 Recognizing the critical need to make overland travel faster and safer, physician and businessman Hartwell Carver first proposed a transcontinental rail route to Congress in 1832, but they dismissed the idea as financially unjustifiable. Over the next thirty years, Carver regularly wrote articles and spoke publicly about the need for such a rail line.3 As early as 1860, Sacramento Valley Railroad’s chief engineer, Theodore Judah, already was leading months-long scouting expeditions through the Sierra Nevada mountains in search of the most practical path for a train. He, together with a miner named Daniel Strong, discovered and mapped the route that eventually would be used.4

In 1862, Carver’s dream was realized when Congress passed the Pacific Railway Act, which awarded large land grants and government bonds to the Western Pacific, Union Pacific, and Central Pacific railroad companies. However, Western Pacific ultimately laid only 132 miles of track from Oakland to Sacramento, California. The vast majority of the line was built by the other two companies.5

Unfortunately, the federal government’s involvement in financing the project created perverse incentives. A relatively small portion of the necessary funds came from private investors, but the lion’s share came from government coffers. Thirty-year government bonds were issued, and the railroad companies were paid between $16,000 and $48,000 (about $402,000 and $1.2 million in 2019 dollars) per mile of track laid.6 The railroad company owners and foremen were improperly incentivized—because they were paid largely according to an arbitrary government metric rather than by reference to actual market conditions—and some of them, regrettably, took the bait. At least 225 miles of extra, unnecessary track were laid by both companies, purely for the purpose of padding their invoices to the government.7 Most notably, Thomas Clark Durant, the primary shareholder and vice president of Union Pacific, created multiple shell companies and used them to effectively double-dip in the seemingly endless pot of government subsidy funds.8

In 1863, Central Pacific (which, in 1864, changed its name to Central Pacific Railroad of California), began laying track from Sacramento and working eastward. Because the Civil War already had been underway for two years, both materials and local workers were hard to come by. At the time, the eastern half of the United States was much more industrialized than the west, so nearly all of the materials for the track were shipped by boat from eastern ports, either all the way around South America or to Panama, where they would be offloaded, shipped a short distance by train, and then delivered to Sacramento by boat.9

The Central Pacific workforce was comprised primarily of Chinese laborers, who by then were landing in California in droves as they fled the horrific Taiping Rebellion back home. Most planned to work in America for several years and return to China with sizable nest eggs once it was safe to do so. On average, they were paid $30 to $35 per month—a small fortune by the standards of their homeland—so competition for railroad jobs was almost as fierce as it was for the even more lucrative jobs in the gold mines of California.10 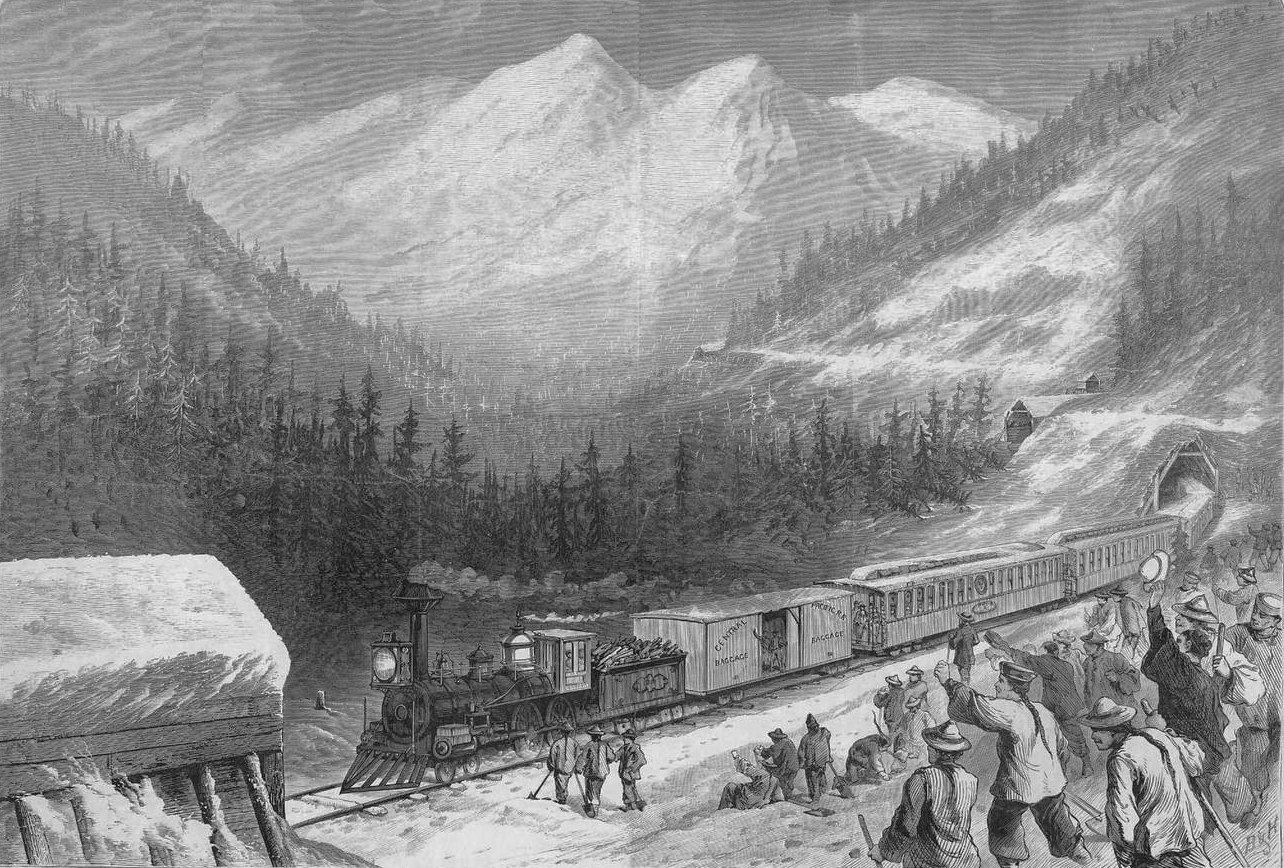 Largely due to the Central Pacific’s zealous use of nitroglycerin to quickly blast tunnels through mountains and the exceptional work ethic of their primarily Chinese workforce, they made steady progress eastward and even set a record that still stands today by laying ten miles of track in a single day.11 Dozens of workers (almost certainly not hundreds or thousands, as some sources claim) were killed in a variety of on-site accidents and by Indian raids.12 Nonetheless, competition for the jobs never dwindled, and Central Pacific never wanted for laborers.

Nearly all of Central Pacific’s manpower from 1862 to 1867 would be spent digging and blasting through the Sierra Nevada mountains. In terms of distance “as the crow flies,” only about 20 percent of the 690 miles of track the company would eventually lay ran through the mountains, but this was extremely difficult terrain, and often it would slow progress to an agonizing crawl. Central Pacific would spend the next five years slowly but steadily conquering the massive mountain range while the Union Pacific crews made less consistent progress. 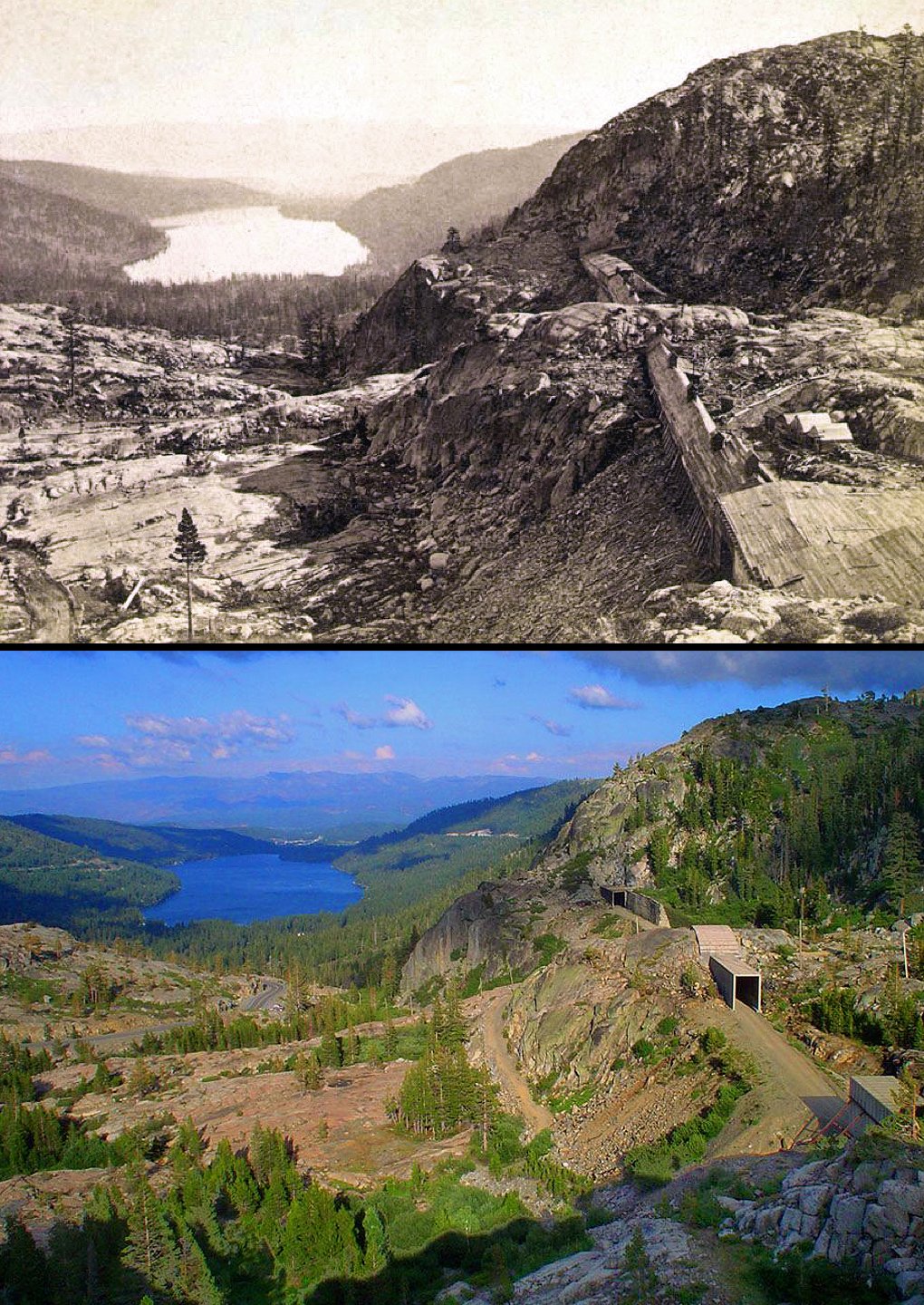 Union Pacific initially encountered great difficulty in raising capital, partly because Durant, its vice president, created a mostly illegal quagmire of financial paperwork, which enabled him to siphon off a substantial amount of money from the project and left it hamstrung for years.13 The company also had trouble getting materials in 1863 because manufacturers in the eastern states were reeling from the financial impacts of the Civil War and because Central Pacific had already secured exclusive contracts with many suppliers. When the Civil War finally ended in June 1865, Union Pacific at last was able to secure sufficient raw materials—albeit at premium prices.

All of this meant that the westbound half of the line didn’t make any significant progress until nearly two full years after the eastbound portion was well underway. Durant and several other cronies also had begun lobbying (i.e., bribing) legislators in 1864, handing out sums totaling more than $400,000 (nearly $6.5 million today).14 It had the desired effect: Congress passed a revised Pacific Railway Act, which doubled land grants and removed limitations on individual stock ownership, creating opportunities and incentives for even more cronyism.

Durant—perhaps fearing detection—reduced the amount he was skimming from Union Pacific’s books, which allowed the westbound line finally to gain financial momentum. Now it needed a steady supply of labor, which turned out to be much easier to come by than the money had been. The war-torn South provided few economic opportunities, especially for blacks, many of whom were anxious to put as many miles as possible between themselves and their former “owners.” Union Pacific hired many displaced former slaves, discharged Confederate and Union soldiers, and Irish immigrants, all of whom were eager for steady long-term work.15 These culturally diverse workers became united in purpose—the pursuit of fair pay for honest work—and they made swift and largely unimpeded progress toward Utah for two years.

In the winter of 1867, the Union Pacific line reached Evans (aka Sherman’s) Pass, just outside what is now Cheyenne, Wyoming. At 8,247 feet above sea level, the pass is the highest point along the path of the transcontinental railroad. Just a few miles west lies Dale Creek Canyon, which would require the construction of an extensive bridge to span it.16 Both the pass and the canyon presented substantial and dangerous engineering challenges that would take thousands of workers and a crack team of engineers months to overcome—but overcome them they did, and amazingly, with no recorded fatalities. 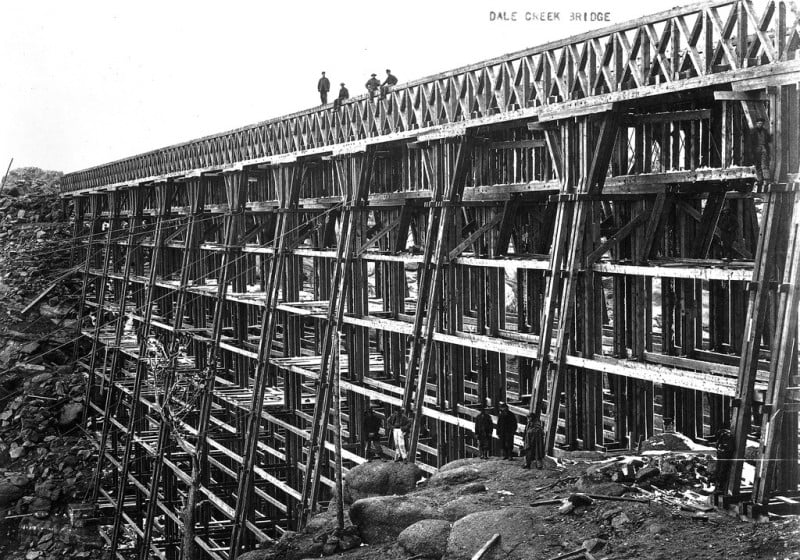 The following year, in 1868, the Union Pacific crew reached Utah. The company hired thousands of Mormon workers to help grade the land in the inhospitable Weber River Canyon, far ahead of the track layers. This section of the project wasn’t especially dangerous, but the terrain was uneven, and enormous chunks of stone frequently had to be cut away from the canyon walls, so progress was slow. Once the original Union Pacific crew cleared the canyon, the Mormon workers joined them to help lay the final stretch of track from Ogden to the finish line at Promontory Point.

Uncannily, the two companies had reached the meeting place at almost exactly the same time, with Central Pacific laying its final tie a mere twelve hours ahead of Union Pacific. The ceremonial golden “Last Spike” was driven on May 10, 1869.17 As it was hammered home, a simple message reading “DONE” was transmitted simultaneously to telegraph stations all around the country, marking the first-ever live mass media event. 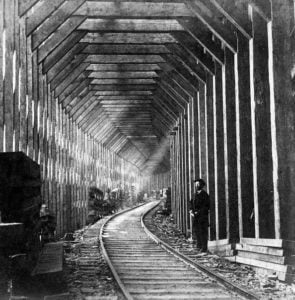 More incredible, however, was what the completed railroad made possible: Coast-to-coast travel time and cost dropped from six months and roughly $1,000 to just one week and $150. The extreme dangers that overland travelers previously had to contend with—disease, exposure, starvation, accidents, and Indian raids—all were virtually eliminated. Thousands—and ultimately, hundreds of millions—of lives would be saved, not to mention the enormous economic advantages that the line offered all Americans. The ability to quickly and cheaply transport goods and people over vast distances immediately negated the need for perilous wagon journeys and dramatically accelerated subsequent technological advancement. Indeed, the airplanes, smart phones, and high-speed internet connections that we largely take for granted today likely would have been delayed by many decades without the transcontinental railroad.

Despite the perverse financial incentives created by the federal government’s involvement, the First Transcontinental Railroad was a resounding success and a profoundly life-enhancing demonstration of human persistence and ingenuity. And despite the irrational—sometimes criminal—behavior of a few pseudo-businessmen who sought profit without production, most of the investors, entrepreneurs, foremen, and laborers who built the railroad were honest, hardworking heroes.

The Transcontinental Railroad was a resounding success and a profoundly life-enhancing demonstration of human persistence and ingenuity. Click To Tweet

Tim is the assistant editor of The Objective Standard. He also writes about personal finance, small business ownership, and video games on a freelance basis. His first novel, "The Beggar's Key," is tentatively scheduled for publication in 2020.
View all posts by Tim White →
‘Sense Being Preferable to Sound’
Leonardo Da Vinci by Walter Isaacson

1. “Life and Death on the Oregon Trail,” Oregon-California Trails Association, https://www.octa-trails.org/articles/life-and-death-on-the-oregon-trail/, (accessed May 2, 2019).

4. Author unknown, A Memorial and Biographical History of Northern California: Illustrated. Containing a History of This Important Section of the Pacific Coast from the Earliest Period of Its Occupancy and Biographical Mention of Many of Its Most Eminent Pioneers and Also of Prominent Citizens of Today (Chicago: Lewis Publishing Company, 1891), 214–21.

7. Jenny Ashcraft, “The 150th Anniversary of the Transcontinental Railroad,” Fishwrap, May 3, 2019, https://blog.newspapers.com/the-150th-anniversary-of-the-transcontinental-railroad/.

11. PBS, “Workers of the Central and Union Pacific Railroad,” 2019,http://www.pbs.org/wgbh/americanexperience/features/tcrr-workers-central-union-pacific-railroad/, (accessed May 7, 2019).