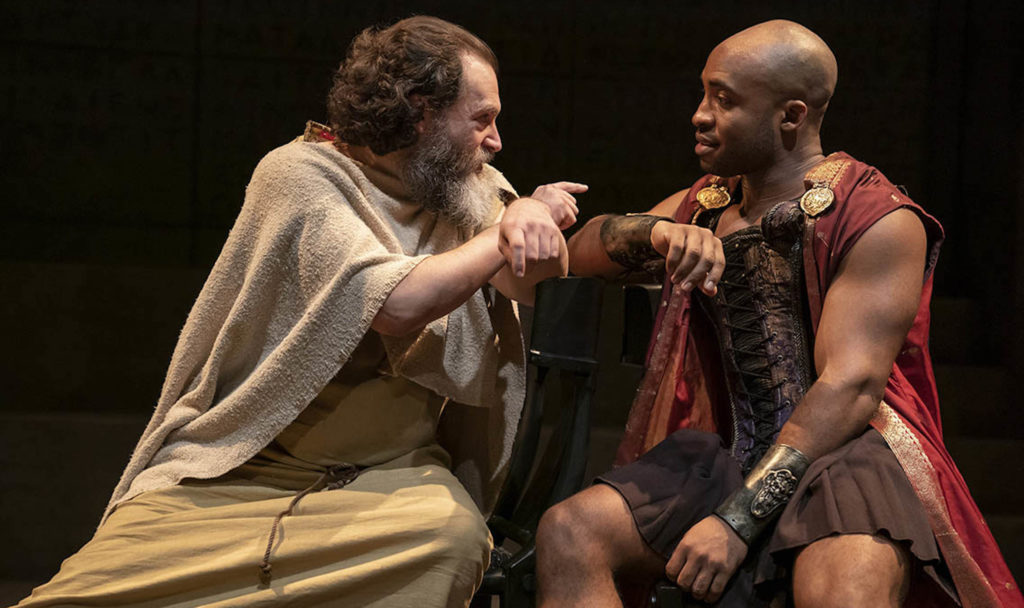 Tim Blake Nelson’s excellent new play, Socrates, retells the story of a pivotal event in world history: the trial and execution of one of the West’s first great philosophers—Socrates.1 Socrates’s life—and death—profoundly affected the two most influential philosophers in history, Plato and Aristotle.2 The play illustrates the character and ideas of these thinkers, indicates where they conflicted or overlapped, and does so via a thrilling integration of drama and discourse.

Nelson is widely known as an actor (Delmar O’Donnell in O Brother, Where Art Thou?) but not as a writer or director, though he wrote and directed the films The Grey Zone and Eye of God. Nelson began writing Socrates thirty years ago when he studied classics at Brown University.3 The current version of the play, directed by Doug Hughes (who also directed An Enemy of the People), has a top-notch cast, led by the fabulous Michael Stuhlbarg (who played Larry Gopnik in A Serious Man). The costumes, simple music, and sparse sets are so authentic that one feels transported from the Public Theater in New York City to the Agora in Athens, back in the cradle of Western civilization.4 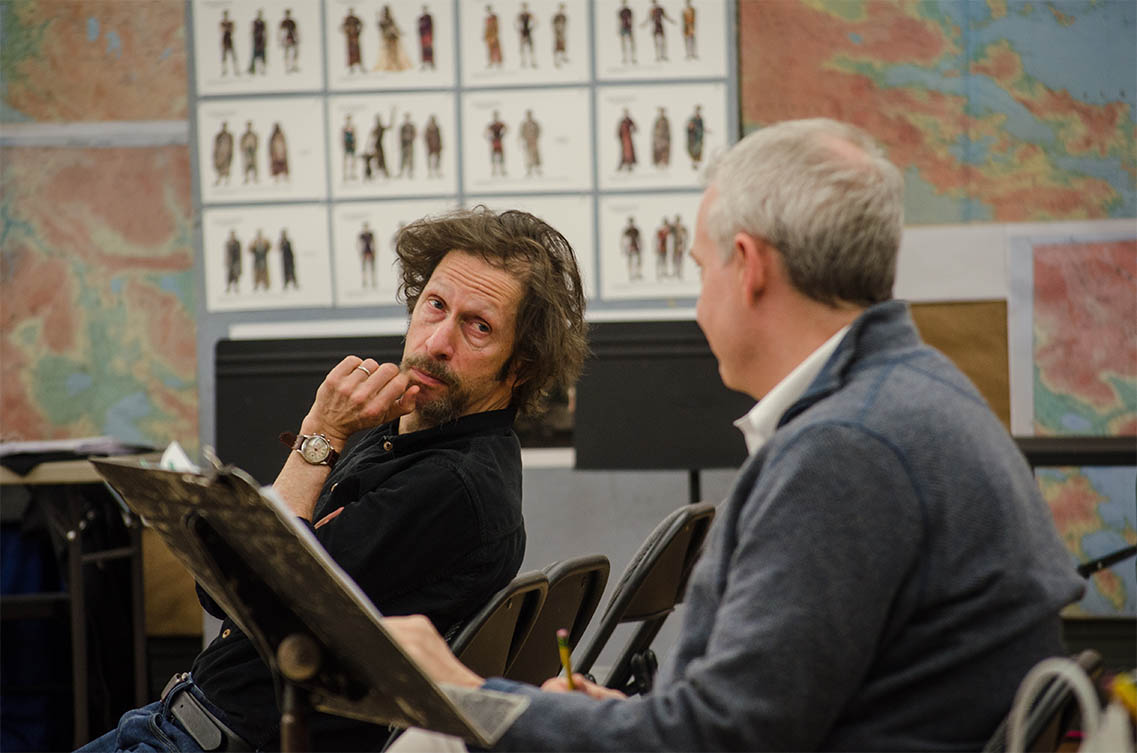 The play is set in 369 BC, thirty years after the death of Socrates, but it makes liberal use of flashbacks (and even contains scenes that blend past and present) to tell the tale of the “gadfly” of Athens. Plato (played by Teagle F. Bougere) is the story’s chief narrator, and, as the play opens, he is interviewing a potential pupil. He asks the teenage boy (played by Niall Cunningham) what he thinks of Athens, and the boy responds brashly, “I find it murderous,” referring to the city’s execution of its greatest thinker thirty years before. Plato proceeds to explain to the boy—who is, in fact, Aristotle, though he’s never named in the play—the nature of Athenian culture during the decades leading up to the death of Socrates in 399 BC. It was a period marked by tyranny, plague, and war, but where speech was still free and philosophical discourse flowed.

Throughout the play—as throughout his life—Socrates is on a quest for truth. When an oracle says that Socrates is the wisest man in Athens, he denies it and embarks on a quest to refute the claim. He seeks out those widely believed to be wise, engaging them in discourse and probing their views in order to find a superior thinker. However, one by one, these figures demonstrate their own shoddy reasoning, trapping themselves in contradictions as Socrates questions them. In his attempt to define wisdom, Thrasymachus reasons in circles, leading Socrates to the question, “So wisdom is defined by . . . what is wise?”

Later, Socrates discusses rhetoric with Gorgias, who holds that it is the master science and who puts special emphasis on the form of flowing words and exaggerated gestures. Socrates leads the conversation to the inevitable conclusion that rhetorical flourishes are typically employed as substitutes for facts and points out that such techniques are often used to convince ignorant masses to support the speaker’s position. As Socrates exposes the fallacious reasoning of these supposedly wise men, they become perplexed and angry. Meanwhile, Plato, Aristophanes, Crito, and others delight in the spectacle and in the power of Socrates’s method of questioning.

Socrates likewise challenges the city’s judicial practices. In one scene, six generals are on trial for failing to properly conduct a military mission in Sicily, in which many Athenians died.5 The court wants them tried as a group, regardless of the potential innocence of any individual general. However, Socrates—understanding that none should pay the consequences for another’s actions—argues that they should be tried separately so that each has a fair opportunity for justice. He is overruled by his fellow jurors and shouted down by the mob, who chant, “Kill them now!” The play demonstrates how easily unlimited democracy slides into mob rule: The back wall of the stage slides open, revealing the execution of one of the generals.

Later, a power-wielding politician, Anytus, blames Socrates for influencing a man who went on to desecrate statues of Greek gods, which he believes to be sacred. When the shabbily dressed philosopher explains that he has no power, no rank, no money, refuses to run for office, and does not control the actions of others, Anytus levels vague and contradictory charges, concluding in a seething rage, “If you worship gods other than those who protect us, corrupt youth, question democracy in the very place of its birth, Athens will not have you!” Anytus then turns to the audience and exclaims, “Socrates must die!”

Socrates is brought to trial. His friends and family are frightened, but they believe he can win over the jury—if he pleads his case delicately. Stuhlbarg shines here. His voice begins quietly and then rises in intensity as he passionately hurls questions at his accusers about the nature of justice and virtue. He finishes with a flourish, saying he’d rather be murdered one hundred times than stop practicing philosophy. The jury votes him guilty and sentences him to death.

The stage directing is excellent throughout as the narrative alternates back and forth between flashbacks of Socrates in action and Plato’s conversations with Aristotle. Bougere and Cunningham, in their respective roles, are at their best in these moments. Plato speaks in riddles about an idealism unreachable in this world, whereas Aristotle analyzes Plato’s story, looking for facts about human nature, our means of knowledge, and the nature of government. He is never passive, always seeking either to verify or to contradict what his elder tells him. Seeing a great deal of similarity between Socrates and the young Aristotle, Plato cautions him, saying, “Should you embrace this life, there will come a moment when you too must decide whether to engage with the political system on its terms or not” (a portent of an event not included in the play, when Aristotle was charged with impiety and forced to flee for his life, “lest the Athenians sin twice against philosophy”). 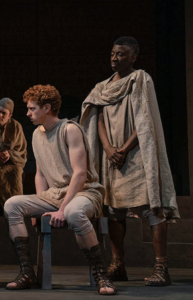 The play also provides clarifying contrast between Socrates and Plato. For instance, when Plato reveals that he believes in a mystical, nonmaterial realm and in innate ideas, Socrates makes his disagreement clear. He also intensely disapproves of Plato writing dialogues and casting him as the protagonist, saying, “Your memory will change what I’ve said, mixing your ideas with mine.” Plato swears not to put his own words into Socrates’s mouth but ends up doing so.

He admits this duplicity to Aristotle, expressing due remorse for betraying his promise to his mentor. But he excuses the breach as an act of service to philosophy and to posterity:

There is nothing more noble than the pursuit of thought. The sheer intuitive beauty of it. His method of questioning will never be matched. I’d rather he speak my words in his way, than I speak them in mine. If only to teach people not what to think, but how, which is far more important.

This is one of the central themes in the play: the importance of teaching people not what to think, but how to think. In today’s culture, when indoctrination, emotionalism—and, in some countries, censorship—often replace the art of reasoning, this one point alone makes the play worth seeing.

But its philosophic depth is by no means its only virtue; it’s also a great work of art. The writing and directing seamlessly meld past and present in ways that, although difficult to describe, are nonetheless convincing and dramatic. In one scene, for instance, as Plato speaks with his condemned mentor about the possibility of an afterlife, Aristotle watches, as if hearing Plato’s recollection. When Plato tells Socrates that, upon his death, he will ascend into a world far greater than this one, the latter dismisses this as fantasy. Plato, bridging both times, then turns to Aristotle and says, “In that way, he was most like you,” to which the boy answers, “I had already noticed that.”

In his final moments, Socrates takes a bath, as his wife, Xanthippe, scrubs his back and sobs inconsolably. When Socrates gets out of the bath, they hold hands one more time before he dismisses her. Socrates is then given the hemlock poison that everyone knows will kill him. Before drinking, he offers one last teasing remark, saying, “May my journey be a prosperous one for me, those in this world, and those in Plato’s next.” He walks a few steps, then lies down, first losing feeling in his limbs, then screaming and writhing in pain. As Plato grasps his hand, Socrates dies. Everyone on stage (and, in my experience, the audience) is in tears.

The School of Athens by Raphael

The play ends with one final exchange that distills and demonstrates the conflicting lessons that Plato and Aristotle derived from Socrates’s life and death, an exchange that sharpens the contrast between Plato’s otherworldly pessimism and Aristotle’s this-worldly optimism. Plato reveals his view of human nature and why he thought Socrates met his fate, saying that Socrates “exposed us to our lies, and we killed him for it. We simply cannot help ourselves.” Noticing that Aristotle is busily engaged with something else, he asks, “But now, what do you have for me there?” Aristotle walks to the front of the stage, sits down, and begins reading a rough translation of the opening lines of his future work, now known as his Nicomachean Ethics: “Everything we do. Every action, all we attempt is thought to be aimed at some good.”

“Let us only hope,” says Plato.

Socrates’s sold-out run at the Public Theater has been extended through June 2, and some tickets are still available. Also, Nelson is considering creating a film version. It’s not often one can say this, but Plato put it best: “Let us only hope.”

Tim Blake Nelson’s excellent play retells the story of one of the West’s first great philosophers—Socrates. Click To Tweet

His own writings and speeches can be found on his website, Robert.Begley.com.
View all posts by Robert Begley →
Joan of Arc: Heroine of France, Exemplar of Courage
Dr. Ruth: Preaching the Goodness of Sex

1. Nelson incorporates text from four of Plato’s works that cover the last days of Socrates: The Apology, Euthyphro, Crito, and Phaedo.

2. Their influence is most famously portrayed by renaissance painter Raphael in his work School of Athens.

5. Back then, jurors were drawn randomly by lottery instead of by their ability to judge the merit of a case objectively. Socrates even challenges this process, saying jurors should only be qualified if they go by the evidence.