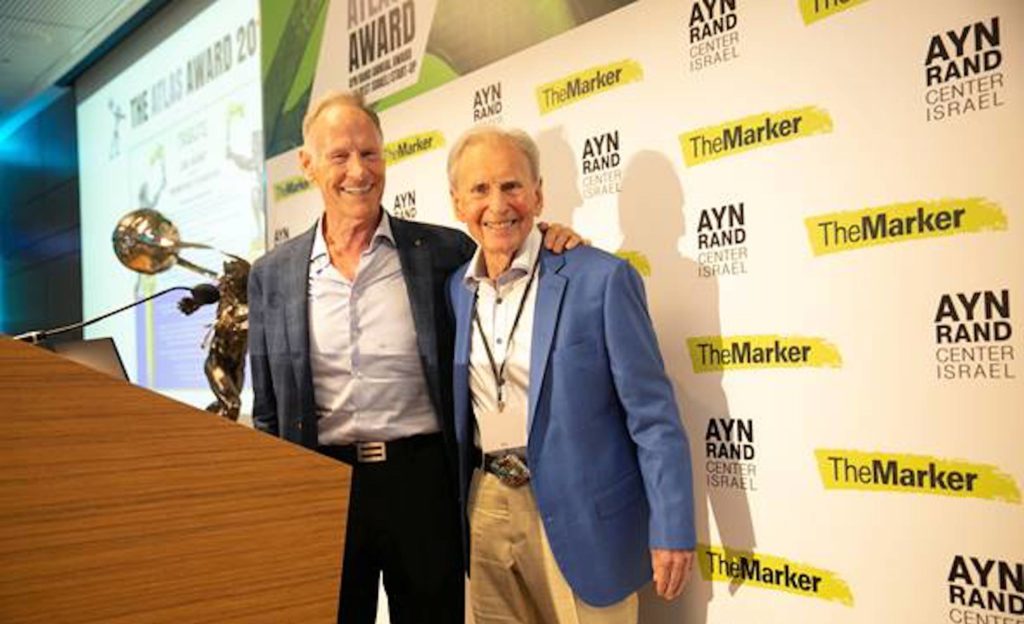 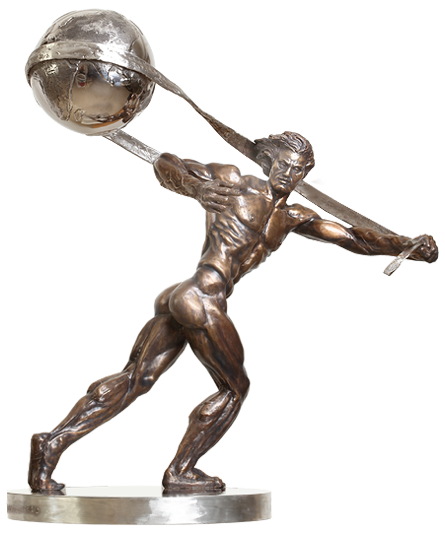 For the past four years, Ayn Rand Center Israel, in cooperation with several partners, has presented the Israeli Atlas Award to a select Israeli start-up company that has created a technology, idea, or product of exceptional value.

The ceremony is held at the Tel Aviv Stock Exchange Building, and the award is a sculpture of Atlas by the renowned sculptor Richard Minns. At this year’s ceremony on May 28, in addition to recognizing the top Israeli startup, the partners and participants recognized and paid tribute to another Atlas: Carl Barney.

Here is the tribute, which was written by Mr. Minns and presented to Mr. Barney at the ceremony. —Craig Biddle

Tribute to Carl Barney and His Prometheus Foundation

The Legend of Prometheus

Prometheus, the noble and heroic Greek Titan, loved mankind more than any God.

He stole fire from the forge of Hephaestus (Vulcan) and, holding it aloft like a lighted torch that banishes darkness, he brought it, running, to save mankind. This is the origin of the Olympic Torch.

The gift of Fire brought civilization to mortals. Prometheus also brought mankind wisdom and knowledge, including the arts and sciences.

The Reality of Carl B. Barney

Carl states: “I want others to have the same life-changing benefits as I have had from studying Ayn Rand and the Objectivist philosophy.” As the Founder / Donor of “The Prometheus Foundation,” funded with money created during his working life, Carl strives to make the world a better place for people to flourish by advancing and funding rational philosophy and Objectivism.

The Benefit to Israel

Israel has benefited from Carl Barney’s support for many years. The Ayn Rand Center Israel and the annual Atlas Award, which is given to the Best Israeli startup each year to promote and enhance Israeli entrepreneurship and Israeli startups, owes its existence to Carl Barney.

Carl Barney has a vast legacy. He has supported the Ayn Rand Institute and The Objective Standard among many others. But part of Carl’s legacy is his contributions and support of the “Start-Up Nation of Israel,” including but not limited to The Ayn Rand Center Israel, the Freedom Movement promoting individual and economic freedom in Israel, and the annual Atlas Award, which has been recognized and praised by The State of Israel.

We recognize you, Carl. We respect you. We thank you. We honor you.

Craig Biddle is editor of The Objective Standard and author of Loving Life: The Morality of Self-Interest and the Facts that Support It; Understanding Rational Egoism; and the forthcoming Forbidden Fruit for Teens: Moral Truths Your Parents, Preachers, and Teachers Don’t Want You to Know. His book in progress is “Thinking in Principles.” Biddle also serves on the board of directors of the Prometheus Foundation.
View all posts by Craig Biddle →
Deriving More Joy from One of Life’s Richest Sources
Scientific Morality and the Streetlight Effect
Return to Top