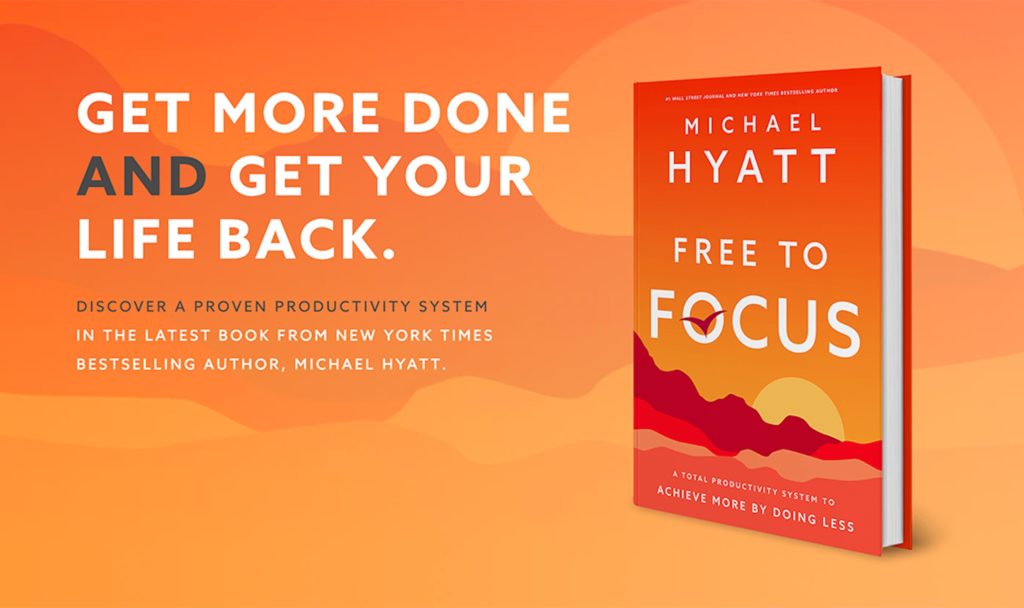 Many people think that increasing productivity is synonymous with increasing one’s efficiency at work. But according to productivity expert and executive coach Michael Hyatt, this conception of productivity leads to increased busyness and, eventually, the achievement of fewer meaningful results. In other words, many end up using the time they save with “efficiency hacks” to do more work. But “more work” can be a detriment when it replaces other more important things.

In his new book, Free to Focus, Hyatt shares his experience with the consequences of constant busyness. A former CEO of a major publishing company, he describes himself as having been “on duty 24/7 in a nonstop whirlwind of projects, meetings, and tasks—not to mention emergencies, interruptions, and distractions” (loc. 218). Eventually, his relationship with his family grew strained, and his health suffered, landing him in the ER with stress-induced chest pains. As a result, Hyatt realized he needed to reconsider his work habits—or risk developing further health problems.

In time, Hyatt concluded that the ultimate purpose of productivity is not to get more done, but to get the right things done. But most productivity systems, he says, start with advice on working more efficiently rather than on clarifying what you should be working on in the first place. Hyatt holds that this is a mistake: It’s like “leaving for a trip without knowing where we want to end up” (loc. 440). Instead, the first step to increasing your productivity begins with taking the time to clarify your objectives—both at work and in other areas of your life.

Hyatt holds that when it comes to your career, you should focus on those activities you’re both passionate about and proficient at. You will be happiest and most productive, he explains, when you can spend most of your time doing these activities. Otherwise, you either waste time by doing things you aren’t proficient at, experience energy-depleting boredom by doing things you aren’t passionate about, or suffer the drudgery of doing things you neither can do well nor care to do at all. The confluence of your passions and proficiencies—what Hyatt calls your “Desire Zone”—acts like a compass guiding your actions. Everything else is a candidate for elimination, automation, or delegation.

Hyatt also holds that maximizing your productivity requires periodic rejuvenation, which many people neglect. “Far too often,” he says, “we . . . allow our work to sit in the middle of our schedules like a whale in a bathtub. Then we try to squeeze everything else in our lives around it” (loc. 537–45). But doing this can be exhausting, leading to increased stress and burnout at work and to neglect of other aspects of our lives.

As Hyatt notes, by regularly engaging in rejuvenating activities such as getting plenty of high-quality sleep, pursuing rewarding hobbies, and cultivating fulfilling relationships, you replenish energy while nourishing all aspects of your life. As he puts it, “We can increase our energy exponentially when we [make time] for rejuvenation. Then, we can direct that energy . . . in ways designed to . . . improve our lives” (loc. 1189).

Hyatt also offers clear, actionable advice on how to put his ideas into practice. For example, despite our best efforts to achieve steady progress on our goals, many of us get off track when life gets busy. To solve this problem, Hyatt advises that you follow a process he calls the “Weekly Preview,” in which you “design your week to keep visibility on your major tasks and review your progress as you go” (loc. 2368). The process consists of six steps that, according to Hyatt, can be done (with practice) in as little as ten to fifteen minutes.

The first step of the Weekly Preview is to list your “biggest wins” from the previous week. Hyatt acknowledges that some people—especially those with high ambitions—tend to focus on their shortcomings rather than their accomplishments. But, he says, focusing on the latter “generates feelings of . . . personal efficacy” that motivate you to achieve your ambitions whereas focusing on the former can “kill your confidence” (loc. 2390).

In addition to acknowledging your accomplishments, the Weekly Preview also includes a step for reflecting on your performance during the previous week in order to determine which of your behaviors enabled progress and which need modifying. “This is where you distill your learning into an actionable lesson,” Hyatt says. “It’s also where you give yourself the opportunity to truly grow” (loc. 2405). Hyatt also holds that even when you achieve less than you desired, you should still give yourself “partial credit” for what you did accomplish. Otherwise, you deprive yourself of the pride and joy you deserve.

Another step of the Weekly Preview is to review your goals, appointments, and deadlines and to choose your “Weekly Big 3”—the three most important outcomes you must achieve in the coming week to make progress toward your goals. According to Hyatt, one of the biggest reasons people fail to make progress is that they lose sight of what’s important. As he puts it, the “hectic blur of daily work can obscure even the most important targets and tasks” (loc. 2426). This step gives you a chance to review your goals, reconnect with your motivations, and ensure that you’re still on the right path.

The final step of the Weekly Preview is to plan which rejuvenation activities you will engage in during the coming week. According to Hyatt, it’s “far too easy to drift through [your nonwork] time” when you don’t have a plan for how to spend it (loc. 2494). By scheduling your rejuvenation, you can ensure that you make the best use of that time.

Hyatt offers advice on a wide range of productivity-related topics, including creating rituals and routines, time-blocking your week, delegating effectively, and leveraging technology to maximize the time you can spend on important activities. He illustrates his ideas with plenty of real-world examples, including some from his own life. And with the inclusion of exercises at the end of each chapter, Hyatt takes his readers from theory to practice in one well-written book. Free to Focus is a worthwhile read for anyone looking to optimize his life for maximum flourishing.

According to Michael Hyatt, the ultimate purpose of productivity is not just to get more things done, but to get the right things done—and he shows how to do so. Click To Tweet

Jonathan Townley is an aerospace engineer working in the defense industry.
View all posts by Jonathan Townley →
René Marie: A Voice of Independence
Will you help TOS advance your values?
Return to Top