View cart “Scientific Morality and the Streetlight Effect (pdf)” has been added to your cart. 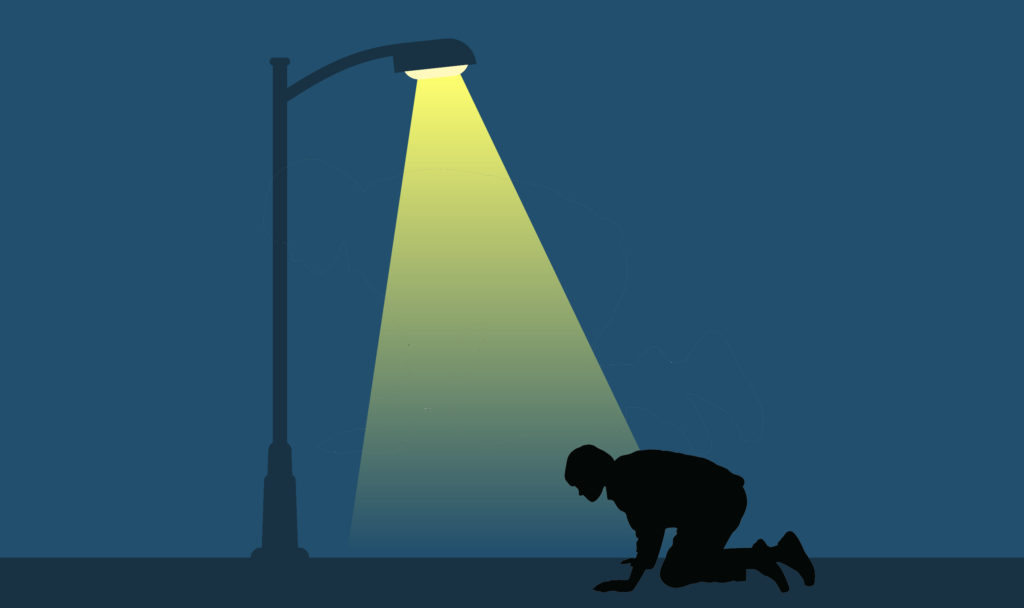 Note: This essay is included in the anthology Rational Egoism: The Morality for Human Flourishing, which makes an excellent gift and is available at Amazon.com.

Night has fallen, and a police officer sees a man on his hands and knees under a streetlight looking for something. “Can I help you?” asks the officer. “Yes,” says the man. “I dropped my key, and I’m having trouble finding it.” The officer helps the man search for a few minutes, but to no avail. “Are you sure you dropped it here?” he asks. “Oh, no,” replies the man, “I dropped it over there,” pointing to a dark area across the street. “Then why are you searching for it over here?” asks the officer. “Because,” says the man, “the light is over here.”1

A similar approach can be seen among intellectuals searching for secular, objective morality.

Sam Harris, Daniel Dennett, Richard Dawkins, and other secularists claim to be searching for a rational, fact-based, scientific morality. But they are looking for it only in the “light” of socially accepted ideas. And that is not where it lies.

Today’s socially accepted view of morality is that morality equals altruism, that being moral means self-sacrificially serving others—whether your neighbors, the poor, the community, or the like. And this is what Harris and company mean when they speak of morality.2 Their goal, as Harris puts it, is to find “better reasons for self-sacrifice than those that religion provides.”3 They reject religion but embrace the notion that “being truly good” and “ethically consistent” requires “living in a way that truly maximizes the well-being of others.”4 They hold that truly moral people are those who are “inspired by their conviction that their lives [are] not their own to dispose of,”5 those “who live their lives in effect for others.”6

But the claim that people should self-sacrificially serve others is as unscientific as a claim can be. There is literally zero evidence to support it.7 This is why, throughout the entire history of philosophy, no one ever has presented such evidence.

Scientific morality—morality arising from and grounded in evidence and logic—can be found only by looking outside the “light” of today’s socially accepted views.

To discover a fact-based, reason-based morality, one must first recognize that morality is a broader concept than altruism.8 One must see that the concept of morality subsumes several kinds or codes of morality—altruism, egoism, hedonism, utilitarianism, and others. One must acknowledge that the question of which (if any) of these codes is supported by evidence and logic is to be answered by analyzing the principles of the respective codes along with the arguments in support of them. And one must be willing to acknowledge which principles are supported by evidence and which are not.

This requires courage. It requires intellectual independence. It requires shining the light of one’s own mind on the full scope of relevant facts and following the evidence wherever it leads.

Might it be that scientific morality is, as Ayn Rand argued, a code of observation-based principles to guide you—not in sacrificing yourself for others, nor sacrificing others for yourself—but in pursuing your life-serving values and respecting the rights of others to do the same?9

There’s one way to find out. Turn on your light and shine it on the relevant facts.10

Discovering a fact-based, reason-based morality requires shining the light of one’s own mind on the full scope of relevant facts and following the evidence wherever it leads. Click To Tweet

Craig Biddle is editor of The Objective Standard and author of Loving Life: The Morality of Self-Interest and the Facts that Support It; Understanding Rational Egoism; and the forthcoming Forbidden Fruit for Teens: Moral Truths Your Parents, Preachers, and Teachers Don’t Want You to Know. His book in progress is “Thinking in Principles.” Biddle also serves on the board of directors of the Prometheus Foundation.
View all posts by Craig Biddle →
A Wonderful Tribute to Carl Barney
Tulsa’s Art Deco Heritage

1. This is my version of the fable known as the “streetlight effect.” See “Streetlight Effect” at Wikipedia for its origins and other versions, https://en.wikipedia.org/wiki/Streetlight_effect.

10. For a brief indication of how scientific morality is derived from observation and logic, see Craig Biddle, “Secular, Objective Morality: Look and See,” The Objective Standard 12, no. 2 (Summer 2017): 47. For lengthier discussions, including more detail about the guidance provided by such morality, see Rand, The Virtue of Selfishness; and Biddle, Loving Life.