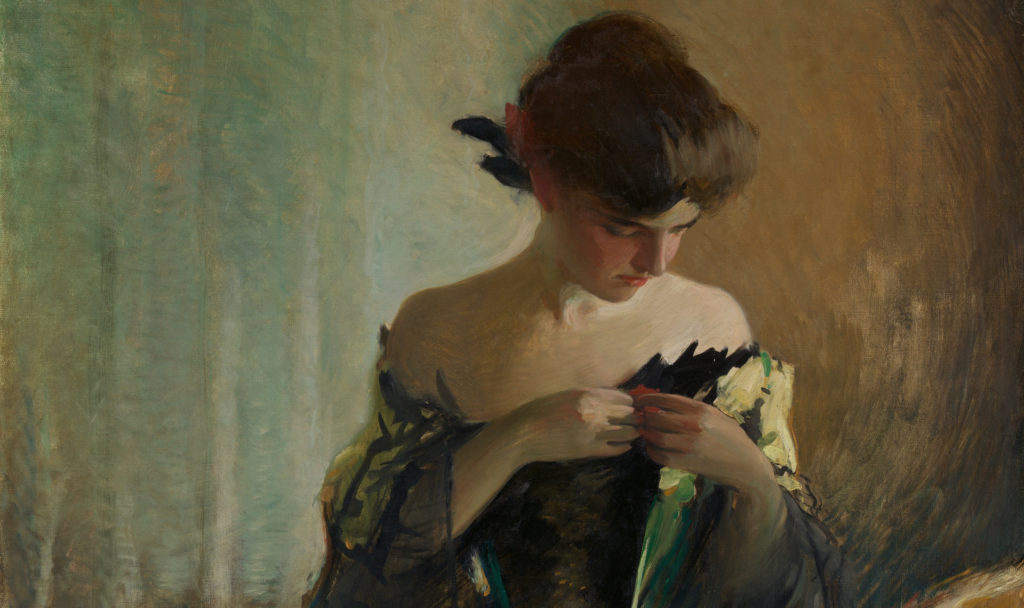 Among the many items in the glass cases of the Henry Luce Center at New York’s Metropolitan Museum of Art is a striking oil painting with the unremarkable title Study in Black and Green. It depicts a woman pinning something to the neckline of her bright emerald gown. The pose, the light, and the bold, almost vibrating brushstrokes make the whole painting at once intimate and audacious.

It’s the work of John White Alexander, one of the most celebrated painters of his day—whose name now hardly rings a bell. At his death in 1915, the prominent art critic and author Harrison S. Morris said Alexander belonged in the “Valhalla of American genius,” but thanks to 20th-century aesthetic trends that eschewed representational painting and the values of elegance and grace so prominent in Alexander’s work, the art world soon forgot him.1 A number of his paintings even were lost.

Fortunately, interest in Alexander has begun to grow in recent years, and a new biography, John White Alexander: An American Artist in the Gilded Age by Mary Anne Goley, takes an important step toward restoring Alexander to his rightful place in Valhalla.

Alexander was born in 1856 in a poor section of what would become Pittsburgh. His interest in drawing led him to become an illustrator at Harper’s, where he befriended, among others, Mark Twain—whom he would later paint, and who said at one point that he based certain passages in Huckleberry Finn on tales Alexander told him of a rafting trip he took as a teenager.

Alexander earned enough at Harper’s to travel to Europe, where he studied painting in Germany and Italy. While he was painting a canal in Venice, a man stopped to criticize his style; it was James McNeil Whistler, who would go on to exert a powerful influence on Alexander’s work, particularly his choice of color. Whistler’s impact can be seen as early as Alexander’s 1885 portrait Azalea, with its wispy yellows and greens.

But his style reached its full maturity in the early 1890s while he was in Paris, where he was swept into the milieu of elegant modernism now called La Belle Époque. In 1892, he painted Portrait Noir and Portrait Gris, which debuted the sweeping lines, elegant poses, and suffusing light that would mark his greatest work. Three years later, he unveiled Repos and Alathea, among his most famous paintings, which combined the spontaneity and grace of Gilded Age portraits with the long curving lines of French art nouveau. 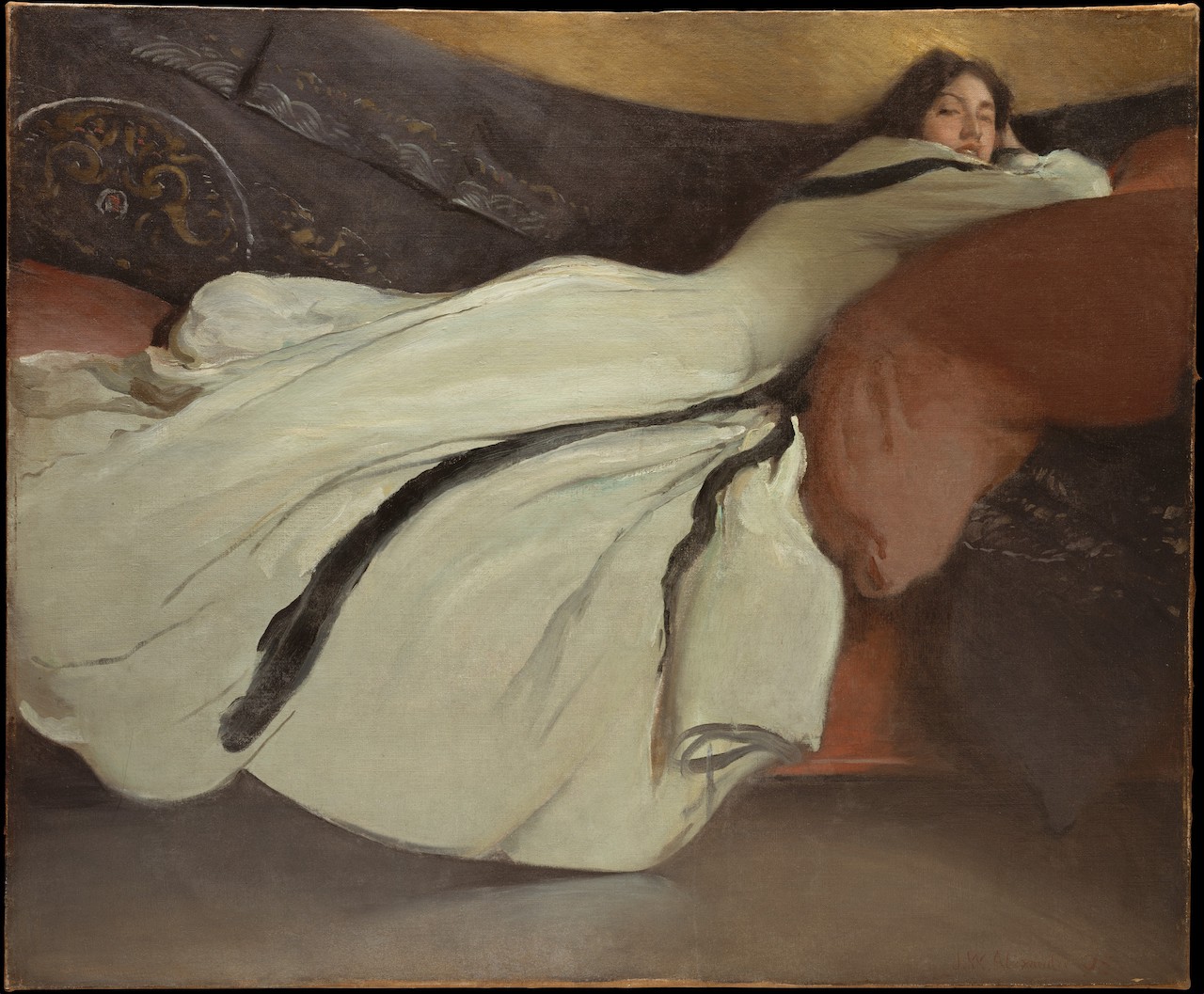 These triumphs brought Alexander not only prominent portrait commissions, but many public works projects, including murals at the Jefferson Building of the Library of Congress. His greatest work, however, always would be his figure painting, which went even further toward idealization and romanticism than even the post-Impressionist paintings of such contemporaries as John Singer Sargent. Alexander’s 1899 A Flower, for example, depicts a woman leaning over to smell some roses, her delicately posed fingers creating a visual rhyme with the slender legs of the table and the sheen of light on her skirt—all creating a sense of balance and wonder. “The sum of the parts,” writes Goley, gives the painting the “effect as if seen through a looking glass.”2

Study in Green and Black proved surprisingly controversial when it premiered in 1907. It was rumored that the model was Evelyn Nesbit Thaw, who had been branded with infamy after her husband, Henry Thaw, murdered her former lover, millionaire Stanford White, in the middle of a crowded theater at Madison Square Garden. Thaw was acquitted on grounds of temporary insanity in what was called the “Trial of the Century,” but the incident made Evelyn too controversial a figure for polite society. In fact, as Goley shows, Thaw probably was not the model in question—but Alexander cleverly refused to confirm or deny the rumors, instead benefiting from publicity. 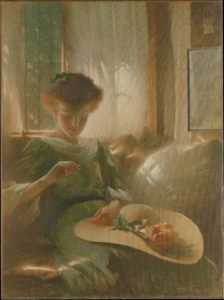 The Ring by John White Alexander

Alexander’s style continued to evolve during the remaining decade of his life, during which his art came increasingly to feature a sense of benevolent, sunlit tranquility. The gentle Sunlight (1909) and his masterpiece, The Ring (1911), are fine examples. The latter especially glows with a gentle sense of satisfaction and harmony—“a suffusion of yellow,” writes Goley, which “enhances the symbolism of the woman reflecting upon the meaning of the ring in her hand.”3

Goley’s research is a remarkable achievement given that many of Alexander’s paintings disappeared after his death, and many others are held in private collections. Not only is hers the first full biography of Alexander ever published, but it is beautifully illustrated with dozens of hard-to-find masterpieces. A true labor of love, Goley’s John White Alexander is an outstanding tribute to what she calls her “passion for an under-recognized painter”—and a promising step toward a new widespread appreciation for this forgotten genius.4

Timothy Sandefur holds the Duncan Chair in Constitutional Government at the Goldwater Institute and is a contributing editor of The Objective Standard.
View all posts by Timothy Sandefur →
How John H. Patterson Modernized Industry
TOS-Con 48-Hour Sale for Adults—Satisfaction Guaranteed!