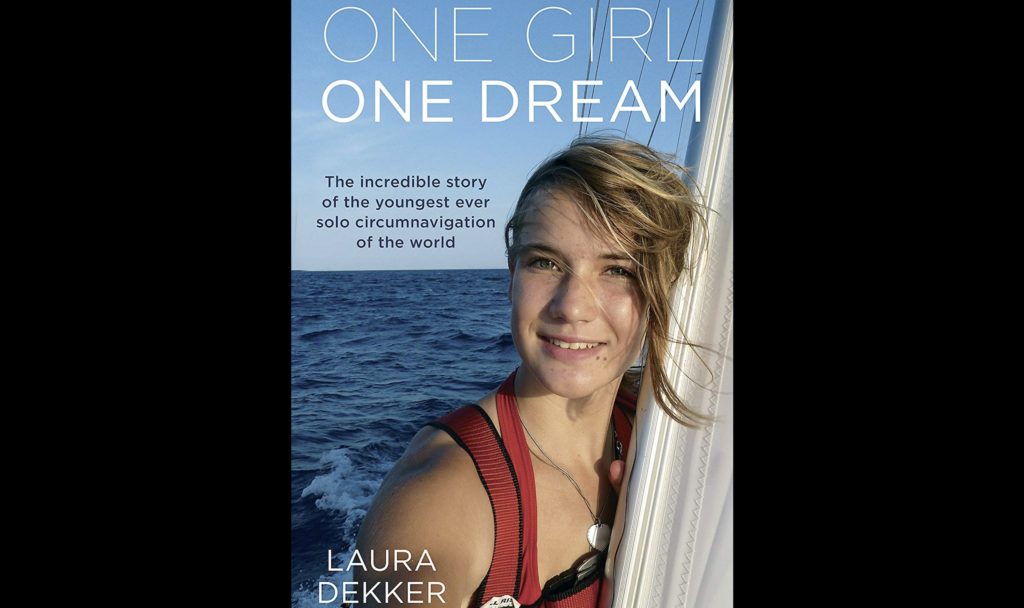 On August 21, 2010, Laura Dekker—then just fourteen years old—began an incredible journey from the Netherlands in a run-down forty-foot boat. When she sailed it into port in Simpson Bay, St. Martin, seventeen months later, she became the youngest person ever to sail around the world alone. One Girl One Dream is her fascinating and inspiring story.

The book opens strongly, detailing the immense challenges Laura’s parents faced as they battled the Dutch government over their right to raise their daughter as they saw fit. Dick Dekker, her father, is a lifelong sailor and restless nomad, and his daughter clearly takes after him. By the age of eight, Laura was already a more competent sailor than many adults around her who had been living at sea for decades—and some of them resented her for it.

Dick frequently allowed Laura to sail by herself, and although he never worried for her safety, busybody neighbors and bureaucrats soon began to accuse him of child endangerment. Tania Aebi, an accomplished sailor and author of the book’s foreword, wrote with scathing sarcasm about the people telling Laura she couldn’t follow her dream: “Everyone was doing their jobs—the older and wiser people who profess to know what’s best for a young girl, and the teenager, professing to know what was best for herself” (loc. 77).

Within the book’s first chapter, Laura’s incredibly vibrant and self-assured spirit emerges. The young sailor undertook her first long-distance solo voyage at the age of ten, when she sailed a borrowed cruiser some 113 miles around the northern edge of the Netherlands. This, she says, was when she decided to sail around the world, as her parents had. The following year, her father bought her a boat of her own on the condition that she do extra chores to pay him back, which she happily did. Two years later, at the age of thirteen, she sailed alone to England, a voyage of approximately 150 miles. Someone in the Netherlands told the local police about Laura’s solo journey, and English authorities ordered her father to pick her up and accompany her back home. This was just the beginning of the family’s conflicts with the Dutch authorities.

When Laura, by then something of a local celebrity, began to speak publicly about her desire to sail around the world by herself, the Dutch Ministry of Education, Culture, and Science saw fit to crush her dreams. Dutch law mandates that all children attend school until at least the age of sixteen, and because Laura’s adventure would necessitate her withdrawal, the country’s prime minister stated—on television—that he wouldn’t allow it. Social workers from the government’s Department of Child Protection got involved and kept Dick Dekker tied up in court for more than a year, trying over and over to have Laura placed in state custody. Each time, the judge seemed unsure of the proper course of action but eventually ruled that Dick was not endangering his daughter by letting her sail alone. After all, she had demonstrated on numerous occasions that she was an expert sailor.

Laura had hoped to begin her solo circumnavigation of the globe while she was still thirteen, but the largely negative press coverage caused several of her sponsors to withdraw their financial support, complicating matters even further. Laura refused to give up, though, even when the Dutch authorities seized her boat, making vague statements about needing it as “evidence” in a “pending investigation.”

In December 2009, Laura traveled alone to St. Martin, without her family’s knowledge, to purchase a new boat with her own savings. She faked her identity and claimed to be seventeen. She nearly succeeded in completing the purchase, but the seller of the boat alerted Dutch authorities when he saw a picture of her that they had posted in an international alert. She was detained again and sent back home.

Laura’s family—determined to support her dream—dug deep into their savings and helped her purchase another boat, which she christened Guppy. Dutch Child Protection made one final attempt to have her placed in state custody, but this time the judge firmly declared that Laura would be allowed to undertake her journey, provided she continued attending school in the form of online classes via a satellite internet connection. She agreed, and in August, at age fourteen, she finally embarked on her long-awaited adventure.

Her own words succinctly convey her emotions as she sailed southwest away from the Netherlands, bound for Portugal: “This little nation, which has caused me so much misery and hardship over the past year, disappears out of sight and I don’t look back” (loc. 300). As Aebi wrote in the foreword to One Girl One Dream, Laura was “definitely not too young to teach her elders a thing or two about optimism, perseverance, and true individuality, even as over-analysed public opinion tried to stuff her back in a box. She escaped and got out there, [and] very happily, freely, and impressively [lived] her dream” (loc. 114).

From here, most of the rest of the book details Laura’s day-to-day exploits and reads like what it is: a lightly edited diary. Her journey was largely uneventful for the first several thousand miles, and she spends many words describing relatively mundane events, such as having dinner with other sailors in port, overpaying for groceries, and struggling to find affordable SIM cards for her phone. These parts of her journey undoubtedly were exciting for her, but they don’t make for thrilling reading.

The middle portion of her trip proved to be the most challenging and dangerous. While sailing to Tahiti from the Marquesas Islands, she encountered high winds and perilous reefs, requiring her to forgo sleep for long periods as she carefully navigated her boat around hazards. In order to evade pirates in the Indian Ocean as she sailed west from Darwin, Australia, she stopped updating her blog for more than two weeks. Smartly, she realized that it was safest to avoid publicly broadcasting her position in pirate-infested waters, even though the temporary silence surely worried her readers. On several occasions throughout this part of her journey, Laura was forced to make hasty repairs to her boat in difficult conditions, many of which held only long enough for her to make it into the next port.

When Laura sailed victoriously into St. Martin on January 21, 2012, she was sixteen years and 123 days old. Hundreds of people, including her wildly elated family, gathered to greet her.

After describing her triumphant return, the book ends somewhat abruptly with some musings on her future plans:

After this I really want to carry on sailing with Guppy; through the Panama Canal for a second time and then across the beautiful Pacific with New Zealand as my destination—the country in which I want to build my life. I may travel through Australia and backpack my way around South America; or go to Iceland or Alaska. I may even sail to Antarctica to see if the infinite white gives me the same sense of peace as the ocean. Plenty of dreams to fulfill, but I know one thing for sure—and that’s that I will always continue to sail and enjoy being at one with nature.

Because English is not Laura’s first language (and because she is a sailor, not a professional writer), One Girl One Dream reads choppily in some places, but the book’s rich and inspiring drama far outweighs this minor flaw. The story of her solo circumnavigation of the world at an age when most girls barely are able to navigate their hometowns casts one extremely important idea in high relief: To an independent, creative mind that ceaselessly pursues a dream, almost anything is possible.

The story of Laura Dekker’s solo circumnavigation of the world casts one important idea in high relief: To an independent, creative mind that ceaselessly pursues a dream, almost anything is possible. Click To Tweet

Tim is the assistant editor of The Objective Standard. He also writes about personal finance, small business ownership, and video games on a freelance basis. His first novel, "The Beggar's Key," is tentatively scheduled for publication in 2020.
View all posts by Tim White →
Charles Sumner’s Principled Attack on Slavery
John Fogerty’s Disciplined Focus
Return to Top