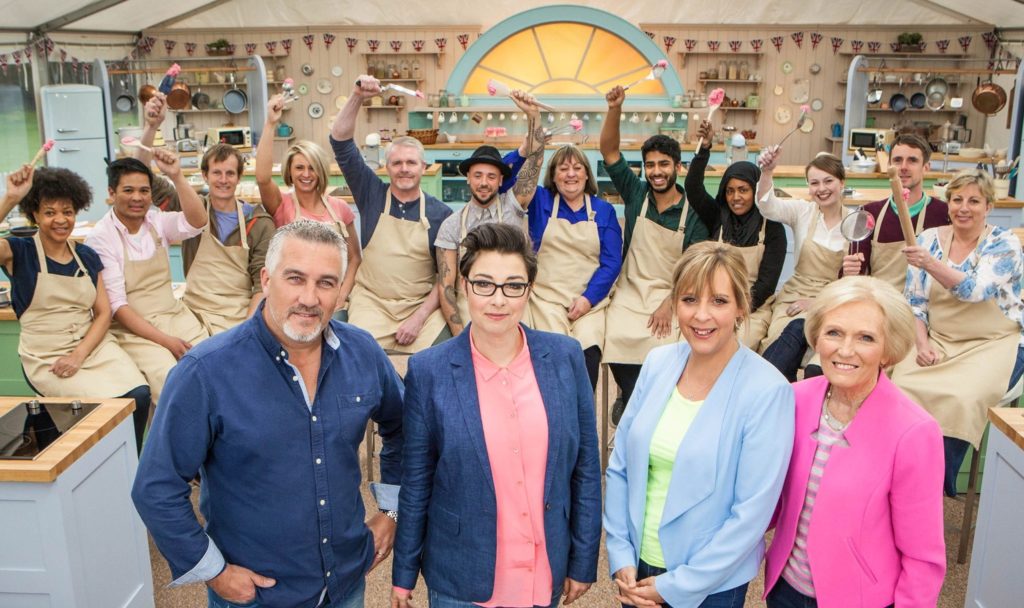 If the entertainment-oriented (as opposed to instructional) cooking and baking shows I’ve tried to watch over the years are a representative sample, then most such shows are downright depressing. Gordon Ramsay comes readily to mind; the man is a savant in the kitchen, but the constant yelling and hurling of insults on his well-known shows Kitchen Nightmares and 24 Hours to Hell and Back are extremely off-putting. Many others have a similarly negative tone.

When I discovered The Great British Baking Show on Netflix (the first season of which is the fifth season of The Great British Bake-Off in the UK), I knew by the end of the first episode that I’d found something special. The premise is simple: Thousands of amateur bakers apply for a spot on the show, and twelve are selected to compete against one another in a series of increasingly complex weekly baking challenges. Each week, one baker is eliminated until only three remain, and the winner is chosen from among them.

It’s common in other cooking and baking shows to hear words such as “cutthroat,” “vicious,” and “stone-cold” used to describe the contestants regarded as most likely to win. But on The Great British Baking Show, the “nice guys” are not portrayed as the weakest links. (Indeed, all of the season-one contestants seem to be benevolent, approachable people.) It’s not uncommon to see contestants chatting amicably, even helping one another as the clock runs down on each timed challenge.

On other cooking shows, the top contestants often speak as though winning is all that matters and that being nice to their fellow competitors runs counter to their own interests. But contestants on The Great British Baking Show generally seem to understand that there’s no inherent conflict between winning and being friendly with one’s competitors—and that their own interests are much broader and longer range than simply winning the competition at any cost. The mutually beneficial personal and professional relationships that some of the contestants form extend well beyond the show. When one of my favorite season-one bakers got married earlier this year, many of the people she competed against attended her wedding—and every one of them made her a fabulous wedding cake.

Because most of the show’s contestants are laser-focused on seeing the best baker win—even if it isn’t them—they’re able to regard one another with admiration and respect rather than envy and resentment. They value the mastery of baking, and they’re constantly trading with and learning from one another. Ayn Rand put it best when she said, “A creative man is motivated by the desire to achieve, not by the desire to beat others.” At least in season one (the only season I’ve finished watching), the contestants are consistently gracious to and objectively critical of one another. In the season-one finale, a finalist who didn’t win said of the victor, “Without a doubt, the right person won today.”

The show’s first-season judges, Paul Hollywood and Mary Berry, are just as passionate about baking as the contestants are and just as focused on rewarding mastery above all other considerations. Bakers who produce stunningly perfect confections are showered with sincere praise; even the sloppiest desserts earn criticism tempered with compassion. During the segment of each episode in which the judges must choose who to send home, they always agonize over the decision, and the baker who is cut always receives a group hug and joyful praise from everyone else.

The two cohosts, Mel Giedroyc and Sue Perkins, are energetic goofballs. They speak in ridiculous voices, make terrible (and uniquely British) puns, and run around with pastry dough on their faces (Sue puts her glasses back on over it, of course). Both are hilarious, and they regularly steal the show for a few seconds at a time. Like everyone else on the show’s first season, they bring laughter, passion, and respect to a hypercompetitive environment, and they’re wonderfully effective at lightening the mood.

All in all, The Great British Baking Show is an absolute joy to watch. (I’m already dreading the day when I finish the entire show.) If you’ve been searching for a highly entertaining, heartwarming show that demonstrates how it’s possible for people to pursue their greatest passions while having fun and respecting their competitors—even when someone has to “lose”—look no further.

If you’re searching for an entertaining, heartwarming show that demonstrates how it’s possible for people to pursue their greatest passions while having fun and respecting their competitors—even when someone has to “lose”—look no further. Click To Tweet

Tim is an assistant editor of The Objective Standard. He also writes about personal finance, small business ownership, and video games on a freelance basis and can be contacted at timwhitewriting.com. His in-progress books are "The Beggar's Key" (a novel) and “Personal Finance Made Simple: Everything Your Teachers Failed to Teach You.”
View all posts by Tim White →
Three Masters of Watercolor
The Rediscovery of America: Essays by Harry V. Jaffa on the New Birth of Politics
Return to Top