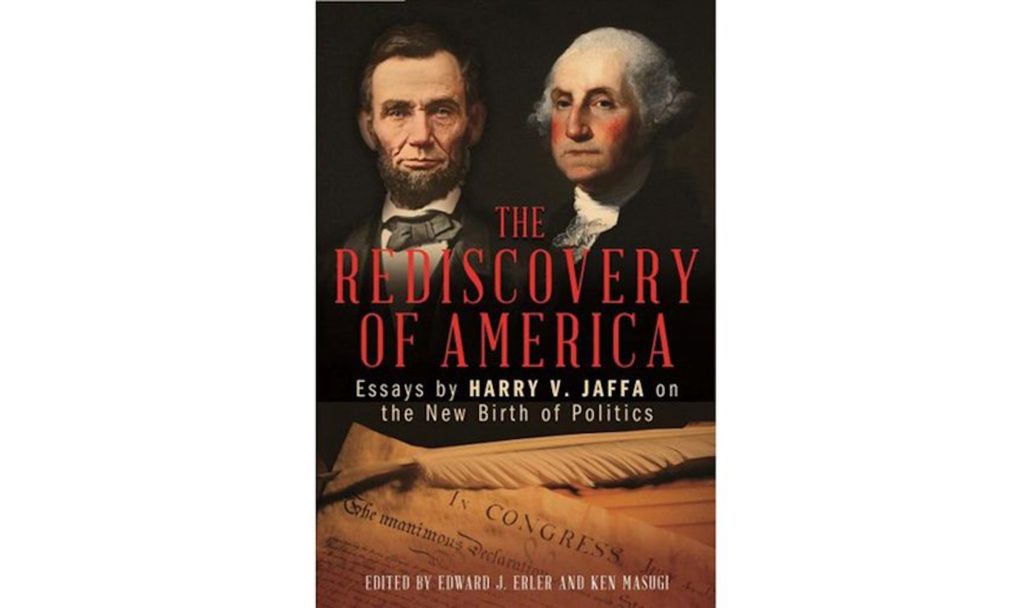 Harry Jaffa was perhaps the most philosophically astute of all American conservatives. His books, though often flawed, were studded with thought-provoking insights, and Crisis of the House Divided—his philosophical analysis of the Lincoln-Douglas debates—has become a modern classic. Many of the essays he wrote during his final two decades, however, have been unavailable until now. At last, a new book, The Rediscovery of America, gathers his often dazzling, sometimes outrageous, valedictory writings.

Jaffa called himself a “gadfly” because he criticized his fellow conservatives, especially traditionalists such as Russell Kirk and Robert Bork, who, as Jaffa proved, actually surrendered the principles they purported to defend. His attacks on those he called “false prophets of American conservatism” often were harsh, because he wisely approached philosophical disputes with grave seriousness and because he believed they had embraced the same fatal thesis that modern liberals had: “there is no objective knowledge of, or rational ground for distinguishing good and bad, right and wrong, just and unjust” (101). This obliterated the only ground—reason—from which justice or liberty could be defended.

Thus when Chief Justice William Rehnquist remarked that the U.S. Constitution’s “safeguards for individual liberty” have only “a generalized moral rightness”—and they have this rightness not “because of any intrinsic worth . . . but instead simply because they have been incorporated in a constitution by the people”—Jaffa was mortified. “Rehnquist will not say that [tyranny] is unreasonable and wrong because unreasonable,” he wrote.

Having embraced what Jaffa called “the obscurantism of historicism, relativism, and nihilism,” conservatives such as Rehnquist were, despite their reputation for moralizing, incapable of defending morality (266). They, like their opponents, abandoned reason and, therefore, could appeal only to “unfettered will” as “the ground . . . of all morality,” a proposition “of which totalitarian regimes are the natural and culminating manifestations” (103). It was “impossible,” Jaffa held, “to defend ‘our original principles’ except by defending them against this moral relativism” (254).

Therefore, he sought to defend the American constitutional order as “the best regime” in terms of ancient as well as modern political thought—on the grounds that it was based on “that objective order from which we, like Aristotle and the Founding Fathers, may take our moral and political bearings” (121, 254). His conservative opponents argued that this was impossible, given what they considered a fundamental conflict between the political theories of Aristotle and those of America’s philosophical “founding father,” John Locke. The former, they argued, was essentially authoritarian, whereas the latter was individualistic. But Jaffa argued that if Aristotle had lived in the monotheistic world Locke inhabited, he, too, would have embraced the Englishman’s political views.

Citizens in polytheistic Greece considered themselves servants of the gods of their specific cities, he explained, and therefore took for granted that city authorities should control their moral lives. Monotheism, however, gave birth to the idea that “each individual has a relationship with God that is prior, both logically and ontologically, to his membership in his political community.” In light of that principle, the authoritarianism that the ancient Greeks accepted would “serve only tyranny.” And because “the very purpose of law, according to Aristotle, is to prevent tyranny,” Jaffa concluded that a modern-day Aristotle would embrace the Lockean principle of individual rights (8).

Jaffa’s effort to defend reason and freedom, however, was handicapped by his defense of religion (which he vainly tried to portray as rational) and his homophobia—a word sometimes abused but appropriate for Jaffa, whose ferocity toward those he insisted on calling “sodomites” was grounded in an irrational fear that homosexuality represented the “repudiation” of “all morality” (50). This rested on two errors: First, he equivocated over the meaning of the word “natural” in “natural law,” concluding that because homosexuality cannot result in childbirth, it must be “unnatural.” Some students pointed out that even if one accepts this fallacious view, it still doesn’t follow that the state can proscribe it. But Jaffa rejected that idea as well on the premise that one cannot consent to an “unnatural” act. These misconceptions led him to make reprehensible arguments that will forever stain his reputation. Rediscovery omits the repulsive article in which he analogized homosexuality to the serial murders of Ted Bundy, but it includes similar instances.2

Despite these flaws, Rediscovery often is enlightening and instructive. Jaffa’s essays display an intellectual depth lamentably absent from today’s conservatism. And for all of his errors, his insistence that the truths of the Declaration are not historical artifacts but timeless principles worthy of defending will make his best work last forever.

For all of his errors, Jaffa's insistence that the truths of the Declaration are not historical artifacts but timeless principles worthy of defending will make his best work last forever. Click To Tweet

Timothy Sandefur holds the Duncan Chair in Constitutional Government at the Goldwater Institute and is a contributing editor of The Objective Standard.
View all posts by Timothy Sandefur →
The Great British Baking Show’s Wonderful Sense of Life
Life-Enhancing Ideas from Alex Epstein’s Human Flourishing Project