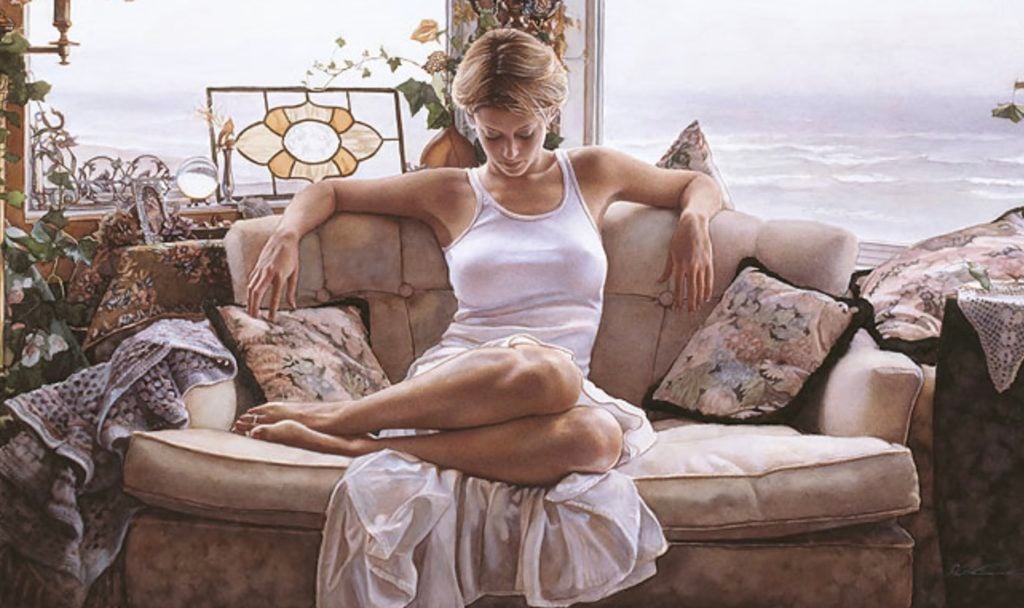 Watercolor may be the most demanding of all visual arts. It leaves little room for mistakes and requires a keen eye for color and an exceptional discipline in shading. But it also is uniquely rewarding because, being more transparent than oil paint, watercolor can convey more gentle, lighthearted effects. This gives the medium an extemporaneous feeling that, like a musical impromptu, belies the concentration and practice it requires.

That’s what makes the work of the photorealist watercolorists so remarkable. In the past fifty years, these artists—most notably Carolyn Brady, Paul Jackson, and Steve Hanks—have introduced a new dimension into watercolor, demonstrating that what some think is an art of mere sketches and impressions is capable of the most staggering emotional impact.

Brady began attracting attention in the 1970s with still lifes of flowers that stunned audiences with their realism and vivid palette. Full of virtuoso effects such as refractions in wavy windowpanes and twisting flower stems, her paintings drew viewers into a world of light and energy. Some, such as “September Lunch: The Day’s Mail,” seemed to exist simply for the sake of demonstrating her breathtaking technical skills. But her best work depicted slightly simpler scenes, such as “Emerald Light (Black Desk for Zola),” a calm meditation on the beauty of light; or “Amaryllis: A Study in Red,” which seems alive with appreciation for warmth. And, challenging the stereotype of watercolor as a genteel art form for hobbyists, Brady’s paintings often were enormous. “The Day’s Mail,” for example, is some fifteen square feet. Before her death in 2005 at the age of sixty-seven, Brady had helped revive interest in watercolor and convince critics and fellow artists of its profound artistic potential. 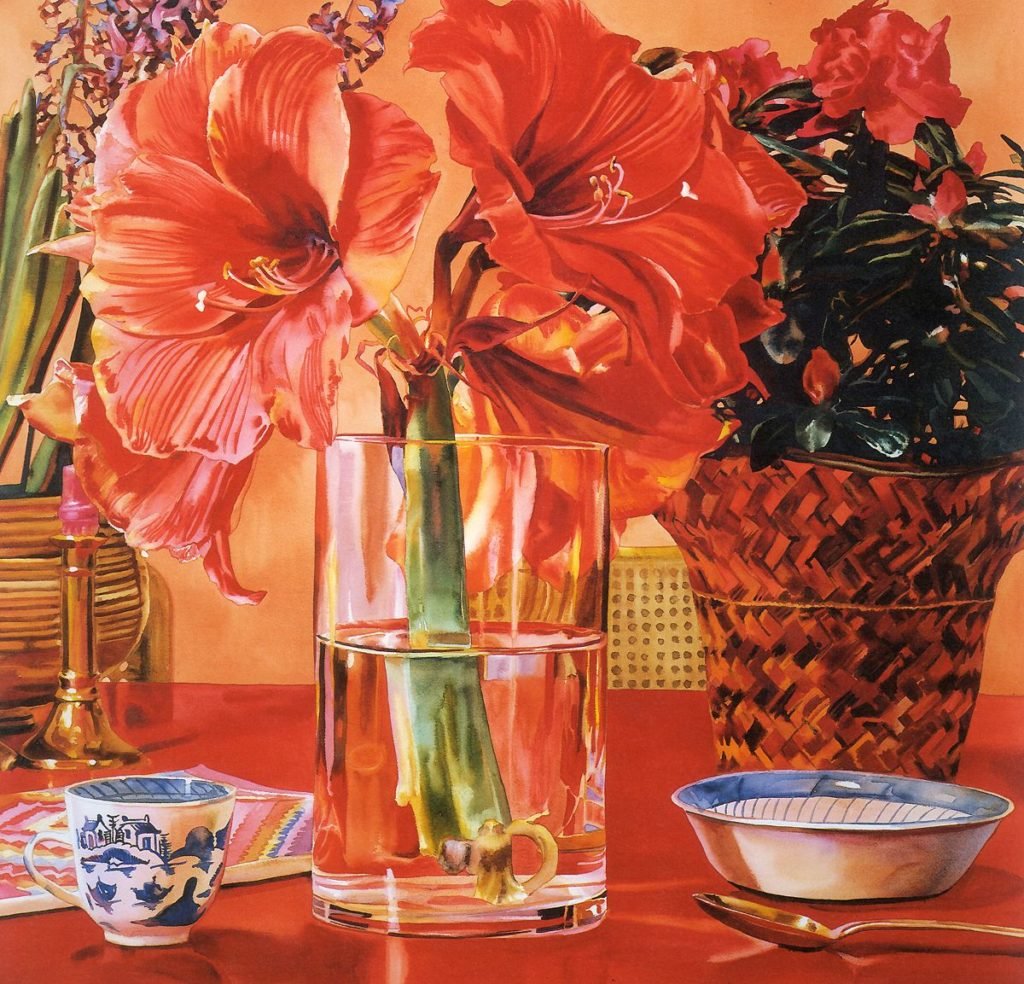 Amaryllis: A Study in Red by Carolyn Brady

Whereas Brady focused her skills on still life, Missouri painter Paul Jackson has brought his astonishing abilities to bear on architectural, figural, and animal painting. Such works as “Luce di Firenze,” “Floating Palace,” and “Glimpse at the Gate” feature an intricacy of detail that would be astounding in any medium, but the fact that they’re watercolors is almost impossible to believe. Jackson’s realism, however, doesn’t descend into mere cataloging. His paintings are witty—as in “The Cardinal,” which puns on the ecclesiastical term to appreciate the beauty of a bird—or magical, as in “Detour,” in which the liveliness of a rain-swept New York street is highlighted by a pelican absurdly hiding in plain sight. Jackson enjoys light effects, and his many paintings of bottles or the reflections on musical instruments are bravura demonstrations of skill that also convey a sense of wonder in sensual experience. Jackson’s work gives the impression of an ingenious child enraptured by a world of intricate marvels. 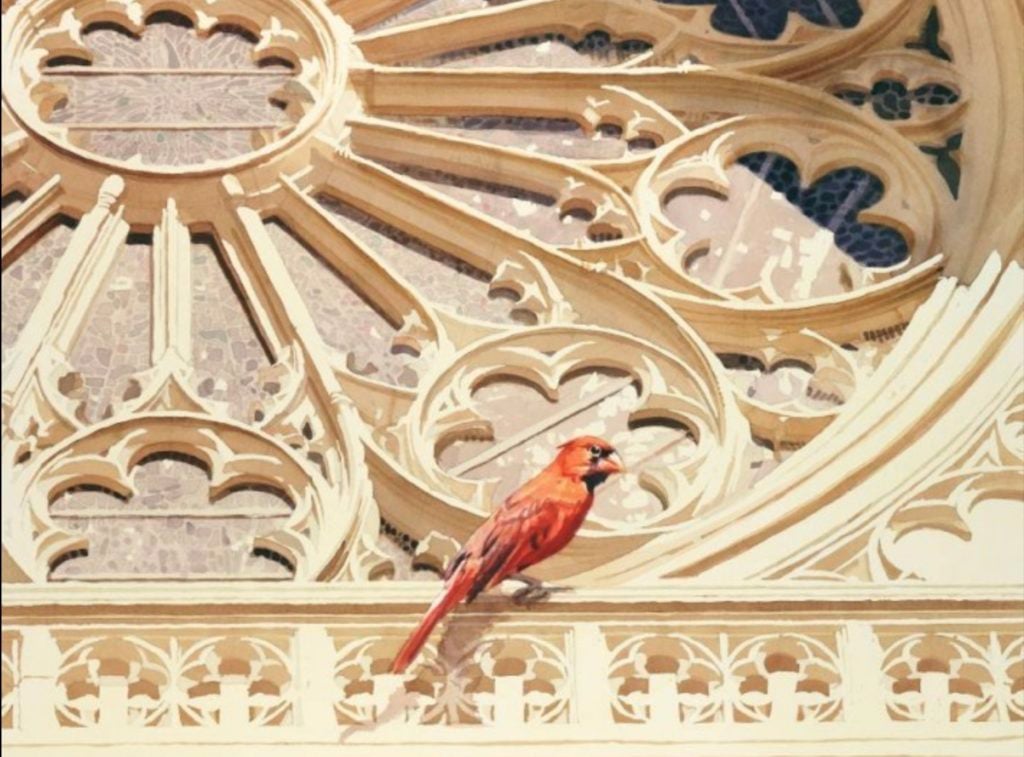 The Cardinal by Paul Jackson

But probably the greatest of the photorealist watercolorists is the late Steve Hanks. A child prodigy who began as a poster artist, Hanks switched to figure painting after graduating from art school and took up watercolor due to his allergy to oil paint. By the 1980s, he was producing stunningly detailed paintings that expressed a sense of serenity and gratitude for life—what he called “emotional realism.” His youthful work was rooted in anguish and tension, but marriage and fatherhood changed his outlook. “When [my wife] was pregnant she was the most beautiful woman I had ever seen,” he recalled. “I had never experienced the birth of a child, and it had a tremendous effect on me.”1

Like Brady and Jackson, Hanks was a painter of mind-boggling skill, and he loved hard challenges such as shadows on rumpled quilts and capturing the expressions on babies’ faces (as in his double-feature “All in a Row” and “All Gone Awry”). But he also harnessed these skills to convey a distinct sense of life. His finest achievements were his female figure paintings, which strike the perfect notes of eroticism and calm. Consider the solemn admiration of “After the Shower,” or “When Her Blue Eyes Close,” or “Santa Fe Sun”—a tour de force of technical mastery (the reflections in the windowpanes are ingenious) that expresses the perfect tone of tranquility. 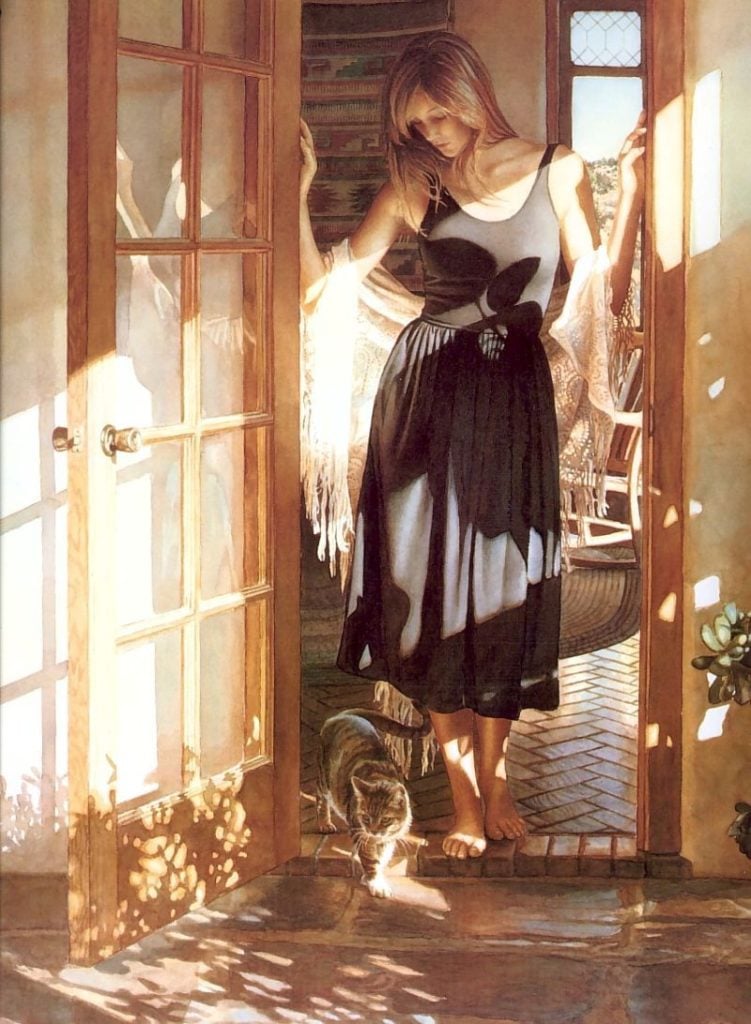 “I discovered that it was easier for me to express my emotions through the female form,” he explained. “After a while I was not, in my mind, painting women at all, but simply expressing emotions.”2 One need merely glance at “Reflecting” or “To Search Within” or “Carrying the Weight of the World” to appreciate that. Hanks, who died in 2015, had a clear mission. He wanted to “put positive images out into the world,” he said, and to “bring comfort, pleasure and insight into people’s lives.”3

In her poem “April Aubade,” Sylvia Plath described the way “this world of watercolor mood” can make us feel “that somehow we are younger than we were.”4 The vibrant and delightful visions of Carolyn Brady, Paul Jackson, and Steve Hanks certainly accomplish that.

Carolyn Brady, Paul Jackson, and Steve Hanks introduced a new dimension into watercolor, demonstrating that what some think is an art of mere sketches and impressions is capable of the most staggering emotional impact. Click To Tweet