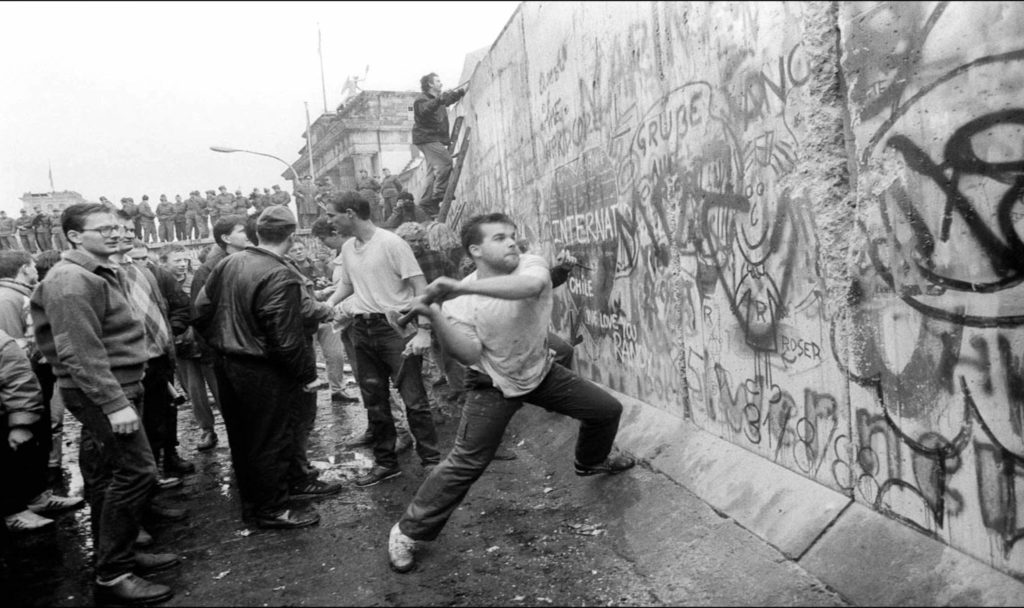 When Winston Churchill warned in 1946 that an “Iron Curtain” had fallen across Europe, he did not know his words would become almost literally true fifteen years later. That was when construction began on the infamous Berlin Wall—actually a collection of concrete barriers, barbed-wire fences, mines, guard towers, and trenches that divided not only Berlin but all of Europe into the communist East and free West. The Wall stood as a symbol of communist tyranny from its 1961 completion until a series of protests finally led to its destruction thirty years ago this autumn.

The Wall was the brainchild of Nikita Khrushchev, dictator of the Union of Soviet Socialist Republics, who sought to stem the flow of refugees escaping the oppressive, impoverished communist world. According to socialist doctrine, citizens owed their lives and skills to the collective, and shirking one’s duty by emigrating was not only selfish, but a criminal theft of state property. East German officials even gave it a name: “Republikflucht”—literally “flight from the Republic.”

Illegal border crossings were risky, and hundreds of people were killed in the attempt. Thousands succeeded, though, some in daring and imaginative ways. In 1963, an East German soldier tried to smash through in a stolen tank; it got stuck, and he was shot before Westerners managed to pull him over. Fortunately, he survived. A year later, fifty-seven people escaped through a tunnel that took five months to dig. Communist forces closed it only two days after it was finished. In 1979, two families fashioned a hot air balloon out of bed linen and flew over the wall—an incident dramatized in the stirring film Night Crossing.

Probably the most astounding escapes were those of the Bethke family. In 1975, twenty-one-year-old Ingo Bethke floated across the Elbe River on an inflatable air mattress. Eight years later, his brother Holger used a bow and arrow to shoot a cable to a building on the western side and slid across on a pulley into Ingo’s waiting arms. Then in 1989, the pair disguised themselves in uniforms and flew to East Berlin in two ultralight planes they’d painted with Soviet-style red stars. They landed, picked up their third brother, Egbert, and flew back while stunned military officers tried to decide whether to shoot them down.1

The Wall’s destruction came about through acts of bravery no less dramatic. When Soviet Premier Mikhail Gorbachev initiated the slightly more lenient policies known as perestroika, dissidents throughout Soviet-dominated Europe began pushing for national independence and greater liberalization—demands Gorbachev’s government found increasingly hard to resist. In the summer of 1989, the leaders of Hungary deactivated the electrified fence between it and Austria, enabling anyone who could get to Hungary to escape. Czechoslovakia followed suit, and more than one hundred thousand East Germans soon flooded the two countries. Communist officials told them they could leave, but anything they left behind would be confiscated by the state. So they defiantly nailed their house and car keys to trees, or hung them in necklaces around the necks of statues—and went.2

Thousands who couldn’t make it to the Austrian border climbed the fences of West German embassies in Budapest and Prague, seeking asylum. There they camped for weeks, while in Leipzig and other cities, massive illegal protests clogged the boulevards. Secret police tried beating and arresting the demonstrators, but to no avail.

At last, on September 10, 1989, the refugees at the embassies were told they could leave—or rather, that the East German government was “expelling” them. They would have to surrender their passports before being “sent” west on sealed trains. This attempt at humiliation backfired as twelve thousand emigrants ran to the trains and threw their hated passports out the windows.3 Crowds gathered by the tracks to cheer them on—and as soon as they were gone, thousands more climbed into the embassy gardens.

East German authorities gave up on November 9 and opened the Wall’s checkpoints. Almost immediately, people on both sides began chipping off pieces of the concrete barrier to celebrate. The last of it was demolished in 1992. Today, writes journalist Frederick Taylor, “nothing can beat the pleasure of being able to stroll through the Brandenburg Gate,” knowing that “the greatest danger you run when taking these few unhurried paces is of being knocked into by an over-enthusiastic bicycle courier, not cut in half by a burst of automatic fire.”4

Three decades on, as polls report the increasing popularity of socialism among young Americans—many of them born after 1989—it’s worth pausing to remember the massive evil of the Berlin Wall and the bravery it took to bring it down.

Three decades after the fall of the Berlin Wall, as polls report the increasing popularity of socialism among young Americans, it’s worth pausing to remember the massive evil it embodied and the bravery that brought it down. Click To Tweet

Timothy Sandefur holds the Duncan Chair in Constitutional Government at the Goldwater Institute and is a contributing editor of The Objective Standard.
View all posts by Timothy Sandefur →
Greta Thunberg Should Be Angry—and So Should You
Socialism vs. Capitalism: Richard Salsman Debates John Komlos