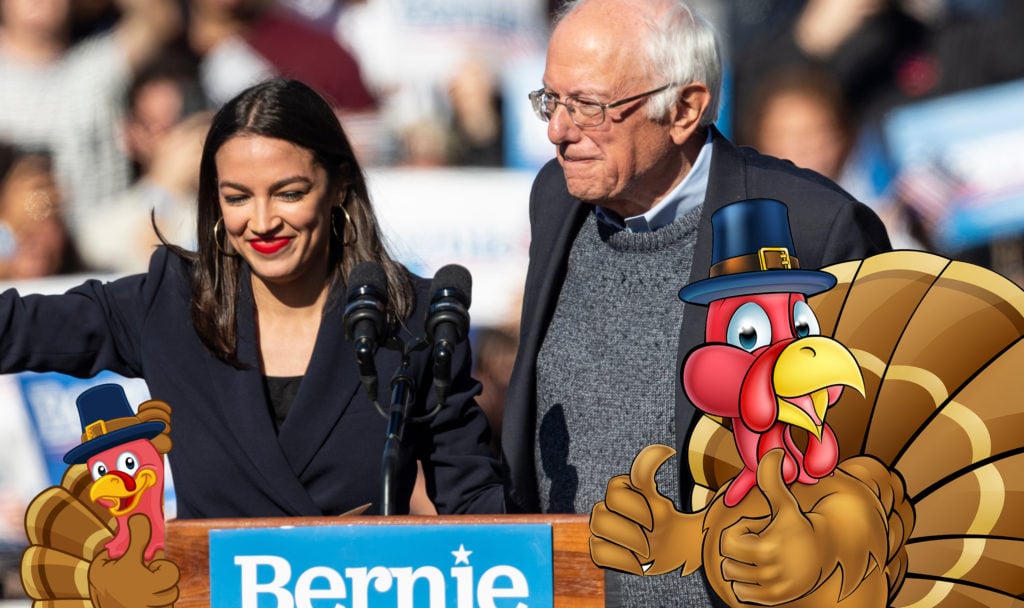 Editor’s note: This article is Real Fake News, a means of preserving the sanity of good folk by making fun of the absurd aspects of today’s culture and politics. Enjoy—and share it with friends you’d like to keep sane, too!

As Americans were stocking up on french-fried onions and cranberry sauce on Monday, Senator Bernie Sanders and Representative Alexandria Ocasio-Cortez announced the latest addition to the Green New Deal: a plan to end Thanksgiving. “This week,” said Ocasio-Cortez, “we’ve learned that in the Bronx alone, as many as twenty-four hundred residents may go without adequate food on Thanksgiving while the rich will consume thousands of excess calories. This legislation is about helping the frontline families most impacted by our nation’s nutrition inequality.”

“Thanksgiving is a product of the forces of oligarchy and authoritarianism,” said Sanders. “It instills in people the idea that if you work hard you should be able to enjoy the fruits of plenty without feeling guilty that others have less . . . completely unAmerican.”

The plan would phase out Thanksgiving by the year 2025. In the years prior, turkey producers would face more strict emissions standards that would ratchet up each year. Ocasio-Cortez explained, “Turkey’s total greenhouse gas emissions are up 5 percent since 2016. That’s nearly five hundred million tons of CO2 caused by these ugly birds.” One of the representative’s aides clarified that these are the statistics for the Middle Eastern country of Turkey but said that numbers for the poultry market are only slightly less. “We must reject the paradigm that ending Thanksgiving must come at the cost of our jobs or our well-being,” Ocasio-Cortez added. “That’s not true. Ending Thanksgiving will lower obesity, inequality, and greenhouse gas emissions. Plus, no one will have to work on Thanksgiving anymore.”

According to statistics from the Democratic Socialists of America, the very rich eat, on average, one thousand more calories per day than the poorest Americans. However, on Thanksgiving Day, that number quadruples. Ocasio-Cortez said, “We shouldn’t be selfishly celebrating our community’s excess production when others are starving in our nation’s food deserts. The disparity between rich calories and poor calories is growing at an alarming rate.”

Aiming to reduce inequality between now and 2025, the plan would leverage the high concentration of popular fast-food chains within the nation’s food deserts, providing subsidies to those who offer Thanksgiving-related products, including turkey doughnuts, green bean casserole burritos, and “cranberry milkshakes” (a popular cocktail Ocasio-Cortez developed while bartending).

Shortly after the announcement, President Donald Trump tweeted, “Bad plan. VERY bad plan. A turkey is a delicious bird. One of the best. Everybody agrees. Excellent food bird. Magnificent animal. And the only animal that has a wishbone in its body. I love the wishbone. Tremendous amount of good fortune in that bone.”

A whistleblower has come forward, claiming to have overheard Trump and his personal attorney, Rudy Giuliani, discussing the legality of revoking President Obama’s pardon of Tater, the 2016 National Thanksgiving turkey now living at “Gobbler’s Rest” in Blacksburg, Virginia.

Speaker Nancy Pelosi responded to the news, calling for an immediate end to the annual turkey pardoning ceremony, saying that it “normalizes the abuse of executive action to give and take away the liberty of minority livestock. No fowl is illegal!”

As Americans stock up on french-fried onions and cranberry sauce, @SenSanders and @AOC announce the latest addition to the Green New Deal: a plan to end Thanksgiving. Click To Tweet

Jon Hersey is the associate editor of The Objective Standard. His work focuses on intellectual history, specifically, the ideas on which freedom and flourishing depend. He has published in-depth articles on John Locke, Thomas Jefferson, Benjamin Franklin, John Stark, William Wilberforce, Rosa Parks, and more.
View all posts by Jon Hersey →

Keith Sanders is an accountant and singer/songwriter living in New England.
View all posts by Keith Sanders →
Peaceful Death Threats by Bosch Fawstin
The Bravery of Hong Kong’s Freedom Fighters
Return to Top