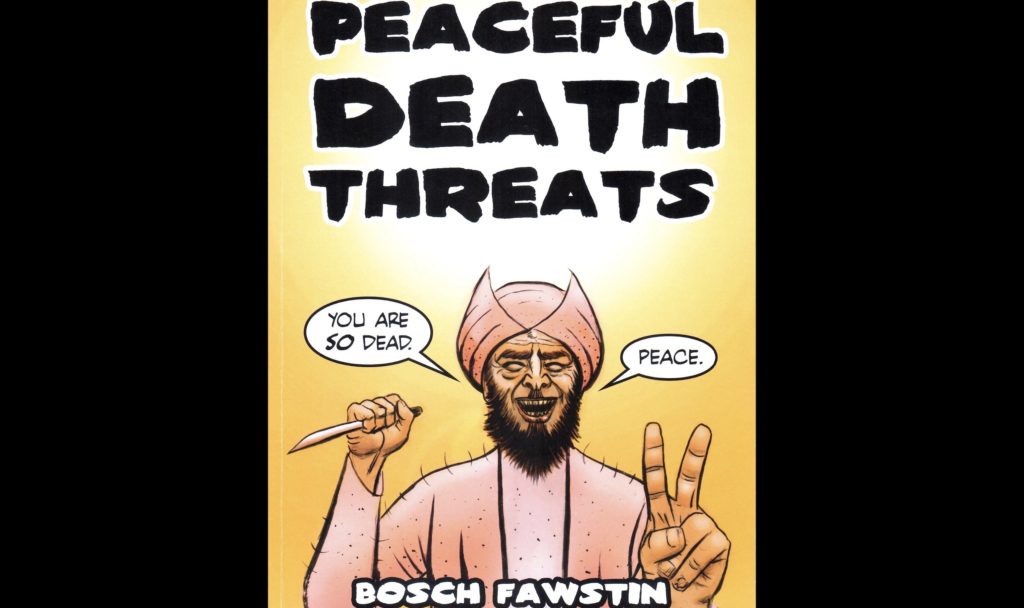 Five years before the 2015 Charlie Hebdo massacre, there was Molly Norris. In 2010, Norris sought to support artists who were threatened with violence for creating representations of the Islamic “prophet” Muhammad. Drawing for a Seattle alternative newspaper, Norris created a cartoon calling for an “Everybody Draw Muhammad Day.”1

As Norris’s campaign went viral, Yemeni American cleric Anwar al-Awlaki put a hit (aka “fatwa”) on Norris. Under threat, Norris quickly reversed course and disavowed her campaign, claiming that she had no desire to “insult” Muslims.2 On the advice of the FBI, Norris changed her name and went into hiding, where she remains to this day.

“You may have noticed that Molly Norris’ [sic] comic is not in the paper this week,” wrote one of Norris’s newspaper colleagues in 2010.3 “That’s because there is no more Molly.”4

No more Molly. And who could blame her for preserving her life at a time when the very people who are supposed to protect it are instead appeasing evil?

But imagine for a moment if artists and other creators refused to surrender their freedom of speech. Artist Bosch Fawstin has.

Fawstin is an Eisner Award-nominated cartoonist and ex-Muslim. Raised a Muslim, he now utterly rejects Islam, arguing that the creed represents nothing more than brute force and tyranny.

In May 2015, two ISIL-inspired Muslim terrorists attempted to murder Fawstin and other critics of Islam. A participant at anti-Islam firebrand Pamela Geller’s “First Annual Muhammad Art Exhibit and Contest” in Garland, Texas, Fawstin was present to receive a $10,000 prize for his best-in-show pen-and-ink drawing of Muhammad. As the evening wound down, two gunmen opened fire on police guarding the event. An off-duty officer fought back and successfully killed both gunmen.

In the aftermath of the attack, the public response to the event and Fawstin was mixed. Among politicians and the media, it was worse than mixed. Donald Trump attacked the event as a purposeless taunt, and Fox commentator Greta Van Susteren criticized the organizers of the contest for putting police lives at risk.

Fawstin became the target of thousands of death threats made by Muslims enraged by his drawings of Muhammad and apparently disappointed that he wasn’t slain in the Garland attack. The Muslim threats against Fawstin only trebled three years later in 2018 when Dutch politician Geert Wilders invited Fawstin to the Netherlands to judge a new Muhammad cartoon contest. The Pakistani government responded by blocking Pakistani access to Fawstin’s social media accounts under the aegis of an anti-blasphemy law that imposes the death penalty for speech that “defiles the sacred name of the Holy Prophet Muhammad.”5 Presumably, were Fawstin ever to enter Pakistan, he could count on his state-sanctioned murder.

Undeterred, Fawstin sifted through the numerous threats he received and compiled them into a (as of now) two-volume series titled Peaceful Death Threats. The series—a compilation of Fawstin’s various Muhammad drawings alongside image after image of the threats he received against his life—serves as a trenchant reminder of the violent nature of Islam. Some of these threats, which he received primarily on social media, graphically depict Fawstin’s murder and the murder of his family. Others express admiration for Hitler and his slaughter of Jews. The result is a book that the U.S. president and every member of Congress ought to read. In fact, it’s one that belongs on every bookshelf in the West.

Why? Because the number and nature of the threats made against Fawstin give lie to the claims that Islam is “a religion of peace” and that jihad against cartoonists is the product of only a small fringe sect of Muslims. The juxtaposition of the threat makers’ benign social media profile pictures against the cruelty and malice of their words is especially jarring. Fawstin includes few wild-eyed ISIL soldiers; most are seemingly normal people—doctors, engineers, students, one individual who worked for Facebook—whose words nevertheless drip with venom against Fawstin’s right to live and speak.

And it is precisely Fawstin’s desire to live and speak that animates his books.

“I want to live as a free man in a free country where I can draw whatever I want,” says Fawstin. “Look at the hellholes where you can’t draw Muhammad. Every time I draw Muhammad—and I’ve now drawn him over three hundred times—it’s me defying the enemy, along with [their] supporters,” which include both “progressives” and conservatives whose appeasement amounts to enabling murder.6

“I want my world to never become that world,” says Fawstin. “And I achieve that one cartoon at a time.”

Some Islam sympathizers argue that not every Muslim would attempt to murder Fawstin for his apostasy or his drawing of Muhammad. Even those who made threats against Fawstin’s life are unlikely ever to act on their threats. As Fawstin himself puts it, “most Muslims are morally better than the prophet they claim to follow.”

But Fawstin makes a larger point. He observes that nothing in Islam qua Islam protects him as an Islamic apostate and blasphemer. He argues that the Koran itself calls for loyal Muslims to kill him. He recognizes that when Islamic scripture is taken seriously and upheld, murder and mayhem quickly follow. Everyday life for Fawstin is a game of what he terms “Muslim roulette,” a game of never knowing if a person he encounters will attempt to murder him for daring to draw a cartoon.

Yet if Fawstin’s personal history and Peaceful Death Threats are any proof, then he won’t back down.

He says, “As it is, the enemy has very few of us to worry about, which makes us easier for the enemy to pick off.” However, he adds:

If the West acted as it ought to have and defended free speech, and widely published the Danish Muhammad cartoons, and if cartoonists, particularly prominent ones, drew Muhammad, and if our governments spoke in defense of free speech, and against its enemies, maybe those at Charlie Hebdo wouldn’t have been massacred.7

As long as the creators and intellectuals of the West fail to defend free speech on moral grounds (however “offensive” the speech may be to the sensibilities of some) and as long as Western governments abdicate their responsibility to protect the innocent from threats of violence and death, we can count on enemies, whatever their ideology, to keep silencing those who dare to speak.

Considering its context, Fawstin’s Peaceful Death Threats represents a bold act of continued defiance on the part of one courageous man—a man standing firm against both Islamic brutality and the tepid indifference of those who fail to properly defend free speech.

Ex-Muslim Bosch Fawstin has received thousands of death threats from Muslims enraged by his drawings of Muhammad, and he’s collected them in a series that belies the idea that Islam is “a religion of peace.” Click To Tweet

Nicholas Provenzo is an attorney in private practice in Virginia. His writing has appeared in USA Today, The Washington Post, The Wall Street Journal, The Atlanta Journal Constitution, and The Washington Times. He has appeared on national TV and syndicated talk radio on shows such as ABC’s Politically Incorrect with Bill Mahr, The Laura Ingram Show, and The Mary Matlin Show.
View all posts by Nicholas Provenzo →
Star Wars Jedi: Fallen Order
Bernie Sanders and AOC Release Plan to End Thanksgiving