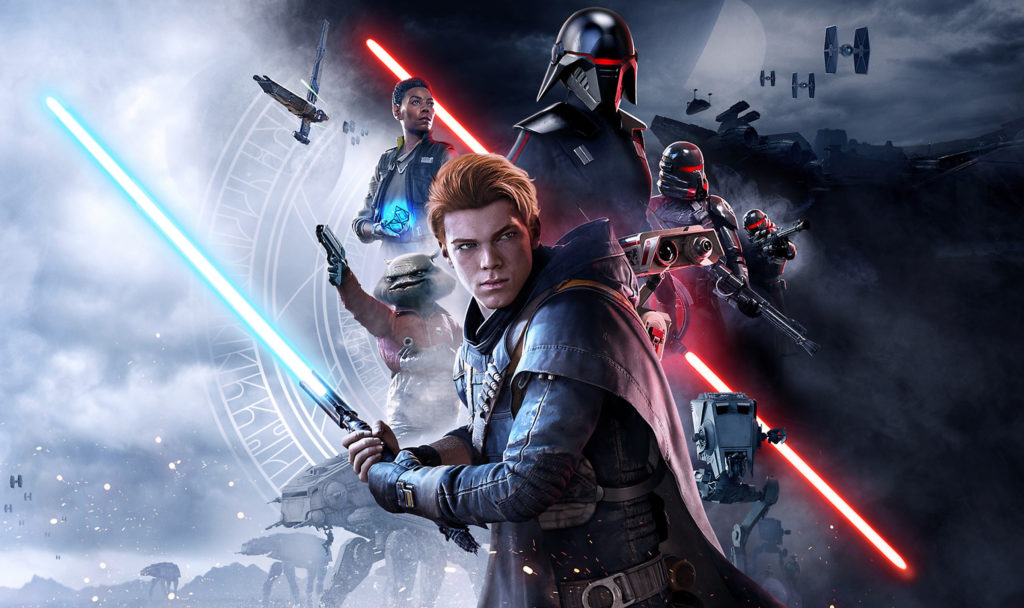 I consider myself a middle-tier Star Wars fan. The franchise has spawned a staggering number of books, movies, TV shows, comic books, and video games. I haven’t consumed anywhere near all of that content, but I’ve experienced a decent chunk of it, and Star Wars Jedi: Fallen Order is some of the best. It’s an admirable (if somewhat predictable) work of fiction that manages largely to escape the quagmire of moral relativism that ensnares and drowns much of the Star Wars universe.

Players take control of Cal Kestis, a masterless Padawan in his mid-twenties who has been in hiding since the execution of Order 66, which resulted in the deaths of almost every known Jedi. (The game takes place in 14 BBY, fourteen years before Star Wars: A New Hope). The Empire’s purge of Jedi is ongoing, and at the game’s outset, Cal is posing as a salvage worker, concealing his knowledge of the Force from those around him.

When his coworker and friend nearly dies in an accident, Cal uses the Force to save him, which alerts nearby Imperial Inquisitors to his presence. A masked Sith, initially known only as the Second Sister, descends on Cal and kills the friend he just saved. Cal reveals himself as a Jedi and challenges her but is completely outmatched. An ex-Jedi named Cere intervenes and rescues Cal at the last minute, and it turns out that she’s been looking for him for quite some time.

After a thirty-minute tutorial mission, Cal and Cere travel to the planet Bogano, and Cere reveals her plan: A now-deceased Jedi has hidden a holocron there, one that contains a long list of Force-sensitive children. Cere wants to recruit and train those children to rebuild the Jedi Order as a means of resisting the Empire’s brutal totalitarian rule. Needless to say, if the Empire finds the list first, the children and their families will suffer horrendously—and the Jedi likely will die out forever.

Throughout the game’s fifteen- to thirty-hour campaign, players guide Cal along his path to becoming a full-fledged Jedi Knight and search five planets for the key to unlock the holocron. In stark contrast to Starkiller from The Force Unleashed, Cal is not a Force-wielding demigod who can pull entire ships out of the sky. In fact, players only gain access to three distinct Force powers, and although that might feel limiting at first, with practice it’s possible to employ and combine them in a variety of creative ways. Developer Respawn has done an admirable job of conveying that Cal is only a fledgling Jedi without making players feel as though he’s weak.

Fallen Order’s story is competently written and showcases a generally positive sense of life, but its characters and their personal journeys are where the game really shines. As you might expect, both Cal and Cere are ideologically conflicted and unsure of themselves at the beginning of the game, but their character arcs are more believable and more inspiring than is often the case in Star Wars.

In several respects, most Star Wars media is philosophically problematic, but, for the most part, Fallen Order handles these issues well. For example, elsewhere in the Star Wars universe, Jedi usually are portrayed as reluctant to kill, even when no moral alternative exists. This indecision has caused serious problems for Jedi, such as when Obi-Wan Kenobi failed to finish off Anakin Skywalker in Revenge of the Sith and thus enabled the spawning of Darth Vader. Cal’s attitude toward using lethal force is a breath of fresh air: He won’t kill anyone if he doesn’t have to, but if lethal force is the only moral option, he’ll use it—and he won’t feel bad about it.

Historically, the series’ presentation of the nature of the Force has been problematic. The dark side of the Force usually is portrayed as more powerful than the light side in terms of its destructive capacity, which supposedly makes it inherently corrupting. After a lifetime of just and moral behavior, many Jedi who tapped into the dark side only once (and usually in truly dire circumstances) nonetheless became corrupted by it, which makes for a recurring plot element that reeks of determinism. (Consider the story of Quinlan Vos’s fall to the dark side, which makes no sense at all.)

In a welcome departure from the Star Wars status quo, Fallen Order generally acknowledges the dark side’s association with evil but emphasizes that a person’s character is the sum total of his choices, rejecting the idea that a single questionable act necessarily undoes decades of consistent adherence to life-serving ideals. On several occasions throughout the game, Cal makes comments such as, “We don’t really have a choice,” to which Cere responds, “You always have a choice.” Indeed, Cere used the dark side once before, to save herself from extended torture at the hands of the Inquisitors and to rescue her Padawan—but the dark side didn’t corrupt her. She had good reasons for doing what she did and had no other effective means of defending herself.

Late in the game, Cal reminds her of her own words when she is about to tap into the dark side unnecessarily, and she stops herself, perhaps realizing that this time it wouldn’t be justified. That scene implies that although the dark side may sometimes be a path to evil, it can’t override free will. This view of good and evil is far from philosophically perfect, but it’s more accurate than the view that Star Wars usually presents.

Cal’s character arc, in particular, is very well written. For the first half of the game, he is driven primarily by fear and haunted by guilt over the death of his master, for which he blames himself irrationally. For a short time around the halfway point of the story, Cal overcompensates for his fear with brash cockiness as he begins to understand the nature of evil. But by the game’s third and final act, Cal calms down considerably and channels his hatred of the Empire into resolve tempered with compassion (when the latter is appropriate). He makes an ally of a former enemy by imploring her to judge people as individuals, not as faceless members of groups they belong to. During another well-written scene, Cal makes peace with his master’s death and rightly assigns blame where it belongs—with the Empire. And, in another unusual twist for Star Wars, Cal becomes significantly more powerful when he learns to subjugate his emotions to his reason, by which time the power-hungry Second Sister is no match for him.

One theme in particular runs deep throughout the entirety of Fallen Order’s main campaign, though it’s conveyed so subtly that it’s easy to miss if you aren’t actively reading between the lines: It’s morally appropriate to hate evil people, but a fundamental difference is between destroying evil for the sake of exacting vengeance and doing so as a means of protecting and advancing the good. The game’s writers seem to suggest—perhaps unknowingly—that this is the true danger of the dark side: its propensity to foster anger and destruction at the expense of the good rather than in service of it. I like to think that this really is what Cal warns Cere about when she’s about to channel the dark side at the end of the game. It certainly makes for a much better message than “The dark side is evil because it just is, and if you touch it even once, you’ll become evil, too.”

Mechanically, Fallen Order is generally solid. It runs on Unreal Engine 4, and if you’ve played any of the Tomb Raider reboots, it will feel familiar. Cal is a competent lightsaber duelist, though not a master, as evidenced by the simple (but effective) nature of his melee combos. By the time you accrue enough skill points to purchase every available skill, Cal feels like a strong and confident Jedi Knight, and you’ll have had enough practice to control him fluidly in combat. Jumping and climbing occasionally are imprecise, but the controls otherwise are tight and intuitive.

Fights are all about defense and timing, and it’s a welcome change from most Star Wars games, which usually hand the player a lightsaber and say, “Here, go nuts.” That’s all well and good, but the slower, more deliberate combat in Fallen Order is more enjoyable than wild slashing. On higher difficulty settings, Cal can’t survive more than two or three hits, so you must study carefully the way enemies move, evade or parry their strikes, and choose the perfect moment to counterattack. The flow of combat also subtly reinforces one of the game’s core themes: Don’t resort to violence if it isn’t necessary, but if it is necessary, strike down your enemies decisively and don’t weep for them.

Visually, the game is stunningly gorgeous—Cal almost looks like a real-life person when viewed from certain angles. My only major complaint with Fallen Order concerns its music. There isn’t much of it, and what little there is sometimes is recycled from the movies or played at inopportune moments (why am I hearing dramatic battle music when I’m exploring a quiet forest by myself?). Otherwise, the audio design is top-notch—the voice acting in particular.

If, like me, you find yourself caring less and less about Star Wars with each new release since The Force Awakens, I think you’ll be pleasantly surprised by Jedi: Fallen Order. Even if you don’t normally play video games, I think you should give it a try—setting the difficulty to “story mode” makes combat very forgiving in an effort to let you focus most of your attention on the engaging plot. All in all, the game is an excellent example of the fact that video games can, indeed, be art. Let’s hope that future entries in the Star Wars universe follow Fallen Order’s example and once again give us good reasons to fantasize about being Jedi.

Let’s hope that future entries in the Star Wars universe follow Fallen Order’s example and once again give us good reasons to fantasize about being Jedi. Click To Tweet

Tim is the assistant editor of The Objective Standard. He also writes about personal finance, small business ownership, and video games on a freelance basis. His first novel, "The Beggar's Key," is tentatively scheduled for publication in 2020.
View all posts by Tim White →
The Ascent of Jacob Bronowski: The Life and Ideas of a Popular Science Icon by Timothy Sandefur
Peaceful Death Threats by Bosch Fawstin
Return to Top