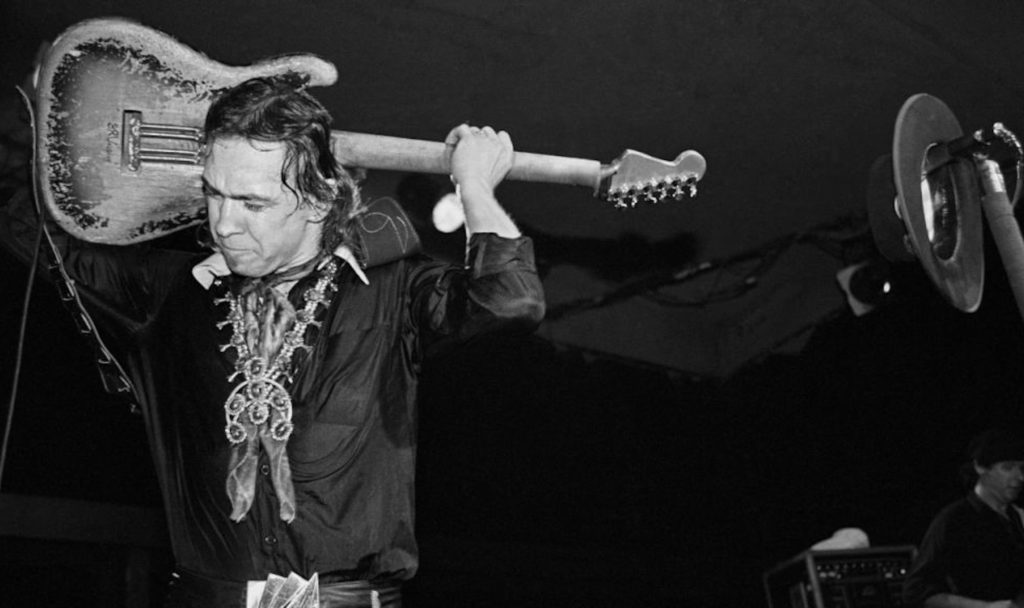 Eric Clapton once said that Stevie Ray Vaughan played guitar as though “it all just came straight from him, seemingly without any effort.”1 And it did sometimes seem as if performing came as naturally to him as breathing. During a televised concert in 1989, for example, Vaughan broke a string in the midst of a solo—but continued playing for a full half minute, then swapped guitars and finished the song without missing a note.

That apparent effortlessness, however, was actually the fruit of intense discipline. “Stevie always had a guitar in his hands,” explains one former bandmate. “He played all of the time. As soon as he woke up in the morning. . . . He was completely dedicated to the instrument, and he’d work on his playing constantly.”2

During his meteoric career—brilliant, yet terribly brief—Vaughan became a worldwide sensation. And his story—available in a new book by journalists Alan Paul and Andy Aledort—is one of tragedy and triumph.

Vaughan was born in Dallas in 1954, the son of an abusive alcoholic. His older brother Jimmie introduced him to the guitar when he was seven, and he quickly taught himself the styles of such legendary blues performers as Clapton, Jimi Hendrix, and Albert King. “Stevie would play records for hours,” recalls another bandmate. “He’d pick the needle up, play a lick, then run it back and play it fifty or a hundred times trying to get everything precisely right.”3 By the age of ten he was good enough to join a band, and he made his first recordings at the age of sixteen.

After dropping out of school to focus on music, Vaughan moved to Austin, where he became a local sensation. The decade that followed was one of constant practice and performances. By 1982, he was playing with the band for which he is most famous, Double Trouble. That March, one of their shows was attended by record producer Jerry Wexler, who was impressed enough that he arranged for them to perform at the Montreux Jazz Festival in Switzerland. Among the attendees were musicians Jackson Browne and David Bowie. Bowie promptly asked Vaughan to record the guitar tracks for his 1983 hit “Let’s Dance,” and Browne invited Vaughan’s band to record in his Los Angeles studio. There they began making what would become their breakthrough album, Texas Flood.

Yet all was not well. Vaughan had begun drinking as early as the age of six, when he would steal his father’s booze. Drugs such as heroin and amphetamines followed, and by 1985 Vaughan was deeply addicted. His consumption of drugs was astonishing. He would sometimes dissolve cocaine in a glass of whiskey and take that as breakfast. Friends tried to talk to him, including his greatest hero, Albert King. “We gonna have a little heart-to-heart,” King told him. “I been watching you wrestle with the bottle. . . . I tell you what, man . . . the gig ain’t no time to get high.”4 Yet the abuse continued. Finally, in 1986, his doctor told him that if he did not stop drinking and doing drugs, he had only weeks to live.

Vaughan entered treatment and managed gradually to get a hold on his problem. “When he finally made a change, he changed completely,” writes Double Trouble’s Tommy Shannon in an afterword to Paul and Aledort’s book. “He set an example for living a sober life on the highest level, just as he did for playing music.”5 A year later, Vaughan was able to perform again, and at a concert in Nashville, he paused during “Life Without You” to speak to the audience. “Not too long ago, I was a victim of not taking care of myself,” he said. But “to be able to take care of each other, first we must take care of ourselves. . . . If you remember nothing else about today, remember to help yourself so you can help your brothers and sisters.”6

A year later, Double Trouble released In Step (the title referred to Vaughan’s newfound sobriety), which featured some of his best work, particularly the slow instrumental “Riviera Paradise,” an intimate nine-minute meditation that the band recorded in a single take. It was dedicated, Vaughan said, to “everybody who’s still suffering in any way.”7

It all came to an awful end August 27, 1990, when Vaughan’s helicopter crashed shortly after departing a concert in Wisconsin, killing everyone aboard. The great tragedy was that Vaughan’s life would end just at the moment when he had triumphed over the addictions that caused him such misery. He was only thirty-five. Yet in that brief expanse, Stevie Ray Vaughan left lasting monuments to his musical genius—and a lesson about the importance of focusing on the important things in life.

Stevie Ray Vaughan left lasting monuments to his musical genius—and a lesson about the importance of focusing on the important things in life. Click To Tweet

Timothy Sandefur holds the Duncan Chair in Constitutional Government at the Goldwater Institute and is a contributing editor of The Objective Standard.
View all posts by Timothy Sandefur →
The Prometheus Connection, America’s Original Spirit: Rise, Demise, Recovery by Kevin Osborne
What If the Axis Powers Won WWII?