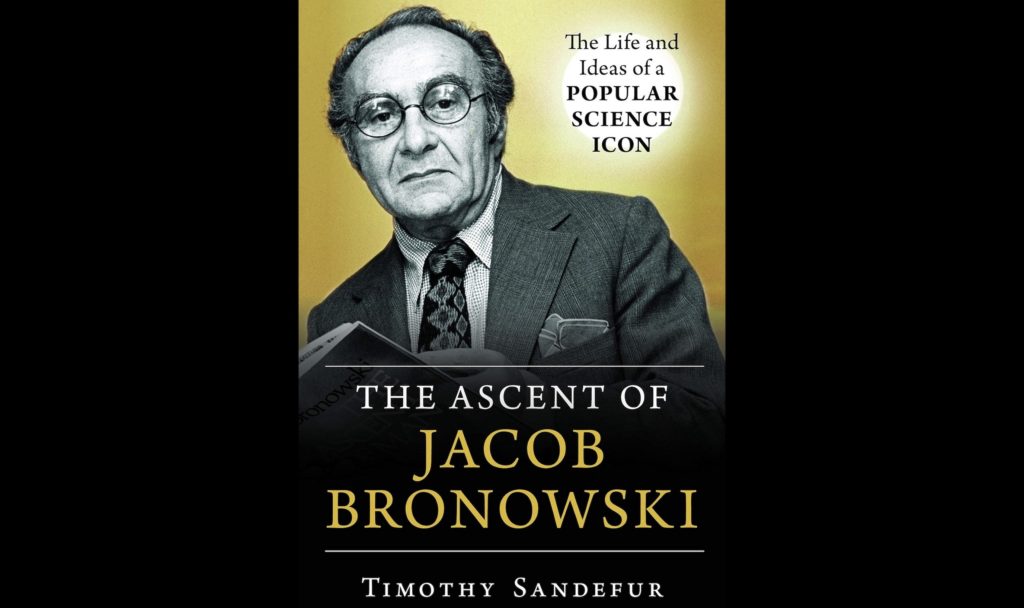 How does one reach young minds and inspire them to explore deeply and ascend the great heights of human achievement? In my case, an important early influence was an older man from Eastern Europe, a Jewish man of small physical stature whom I saw only on video. What gripped my young mind was the sense of being in the presence of a strong intellect who had grasped important truths that really mattered.

I was a first-year university student in Canada, and I was watching Jacob Bronowski’s thirteen-part BBC series The Ascent of Man. The venue was my philosophy of science course with Professor Michael Ruse, a lively and colorful Englishman and specialist in the philosophy of biology who frequently was an expert witness, on the pro-reason side, in the evolution-versus-creationism trials then in full-throated debate in the United States. Ruse lectured on Copernicus, Newton, Darwin, and Einstein—but once a week he showed us an episode of The Ascent of Man, Bronowski’s grand-sweep history and narrative of human struggle and accomplishment in the sciences. Bronowski’s companion book to the video series was one of the few assigned university texts I read cover to cover and is one that I have kept with me over the years.

Timothy Sandefur’s The Ascent of Jacob Bronowski is the work of a kindred Bronowski-inspired spirit, one that has resulted from the investment of years of sustained effort to research and retell the drama of Bronowki’s colorful, jam-packed life. The story takes us from his childhood migration from Poland—an unhappy place for pretty much everyone, but especially for Jews; to England in 1920, where his family sought the chance for a decent life; to his student days at Cambridge University in the 1920s and early 1930s, where he pursued an ambitious, personalized curriculum in math and science as well as poetry and literary criticism; to his early professional efforts as a modernist poet and a professor of mathematics; to his love affairs among a circle of friends and colleagues with complicated and alternative sex lives; to his World War II work on the mathematics of rocketry and his anguished ambivalence over the need to develop atomic bombs to end the war; to his follow-up investigations of and technical and ethical ruminations upon the bombs’ effects on Nagasaki and Hiroshima; to his postwar career as a wide-ranging scientist and humanist, culminating in worldwide fame as the author and personality of The Ascent of Man.

Cambridge after the Great War was both in moral disarray—aghast at the loss of verities and confidence of the prewar era—and awash with the brashness of youths determined to assert themselves and to experiment. Perhaps the most famous literary critic of his age, I. A. Richards, was a professor there, and he and his students grappled with and intensely debated the jolting works of T. S. Eliot and James Joyce. Bronowski himself became an experimental poet of note and wrote many exploratory reviews of modernist poets, including Robert Graves and Laura Riding, with whom he was soon to have a close collaboration followed by a mercurial falling out.

The range of Bronowski’s intellectual accomplishments is astonishing, and it flowed from a powerful and passionate mind curious about everything and committed to the beliefs that everything is connected and that everything matters. “Knowledge is personal”—no matter the abstruseness of the subject nor its apparent distance from immediate human affairs.

That Renaissance-man premise that both deep and—as important—broad knowledge is essential to human life was profoundly at odds with much of early 20th-century intellectual life, which was plagued by a series of dichotomies—science versus the arts, facts versus values, reason versus passion, and so on. Early positivism and early existentialism had sundered all domains of human experience and raised doubts that anything had any meaning or any value.

Bronowski rebelled against those dichotomies. Among his later connections was C. P. Snow, most famous for articulating the “two cultures” thesis, first delivered as the Rede Lecture at Cambridge in 1959. Snow, too, traveled in both scientific and literary circles and yet was disturbed to think and feel that “the intellectual life of the whole of western society is increasingly being split into two polar groups”—to the point where artists could hardly talk with biologists, poets and mathematicians had no common framework, and moralists and physicists seemed to each other to be speaking, as Snow put it, “Tibetan.” The fragmenting was dispiriting to Snow, as it was to Bronowski and many others. “Bronowski’s conviction,” Sandefur writes, was that “science was just as profoundly human, and as true to the needs of individual man, as poetry” (92). In fact, Sandefur’s deep research reveals that Bronowski was the originator of the two cultures thesis, which Snow went on to develop so effectively as a diagnosis of mid-century intellectual life—and a step toward bridging the vast gulf that divided fields that were all equally essential to flourishing.

Much of Bronowski’s subsequent work, including his Science and Human Values, seeks to repair the breach, and his The Ascent of Man is a powerful exhibition of thrilling engagement with the great questions of life. Bronowski asked: Where did we come from? Where are we now? What is our destiny? And how do we reconcile a belief that science has lifted us from brutish subsistence and filled us with aesthetic wonder at the majesty of it all—and at the same time has contributed to the obliteration of millions of human beings in war and is complicit in atrocities such as the Holocaust perpetrated by the National Socialists?

Sandefur’s well-trained and wide-ranging mind, brought to bear on a subject of deep personal interest, has delivered prose that is both graceful and direct. What emerges from his biographical portrait is the closest any of us now can get to one of the great humanistic minds of the previous century.

Timothy Sandefur’s biographical portrait of the popular science icon Jacob Bronowski is the closest any of us now can get to one of the great humanistic minds of the previous century. Click To Tweet

Stephen R. C. Hicks is professor of philosophy at Rockford University, senior scholar at The Atlas Society, executive director of the Center for Ethics and Entrepreneurship, and the author of two books in philosophy and intellectual history: Explaining Postmodernism: Skepticism and Socialism from Rousseau to Foucault and Nietzsche and the Nazis.
View all posts by Stephen R. C. Hicks →
Doctor Sleep by Mike Flanagan
Star Wars Jedi: Fallen Order
Return to Top