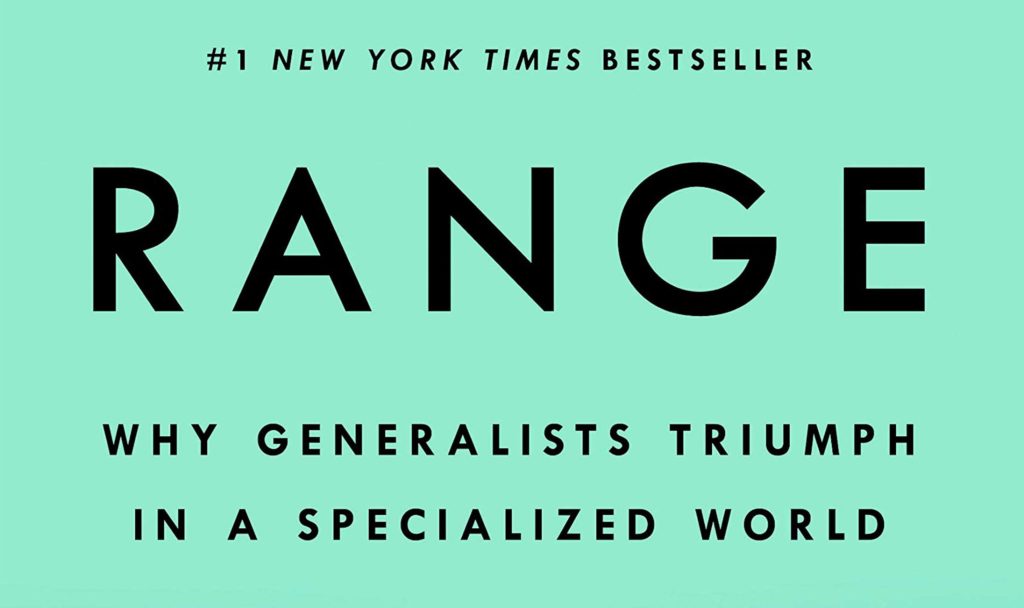 In recent years, many people have embraced specialization as the preferred method for cultivating elite performance in fields such as sports, medicine, music, and robotics. Parents, coaches, and teachers are pushing children at increasingly earlier ages to become specialists through lots of deliberate practice and repetition. Similarly, businesses are implicitly and explicitly promoting deep specialization by cultivating and seeking out candidates with an alphabet soup of esoteric credentials. Author David Epstein argues that the embrace of hyper-specialization as the universal linchpin for success “infects not just individuals, but entire systems, as each specialized group sees a smaller and smaller part of a large puzzle” (12).

Epstein, who has written for Sports Illustrated and ProPublica, published The Sports Gene in 2012, in which he discusses how people who specialize in a particular sport later in life are more successful in the long run than those who specialize earlier in life. He builds on that discussion in his latest effort, Range: Why Generalists Triumph in a Specialized World.

Range is a layered and methodical analysis that draws upon a wealth of research and engaging anecdotes to demonstrate that the key factors driving expertise are not cookie-cutter specialization but attributes and abilities such as “diverse experience, interdisciplinary thinking, and delayed [specialization]” in a specific field (13). These are the qualities of those Epstein calls generalists, people “who start broad and embrace diverse experiences and perspectives while they progress” toward eventually choosing a career specialty (14).

To illustrate the differences between specialists and generalists, Epstein compares Tiger Woods, who reportedly began training for his golf career before he turned two, with Roger Federer, who played many sports before committing to tennis in his late teens. Tiger’s “precocity” and “clarity of purpose” get lots of attention in the media, and his success is credited to the widely touted ten-thousand-hours rule of expertise. Epstein explains:

Tiger has come to symbolize the idea that the quantity of deliberate practice determines success—and its corollary, that the practice must start as early as possible. . . . Our best-known icons of success are elevated for their precocity and their head starts—Mozart at the keyboard, Facebook CEO Mark Zuckerberg at the other kind of keyboard. The response, in every field, to a ballooning library of human knowledge and an interconnected world has been to exalt increasingly narrow focus. (6)

In contrast, Federer symbolizes the late bloomers who succeed without the single-track focus that many now consider indispensable to success. Generalists, Epstein explains, “typically devote less time early on to deliberate practice in the activity in which they will eventually become experts,” instead using that time to “gain a range of proficiencies from which they can draw.” In what Epstein calls “field sampling periods,” generalists follow a variety of interests for relatively short periods of time. Thus, they develop a broad range of skills while learning “about their own abilities and proclivities; and only later do they focus in and ramp up technical practice in one area” (7).

Because they don’t regard their paths as irrevocably set in stone, they continue fine-tuning their vision of the ideal career, pursuing what Epstein calls optimum “match quality.” This willingness to weigh new knowledge about oneself and one’s options often enables generalists to achieve greater personal fulfillment.

was a sculptor, painter, master architect, and made engineering designs for fortifications in Florence. . . . Like anyone eager to raise their match quality prospects, Michelangelo learned who he was—and whom he was carving—in practice, not in theory. He started with an idea, tested it, changed it, and readily abandoned it for a better project fit. (164)

By integrating knowledge and experience from different fields, Michelangelo was able to innovate in ways that his peers could not have imagined. For instance, Renaissance architects followed rules based on geometric forms. But Michelangelo’s experience as a painter and sculptor led him to analogize a building with a body, to view its supporting structures as muscles, and thus to break aesthetic and structural bounds.1

Similarly, German astronomer Johannes Kepler discovered laws of planetary motion by observing things that most thought had no connection to the field, including properties of light, heat, odor, magnetism, optics, and more.

Epstein reveals how curriculum developers foster and reward narrower and narrower critical competencies. He references a study by professor James Flynn, who compared the GPAs of students at one of America’s top state universities with their results on a critical-thinking test. The study showed that almost none of the students knew how to apply the general principles of their disciplines when evaluating claims outside their own fields, implying that the achievement of specialized knowledge often does not translate to broad and useful proficiency.

On the other hand, Epstein’s research indicates that students who lack deep, field-specific knowledge but possess a wide range of proficiencies are often better at identifying principles that can lead to innovation. For example, in 1965, Nintendo president Hiroshi Yamauchi, whose company was too in debt to afford top graduates, hired Gunpei Yokoi, who had struggled through his degree and been rejected from top-tier firms. Although he was not a high-ranking specialist, he was able to leverage his broad knowledge of older, relatively cheap calculator technology. Over the next few years, he brought Nintendo back from the brink of bankruptcy with hit games such as Love Tester and Donkey Kong (Game & Watch), and systems such as Nintendo NES and Game Boy, which “sold 118.7 million units, far and away the best-selling console of the twentieth century” (196).

People who integrate knowledge and skills from various fields—that is, generalists—increasingly are driving “deep-domain innovation.” In 2001, scientists from Eli Lilly and Company posted online twenty-one chemistry problems that stumped them. Soon, strangers were solving these problems and “creating substances that had befuddled Eli Lilly chemists. . . . One molecular synthesis solution came from a lawyer whose relevant knowledge came from working on chemical patents. . . . He saw parallels [in tear gas] to the chemical structure of a molecule” they were trying to create (172–73). The online post was so effective in solving the company’s challenges that Alph Bingham, vice president of research and development strategy, started a new company based on this crowdsourcing concept: InnoCentive posts problems that stump industry specialists and pays those who solve them.

Drawing from a wide pool of research pertaining to everything from early education to advanced scientific instruction, from athletic training to career development, Epstein cogently argues that generalists—people who ultimately do specialize, but only in conjunction with knowledge integrated from various fields—often get better results than those who focus solely on one field. Whether you’re planning your career, considering changing fields, raising a child, or educating one, Range can provide helpful insights. In a world where hyper-focus on specialization is leading to greater and greater compartmentalization, this book is a welcome call for a renewed focus on integration.

In a world where hyper-focus on specialization is leading to greater and greater compartmentalization, Range by @DavidEpstein is a welcome call for a renewed focus on integration. Click To Tweet

David King graduated from Rutgers University in 2006 with degrees in finance and economics. He currently works as a data analyst in Minnesota.
View all posts by David King →
The Benevolent Spirit Behind Spongebob Squarepants
Dorothy Fontana Was ‘a Damn Good Writer’

1. For more on how Michelangelo relied on his painting and sculpting expertise in finishing St. Peter’s Basilica, see James S. Ackerman, The Architecture of Michelangelo (New York: Penguin, 1966), 96.