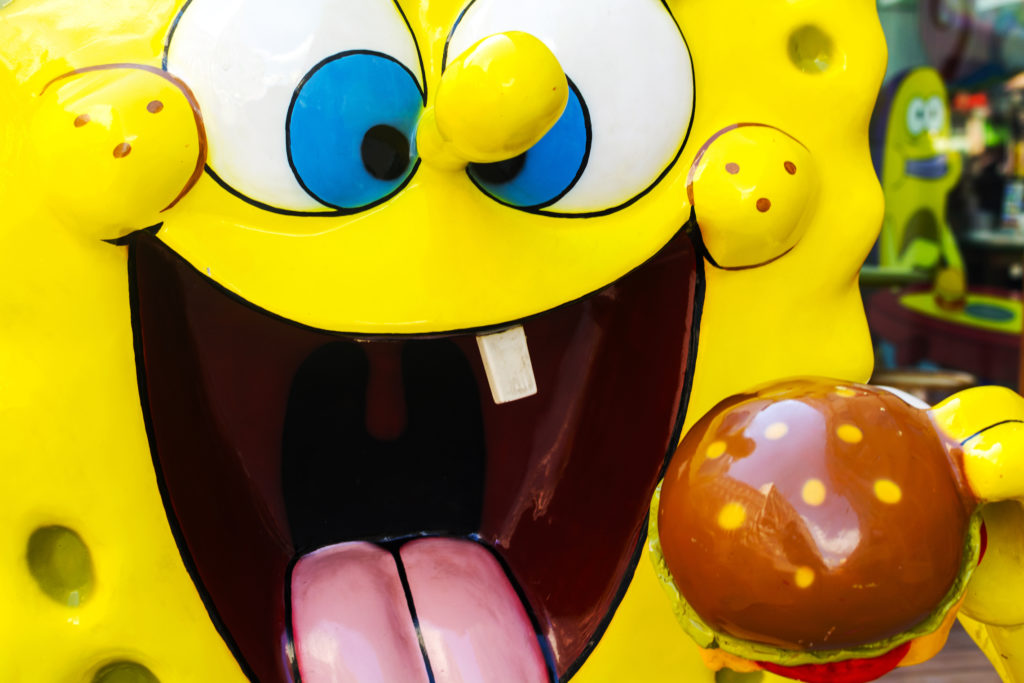 The name Stephen Hillenburg may not be widely known, but the animated yellow sponge he created immediately reminds many people of childlike wonder, carefree laughter, and colorful quirkiness. Hillenburg was the creative mind behind one of the most iconic and successful cartoons of all time, SpongeBob SquarePants.

Born in Lawton, Oklahoma, and raised in Anaheim, California, Hillenburg developed a fascination with the ocean and marine life. He grew up watching films made by the French oceanographer Jacques Cousteau, whom Hillenburg credits as providing him with “a new view into the world.” He would explore for hours on end the countless tide pools near his home, often returning with various creatures such as starfish, crabs, mussels, barnacles, and sea urchins, which he then would draw. In 1977, Hillenburg attended the International Tournée of Animation where he viewed Dutch animator Paul Driessen’s film, The Killing of an Egg, which, he said, was “uniquely strange and . . . lodged itself in my head early on.”1 It inspired him to think more seriously about how he could use animation to bring his own ideas to life.

Hillenburg continued exploring his interest in marine life and art in high school, eventually deciding to major in marine science and minor in art at Humboldt State University. After graduating, he taught marine biology at Orange County Marine Institute for two years. In that time, Hillenburg wrote and illustrated a comic book, The Intertidal Zone, to educate his students on the diversity of tide pool animals. This laid the foundation for what later would become his most famous creation.

Aiming to develop his animation skills, Hillenburg enrolled at the California Institute of the Arts, where he created two short films: The Green Beret, a story about a deformed Girl Scout with enormous hands who knocks down houses and destroys whole neighborhoods as she attempts to sell Girl Scout cookies;2 and Wormholes, a piece that demonstrates the effects of general relativity on perception by taking the perspective of a fly.3 The latter was shown at several animation festivals, including the Ottawa International Animation Festival, where it won the award for best concept.

Upon seeing his film, Joe Murray, the creator and director of Rocko’s Modern Life, hired Hillenburg to direct the fourth and final season of the show— his first job in animation. Murray later recalled:

His work on my show was top-notch. I’ll never forget staying up late, working out the kinks of episode after episode together, or him crying from laughter while playing a tape of burp-talking he wanted to use to make an episode. It was obvious that someone in entertainment would have snatched him up quickly, had I not have been lucky to have gotten to him first. I remember an executive at Nickelodeon wondering if he was even right for television. He wasn’t. He was right for new television. Always striving for something better, fresher, different. He was passionate, brilliant, and tireless.4

With his confidence bolstered by his work on Rocko’s Modern Life and encouraged by his friend Martin Olson, a writer for the show, Hillenburg pitched his own idea for an animated series to executives at Nickelodeon. According to Eric Coleman, vice president of animation development and production, Hillenburg “really went above and beyond.” For the pitch, he and storyboard artist Derek Drymon created a terrarium encasing a miniature replica of what would become “Bikini Bottom,” the setting of SpongeBob SquarePants. Within it were miniature replicas of each of the characters. During the pitch, both Hillenburg and Drymon donned garish Hawaiian shirts while playing Hawaiian music on ukuleles—all while describing in song-verse the premise of the pilot episode and each of the character’s personalities and motivations. Reportedly, several executives had to leave the boardroom to compose themselves, and, within minutes, SpongeBob SquarePants was green-lighted for production.5

The story of SpongeBob SquarePants centers around an enthusiastic and optimistic yellow kitchen sponge going on adventures and getting into mishaps with his friends, among them his pet snail, Gary; a dim-witted but well-meaning pink starfish, Patrick Star; an arrogant and ill-tempered octopus, Squidward Tentacles; an athletic and intelligent squirrel, Sandy Cheeks; a miserly crab, Mr. Krabs; a one-eyed, envious plankton, Plankton; and a nervous pufferfish, Mrs. Puff.

Despite the challenges SpongeBob faces and the naysaying of some of the other characters, he consistently maintains a benevolent sense of life. He is curious and excited about the adventures promised by each new day, always answering with his iconic phrase, “I’m ready! I’m ready!” He is passionate about his job as a fry cook at a fast-food restaurant and enjoys the company of his friends. Each episode brings a narrative that employs subtle humor and slapstick comedy, reminding us to take a lighthearted approach to life. The series affirms the goodness of looking at the world with childlike imagination—unafraid and uninhibited.

This, perhaps more than anything else, has made it enormously successful. The show and its cast have garnered critical acclaim and won numerous awards, among them six Annie Awards, three ASCAP Film and Television Music Awards, four Emmy Awards, fifteen Kids’ Choice Awards, and many more. It has become the fifth longest-running show in American television history, spanning twelve seasons and 251 episodes, and airing in more than two hundred countries. The series also has led to two feature-length films (a third film is set for release in May 2020) and has brought in $13 billion in merchandise sales as of 2017.6

It stands as a testament to the power of the imaginative spirit of Stephen Hillenburg.

Sadly, in March 2017, Hillenburg disclosed that he was diagnosed with amyotrophic lateral sclerosis (ALS), a fatal neurodegenerative disorder. He died at his home on November 26, 2018, at the age of fifty-seven, from heart failure brought about by his ALS. Hillenburg was described by his friends and family as “shy and very private.” What he left behind, however, was a legacy of youthful enthusiasm and exuberant optimism. He infused his creations with boundless energy, provided joy for those who delighted in them—and he lives on, continuing to inspire many a child-at-heart to this day.

Stephen Hillenburg, the creator of SpongeBob SquarePants, left a legacy of youthful enthusiasm and exuberant optimism. Click To Tweet

William Nauenburg works as a freelance writer and blogger. He earned his bachelor's degree in philosophy from San Diego State University and currently resides in San Diego, California.
View all posts by William Nauenburg →
Come to TOS-Con 2020: Philosophy for Freedom and Flourishing!
Range: Why Generalists Triumph in a Specialized World by David Epstein

5. Karl Smallwood, “The Story of How SpongeBob SquarePants Made It to Air,” December 4, 2015, http://www.todayifoundout.com/index.php/2015/12/spongebob-squarepants-made-air/.