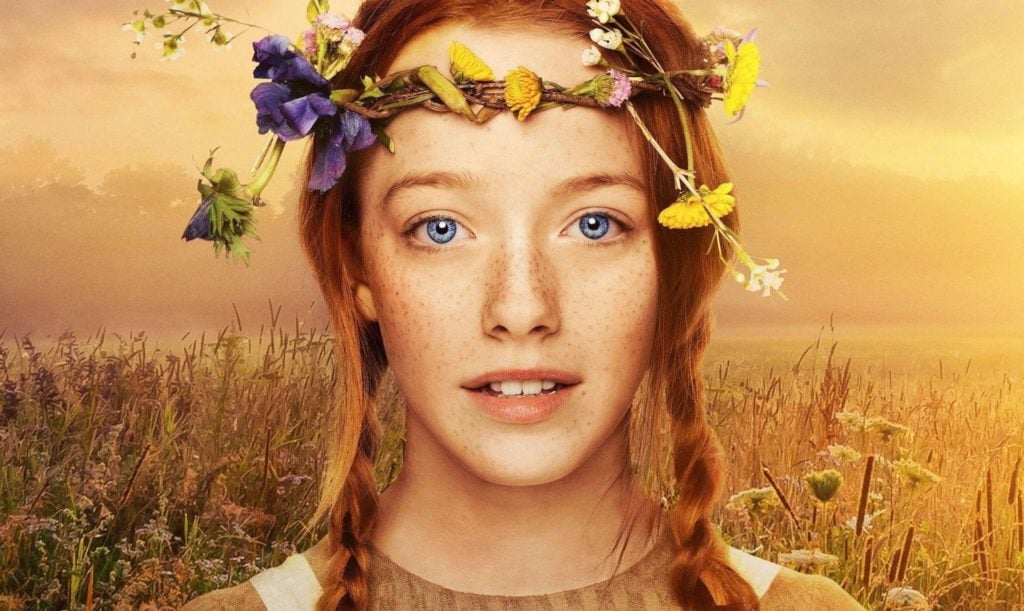 In an age of Tiger King and Game of Thrones, finding soul-fueling TV shows typically takes way more time than I can commit to it. So I was extremely lucky when a playlist my wife was listening to included the beautiful Celtic-sounding anthem “A Big Day Ahead” from the show Anne with an E. It’s a crime, I’ve since learned, that I was not introduced to the 1908 novel Anne of Green Gables in grade school. Lucy Maud Montgomery’s gorgeously written classic may have remained unknown to me if not for Moira Walley-Beckett’s TV adaptation of the story about a life-loving, independent girl who faces down prejudice, passionately pursues her values, and helps others to do so, too.

Set in mid-19th-century Prince Edward Island, the tale begins when the repressed and seemingly unreflective Cuthbert siblings, Matthew and Marilla, (accidentally) adopt an eleven-year-old redheaded dynamo. Inquisitive, talkative, and expressive, Anne Shirley is like a creature from another planet amid the Cuthberts, a point of both tension and comic relief. After her parents’ early demise, Anne survived an often traumatic decade in and out of an eerie orphanage by nursing herself on novels, poetry, and her own unbounded imagination. Despite her tender age, she has allowed no rejection or ridicule to fundamentally alter her sunshiny view of life. Nonetheless, she’s a child who’s never learned how to deal with her emotions, which tend toward extremes.

After an inauspicious start, the Cuthberts’ parenting career blossoms as they reflect on their role as the girl’s guardians. When Anne skips school and lies about it, the stern Marilla calls the town minister to lecture Anne on her impropriety. “Honesty is the best policy,” the minister counsels her. Never one to neglect her questioning mind, she asks, “But honesty isn’t really a policy, is it?” “I don’t care what you think,” is the minister’s hot retort. “About anything?,” Anne slips in before he launches, sincerely, into his proposed “solution.”

I see what the problem is. I do indeed. And I have divined an answer. This problem is easily solved. If the girl doesn’t want to go to school, then she shouldn’t go. She should stay home and learn proper housekeeping until she marries. “And then Lord God said, ‘It’s not good that the man should be alone. I will make him a helper fit for him.’” There’s no need for her to bother with an education. Every young woman should learn how to be a good wife.

The minister’s visit flings Marilla into a moody reassessment of her own life, and when Anne confides that she’s not fond of the old man’s plan for her, Marilla says,

Seems to me you should decide for yourself what you will do and be, and set your mind to it. You’ve got a good and nimble mind, Anne. I don’t see why you should limit it. In my day, we didn’t get to choose. I think you should make your own decision.

Gradually, as they learn more about raising a life-loving child, the Cuthberts’ lives brighten and become more spiritually rich. Once quite insular, they nurture new and deeper relationships based on shared values. Marilla, never one to meddle, learns to tactfully talk sense into other parents, helping them to grant their children an appropriate measure of independence—or otherwise grasp what their long-range self-interest requires. And as meek as Matthew first seems, he emerges as the family’s foundation of quiet wisdom.

It’s a telling aspect of Anne’s character that, even in a very religious society, she never learned to pray before being adopted by the Cuthberts. Despite this—or rather, in part, because of this—she is a profoundly spiritual child. She exalts beauty in nature, in words, and in people’s souls, and her reverence for true love draws her away from those who immaturely trivialize it. Her moral ideal appears to be living a full and meaningful life doing the things she loves while surrounded by the people she loves. Overflowing with curiosity, joy, and kindness, she emboldens many in the small town of Avonlea as she exposes criminals, cultivates creativity, fights for free speech, and builds unbreakable bonds.

So many people in Anne’s orbit develop so quickly and in such heartwarming ways that you might have trouble deciding on a favorite, though Anne is often the catalyst for that growth. She befriends a sensitive young artist, Cole, who, after being bullied, stops going to school. Instead, he spends his time sculpting at Anne’s secret hideout in the woods. When some boys discover and destroy the hideout, shooting all of Cole’s sculptures, he avenges himself in a manner he later regrets. Believing he’ll be forced to give up sculpting and work on his parents’ farm, he contemplates suicide. But Anne convinces him that a meaningful life is “not about what the world offers you.” Happiness depends on “what you bring to the world”—on the values that you bring into existence—and, Anne tells him, “you bring so much.” Similarly, when another young girl is wrongly shamed for having “loose morals,” Anne assures her, “No one but you is allowed to dictate your worth.”

At times, particularly when her cherished values are at stake, Anne allows her passionate intensity to get the better of her. But she always regains her composure, recognizes that there’s something she can do to defend her values, and takes spirited action. Whether thinking on her feet or enlisting others in elaborate strategies, Anne always learns and improves—and viewers get to do so with her. Further, whereas the setting of a rural Canadian community may at first seem mundane, it provides surprisingly fertile ground for critiquing conformity, racism, sexism, religious fanaticism, xenophobia, and bigotries of practically every shade.

So, if you can stand a tearjerker—and if you enjoy art that glorifies imagination, individualism, free inquiry, and the passionate pursuit of values—you may just fall in love with Walley-Beckett’s Anne with an E.

P.S. If you do fall in love with the show, consider signing this petition encouraging Netflix to renew Anne with an E for a fourth season. I think you’ll also love the book, Anne of Green Gables. Montgomery’s exquisite narration enables readers to peer into the minds of these extraordinary characters.

If you can stand a tearjerker—and if you enjoy art that glorifies imagination, individualism, free inquiry, and the passionate pursuit of values—you may just fall in love with @YoWalleyB’s @AnneTheSeries. Click To Tweet

Jon Hersey is the associate editor of The Objective Standard. His work focuses on intellectual history, specifically, the ideas on which freedom and flourishing depend. He has published in-depth articles on John Locke, Thomas Jefferson, Benjamin Franklin, John Stark, William Wilberforce, Rosa Parks, and more.
View all posts by Jon Hersey →
Heroes of the Pandemic
Kudos to the Cordairs for Standing up to Authoritarians
Return to Top