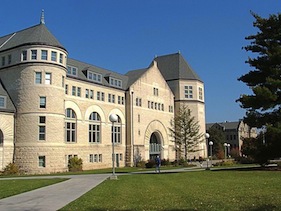 I just returned from the national conference of the Society for Military History (SMH), held at Kansas State University. I presented a paper on the military campaigns of the Roman Emperor Aurelian, arguing that his use of overwhelming force had resulted in a bloodless collapse of two major threats to Rome. At the conference I also had a chance to tour the combat simulation exercises at Fort Riley, to visit the National Cavalry Museum and the Eisenhower Center, and to hear a speech by the former Chairman of the Joint Chiefs of Staff, General Richard Myers.

From the outset the conference set an utterly different tone than one hears at America’s largest historical enclave, the American Historical Association. The difference starts with the membership: the AHA is almost totally academic, while the SMH has a large number of historians working directly with military units, either in uniform or as civilians. The opening speaker at the SMH said two things that I have never heard at the AHA: he praised our “passion for facts,” and he urged us to write history always “with practical value for today.” The purpose of history, I heard repeatedly at the conference, was to place modern events into an historical context, and to offer people—civilians, officers and soldiers—a means to better understand the present, and to plan for the future.

People not involved in academia may not understand how refreshing this was to me. At the AHA, outright hostility will usually greet such claims. I have sat on history panels where the first thing said is “there are no facts—only interpretations; and there are no lessons—only the contemplation of complexity.” I have been in job interviews where the committee members’ eyes glaze over when you even mention political, intellectual or military history. To them, everything is the subjective creation of gender history, “queer” studies, how the average man lived, or the “history” of oppressed peoples. It’s all generally disgusting, irrelevant to understanding human events, and downright boring.

At the SMH, the experience was different in kind. One military officer stated publicly that his job was to write history in order to help military officers make better command decisions. I told him privately that a piece of my work had been delayed in publication because an anonymous reader had written that my work was not history. Why had the reader come to this conclusion? Because I had written of lessons from the past, to which the reader replied: “serious historians” know that “there are no lessons of history.” To him, history is only the “contemplation” of the past. At the AHA, this is accepted doctrine. But the officer at the SMH nearly shouted back “He’s an idiot!!” I agree. The officer deals with situations where HISTORY MATTERS. He works under deadlines, is evaluated by his superiors, and trains soldiers who are going into combat. If they don’t recognize facts, they die. In contrast, the average academic has no one to please except other academics, who usually “think” like he does, else they would not have made it past graduate school and faculty hiring committees.

The Greeks and Romans knew that the purpose of learning history was to live a better life today. In the world of today’s academics, this is all but forgotten. To hear it stated as a matter of fact at a professional conference was like a breath of fresh air. I do hope they accept my paper proposal next year….

This does not mean that I agreed with everything I heard. But the people I disagreed with accepted the presence of an external reality, with facts to be discerned and evaluated. This makes it possible to learn, to uphold truth and to correct one’s errors. In the universe of the AHA, there is no truth, only your subjective opinion versus mine. Can you imagine such people in charge of nuclear bombs?

As to the practical consequences of this, consider: the organizer of the 2003 Columbia University conference at which a professor wished for “a million Mogadishus” was Eric Foner, Professor of History and former President of the AHA. After the applause died down, Foner did not disavow the remark. At the SMH, this would not have been applauded, to put it mildly.

John David Lewis was a contributing editor to TOS from the journal’s second issue, in 2006, until his death, on January 3, 2012. He was a visiting associate professor in the Philosophy, Politics, and Economics Program at Duke University. He held a PhD in classics from the University of Cambridge and taught at the University of London. He had also been a senior research scholar in history and classics at the Social Philosophy and Policy Center, Bowling Green State University, and a fellow of the Foundation for Objectivist Scholarship. He published in journals such as Journal of Business Ethics, Social Philosophy and Policy, Polis, Dike, and Bryn Mawr Classical Review, and lectured on classics, military history, and contemporary political issues at numerous universities and for private groups. His research interests were in ancient Greek and Roman thought, military history, and their connections to the modern day. His books are Solon the Thinker: Political Thought in Archaic Athens (Duckworth, 2006), Early Greek Lawgivers (Bristol Classical Press, August, 2007), and Nothing Less than Victory: Decisive Wars and the Lessons of History (Princeton,2010). Dr. Lewis also wrote for Capitalism Magazine. His website is www.JohnDavidLewis.com.
View all posts by John David Lewis →
Altruism: The Morality of Logical Fallacies
Michael Farris Interview on ‘Fresh Air’
Return to Top