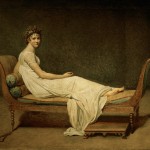 In 1800, the French were enchanted to make the acquaintance of the elegantly reclining, fashionably attired Madame Recamier, 1800 (fig. 1), as portrayed by Jacques-Louis David. A century later, in 1904, they were accosted by the splotchy, psychedelic figures in Matisse’s Luxe, calme, et volupté (Luxury, calm, and pleasure) (fig. 2). Such a radical change in style is startling, particularly given the glacial pace of artistic development over previous centuries. The Renaissance lasted about 200 years, the Baroque about a century. But in 19th-century France, style succeeded style within decades. Neoclassicism, introduced to France by David, was dominant for only forty years or so. Romanticism ruled for about twenty-five, Naturalism for about twenty. Impressionism (as an organized movement) and Pointillism survived barely a decade each. 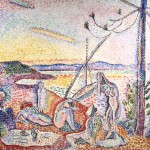 What caused this rapid succession of styles in the 19th century, and what caused the styles to veer in the direction they did? Artistic trends are not the result of some ineffable, collective esthetic consciousness working its will; they are simply the styles that the majority of artists choose to embrace. Ultimately, the choices of individual artists shape a period’s styles. Most artists (like most butchers, bakers, and economics professors) accept without question the ideas popular among their contemporaries. We must seek the explanation for 19th-century changes in art in the cultural and philosophical context of that period.

Let us take a moment, then, to survey the 19th century, a period of astounding advances in human knowledge and enjoyment. To a thorough understanding of gross anatomy and physiology gleaned during the Enlightenment, scientists such as Virchow, Bell, Pasteur, and Lister added knowledge of cellular structure and activity, the brain and nervous system, the disease-causing role of bacteria, and the anesthetic effects of chloroform and ether. As a result of these and other advances in medicine and public health, the average life expectancy soared from about 30 years in 1800 to about 50 in 1900.

Not only were people healthier and longer-lived, they had more leisure time and more means to enjoy life. People of middle-class means and average education avidly read Hugo, Dumas, Dostoevsky, Dickens, and other novelists; they were thrilled by the operas of Verdi and Wagner; they listened spellbound to music by Beethoven, Chopin, and Tchaikovsky; they gazed at Old Masters in newly established art museums; they sauntered through grandly landscaped parks, and journeyed in comfort by rail or steamship.

New knowledge, new ideas, and new works of art circulated much more rapidly due to the explosion of communication and transportation technology during the Industrial Revolution. In 1800, news traveled only as fast as the sailboat or horse that relayed it, routinely taking weeks to cross an ocean or a continent. Books were set in type by hand and printed one laborious page at a time on handmade paper. By 1900, information could be transmitted almost instantaneously by telegraph or telephone, and inexpensive books and periodicals were printed from huge rolls of machine-made paper on electric-powered rotary presses with machine-cast type.

This increase in the speed at which information could be transmitted or reproduced was certainly a factor in the rapid changes in art: Reproductions and reviews of new artworks could travel more rapidly than ever before; thus, new styles could be more readily embraced or rejected. But this does not explain what caused artists to move from producing and appreciating the likes of the Madame Recamier to producing and appreciating the likes of the Luxe, calme, et volupté. The explanation for that lies not in the realm of technology, but in the realm of ideas. . . .

Dianne Durante (PhD, University of Cincinnati) is the author of Outdoor Monuments of Manhattan: A Historical Guide (New York University Press) and Forgotten Delights: The Producers, A Selection of Manhattan's Outdoor Sculptures , both of which include substantial discussions of the nature of art and of esthetic analysis and evaluation. She is a freelance writer, lecturer, and exhibition designer, and maintains www.ForgottenDelights.com, a website on art.
View all posts by Dianne Durante →
Hezbollah Murders 56 Lebanese, Including 34 Children
From the Editor, Fall 2006
Return to Top