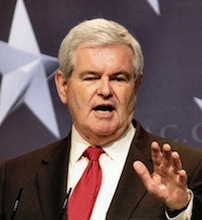 CBS News reports that presidential candidate Newt Gingrich said that he is “convinced that if we do not decisively win the struggle over the nature of America” by the time his grand-children are his age, America will be “a secular atheist country, potentially one dominated by radical Islamists and with no understanding of what it once meant to be an American.”

A spokesman for Gingrich said that he forgot to add the “or” in the statement. But still, to treat secularism and Islam as equally anti-American is absurd and outrageous.

Secularism merely denotes ideas that are non-religious; it does not specify whether those ideas are rational or irrational, pro-life or anti-life. Islam, on the other hand, specifically denotes irrational and anti-life ideas—ideas that lead people to fly passenger jets into skyscrapers, execute gays, stone adulterers, enslave nations, and seek a sharia-ruled world.

Equating secularism with Islam is like equating a liver, which can be healthy or unhealthy, with a cancerous tumor.

Fighting for Freedom is One Thing. Doing so Effectively is Another.
UNESCO Embraces PLO Terrorists
Return to Top