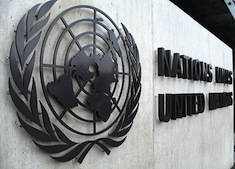 The Associated Press observes that “bashing” the United Nations has become popular among Republican presidential candidates, and that it “seldom fails as an applause line,” meaning such rhetoric resonates with voters.

Mitt Romney says the U.N. too often becomes a forum for tyrants when it should promote democracy and human rights. Newt Gingrich pledges to take on the U.N.’s “absurdities.” Herman Cain says he would change some of its rules. Rick Perry says he would consider pulling the United States out of the U.N. altogether.

Great. But they should do more than softly condemn this organization and “consider” disassociating with it.

The U.N. is a fundamentally corrupt institution that supports tyrannical regimes and terrorist groups across world—from giving a platform to Mahmoud Ahmadinejad and his efforts to annihilate Israel, to granting the Palestinian Liberation Organization membership in UNESCO, to appointing North Korea as the chair of the Conference on Disarmament. The U.N.’s actions are consistently pro-tyranny and anti-America.

A Republican presidential candidate who cares about freedom and America would not merely criticize the U.N. or consider pulling the United States out of the tyrannical cesspool. A candidate who genuinely loves liberty would set forth a formal plan now, during his campaign, for disbanding this gang of tyrants and enablers, defunding it, and kicking it out of America. And he’d pledge to begin pursuing this goal unwaveringly and to the best of his ability, immediately upon taking office.