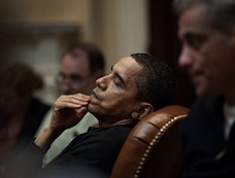 The Obama administration wants to reestablish funding for the United Nations Educational, Scientific and Cultural Organization (UNESCO). American funding for UNESCO was cut upon UNESCO’s admission of the terrorist organization, Palestinian Liberation Organization (PLO). U.S. law forbids the funding of the United Nations or any of its specialized agencies “which accords the Palestine Liberation Organization the same standing as member states.” The Obama administration is now seeking a waiver to exempt itself from this law.

Since its inception, the PLO has repeatedly attacked Israel and slaughtered Israelis. Massacres include the Coastal Road Massacre, in which PLO agents hijacked an Israeli bus and murdered 38 civilians, 13 of whom were children—and the so-called “Second Intifada,” in which the PLO murdered more than one thousand Israelis. This is the PLO’s MO: attack Israel, kill Israelis.

Another prominent member of UNESCO—so prominent that it is a member of a human rights committee—is Syria. In another post, I recounted the horrors the Syrian regime is forcing upon its citizens:

The Syrian regime has been torturing people in hospitals, killing, raping and torturing children, and killing thousands of protesters who oppose the Syrian tyranny. These horrors alone—even aside from Syria’s alliance with the Iranian theocracy and their support of terrorist organizations such as Hezbollah—should have made any person or government shriek in horror in being associated with such evil.

UNESCO is clearly a fundamentally corrupt, pro-tyranny organization. That the Obama administration seeks to loot Americans to pour money into this foul organization is monstrous.

Americans should demand that Congress stop Obama’s efforts to fund UNESCO and that the United States immediately end all affiliation with it.