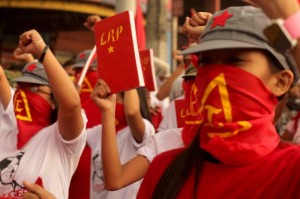 The communist insurgency known as the New People’s Army has admitted to bombing a carnival in the Philippines and injuring scores of civilians, including many children. The NPA has apologized for the civilian casualties, as if such a thing were unforeseeable when attacking a carnival.

In their effort to establish a dictatorship in the Philippines, the NPA has inflicted brutality after brutality upon the Filipino people—from perpetrating massacres, to “recruiting” children as soldiers in their cause, to destroying the property of those who refuse to bow to their collective will.

Filipinos who care about their lives and liberties must demand that the Philippine government summarily destroy the New People’s Army, and, to do so, Filipinos will have to recognize and embrace the moral rightness in taking such action. As I wrote in “Around the World: ‘The Communist War against the Philippines and Why It Rages On’”:

The Philippine armed forces clearly have the means to destroy the communist threat; what Filipinos and their government need is the moral resolve to allow the military do so.

If Filipinos want peace, security, and prosperity, they must come to recognize that the communist ideal of “from each according to his ability, to each according to his need” is morally wrong, politically wrong, and thus economically disastrous. Filipinos must demand that their government end the peace talks with the Communist Party, destroy the New People’s Army, and demand that all communist groups terminate their activities immediately or face retribution.

The NPA’s latest atrocity further underscores the urgent need for the Philippine government to destroy the communist menace.

Joshua (John M.) Lipana was, until his death in 2013, an assistant editor of The Objective Standard Blog and a freelance writer based in the Philippines. His writings appeared in numerous print and online publications, including Free Enterprise,Capitalism Magazine, NewsReal Blog, and The American Thinker.
View all posts by Joshua Lipana →
Why the Murders in Benghazi “Should Shock the Conscience of People of All Faiths"
Islamists Embrace Universal Rights Violations
Return to Top