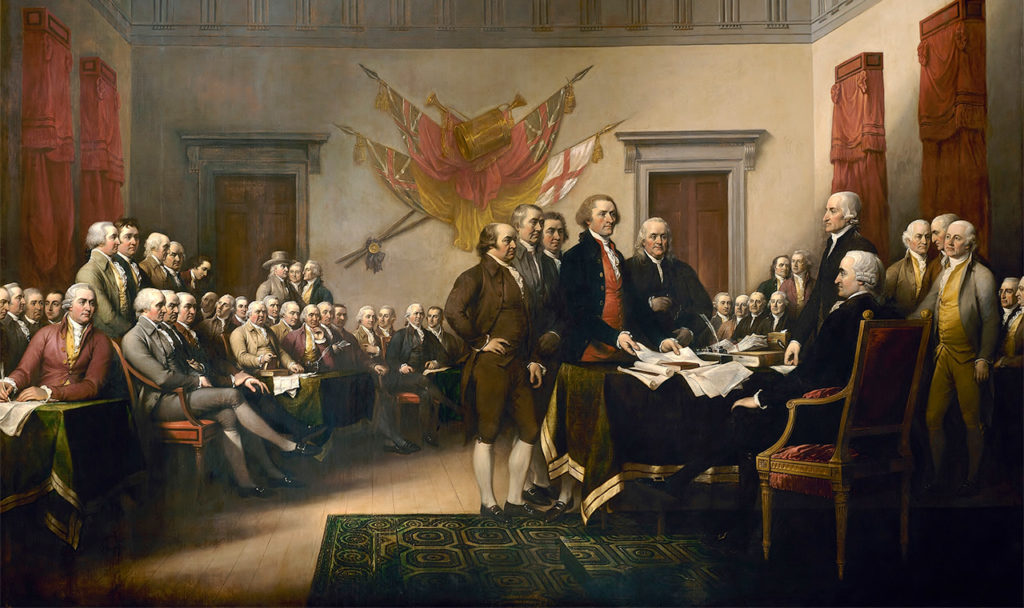 On July 4, 1776, the Founding Fathers declared to the world not only that the colonies would henceforth be independent from Britain, but also, and more fundamentally,

that all men are created equal, that they are endowed by their Creator with certain unalienable Rights, that among these are Life, Liberty and the pursuit of Happiness. That to secure these rights, Governments are instituted among Men, deriving their just powers from the consent of the governed, That whenever any Form of Government becomes destructive of these ends, it is the Right of the People to alter or to abolish it, and to institute new Government, laying its foundation on such principles and organizing its powers in such form, as to them shall seem most likely to effect their Safety and Happiness.

This was the beginning of the first moral country on earth—a country in which individual rights were to be explicitly recognized and protected.

Although slavery persisted for several decades after the founding, this aberration was ultimately recognized as incompatible with the basic principle of America and thus eradicated. Between the end of the Civil War and the turn of the century, while certain lesser rights-violations legally continued, America came as close as any society has ever come to establishing an exclusively rights-protecting government. Americans were almost fully free to live their own lives, by their own judgment, for their own sake. This is the moral ideal we should embrace and redouble our efforts to achieve: a society in which the basic law of the land is liberty—which means: a society in which government protects the rights of all citizens and violates the rights of none.

On the Fourth of July, celebrate not the rights-violating, crony-enabling welfare state that America has become, but what America once virtually was and factually ought to be: the Land of Liberty. Celebrate man’s “unalienable Rights.” Celebrate the principle that the proper purpose of government is “to secure these rights.” Celebrate the principle that “whenever any Form of Government becomes destructive of these ends, it is the Right of the People to alter or to abolish it.” And, most of all, celebrate the Founders, who recognized and codified these principles, thus making possible the degree of freedom we still enjoy and the moral ideal to which we should rise.

The Left’s Dishonesty Regarding “No-Cost” Birth Control
After Hobby Lobby Ruling, How About Government Protect the Rights of Everyone?
Return to Top