View cart “Obama on Islamic State: Pretend Islam Is Not Islam (PDF)” has been added to your cart. 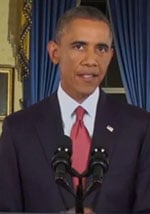 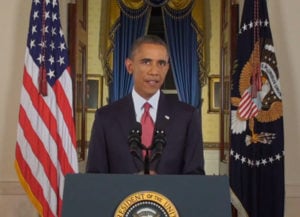 Yesterday Barack Obama outlined his “strategy” to take on Islamic State (aka ISIS, ISIL). In brief, his strategy is to selectively bomb Islamic State jihadists in Iraq and Syria and to aid and arm the supposed enemies of Islamic State in the hopes that they remain loyal to the United States and that they do not transfer or lose U.S. weapons to America’s enemies.

In other words, Obama’s strategy is a combination of halfhearted attacks on Islamic State and dangerous coalitions with Islamic tyrants and militants, many of whom wish to see America destroyed.

What explains the ineptness of Obama’s foreign policy with respect to Islamic terrorism? One of the most important problems is Obama’s refusal to recognize the nature of America’s enemies.

What motivates Islamic terrorists? As they continually tell us, they are motivated by their religion, Islam. As Craig Biddle points out in his recent article, Iran was constitutionally founded on the Koranic requirement that Muslims engage in violent global conquest. The terrorists that Iran sponsors and encourages—and that Saudi Arabia sponsors and encourages—are motivated by the same religion.

Yet Obama refuses to believe these facts. Instead, he claims:

ISIL is not “Islamic.” No religion condones the killing of innocents, and the vast majority of ISIL’s victims have been Muslim. . . . ISIL is a terrorist organization, pure and simple. And it has no vision other than the slaughter of all who stand in its way.

Obama’s claims that Islamic State is not motivated by Islam, and more broadly that “no religion condones the killing of innocents,” are delusional.

The Koran contains scores of passages instructing believers to fight or kill unbelievers, including commands to “slay the idolaters wherever you find them”—passages that Islamic State militants quote with fervor. (The Judeo-Christian Bible also contains exhortations to commit violence, such as a passage instructing believers to wage war against an enemy tribe and to “kill both man and woman, infant and nursing child.”) Every Islamic nation now in existence routinely executes gays and infidels in the name of “Allah,” and tolerates, if not perpetrates, the murder of women for such “offenses” as sex outside of marriage or being raped.

As for the fact that Islamic State jihadists murder other Muslims, that comes as no surprise, for the Koran also commands believers to kill “hypocrites” who do not strictly obey the Koran.

It is true that many self-professed Muslims do not wage war against unbelievers, as the Koran commands them to do, just as Jews today do not kill witches and adulterers, as the Old Testament requires. The degree to which Muslims live peacefully with unbelievers and respect their rights is the degree to which they do not take their religion seriously.

The Jihad Against America and How to End It
Sam Harris: Yes, Islamic Jihadists Are Motivated by Religion
Return to Top