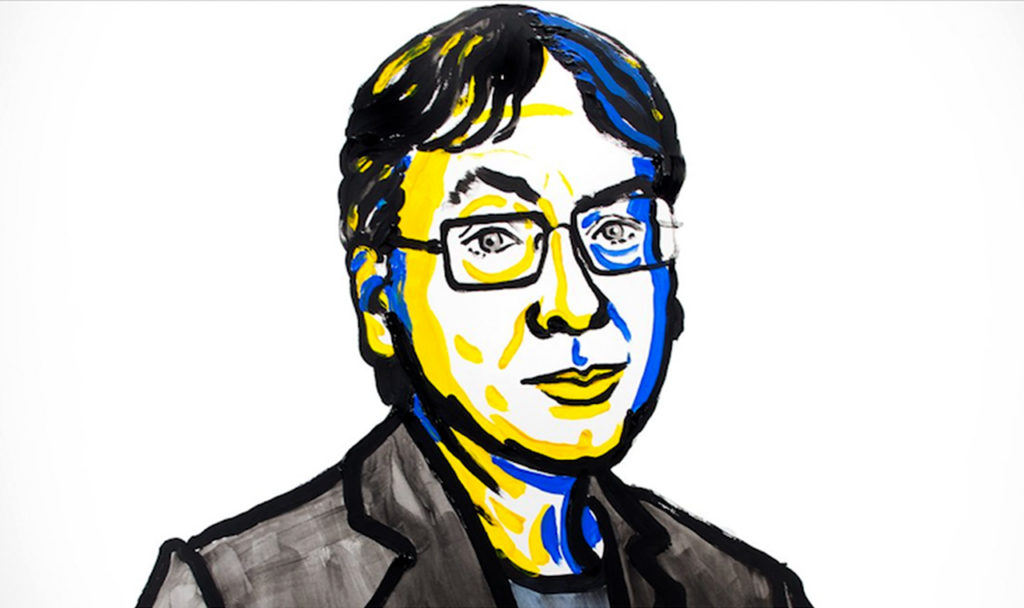 “For the greatest benefit to mankind,”⁠ begins the 2017 Nobel Prize in literature. But don’t get your hopes up. It continues: The Prize goes to “Kazuo Ishiguro, ‘who, in novels of great emotional force, has uncovered the abyss beneath our illusory sense of connection with the world.’”1

The New York Times writes approvingly of the author, “He has obsessively returned to the same themes in his work, including the fallibility of memory, mortality and the porous nature of time.” Ishiguro’s fans, who say he’s a “phenomenal” and “visionary author,” select the following passages from his works to “exemplify why the novelist won the Nobel Prize in literature.”

“I keep thinking about this river somewhere, with the water moving really fast. And these two people in the water, trying to hold onto each other, holding on as hard as they can, but in the end it’s just too much. The current’s too strong. They’ve got to let go, drift apart. That’s how it is with us. It’s a shame, Kath, because we’ve loved each other all our lives. But in the end, we can’t stay together forever.” —Never Let Me Go

“But then again I wonder if what we feel in our hearts today isn’t like these raindrops still falling on us from the soaked leaves above, even though the sky itself long stopped raining. I’m wondering if without our memories, there’s nothing for it but for our love to fade and die.” —The Buried Giant

“All I know is that I’ve wasted all these years looking for something, a sort of trophy I’d get only if I really, really did enough to deserve it. But I don’t want it anymore, I want something else now, something warm and sheltering, something I can turn to, regardless of what I do, regardless of who I become. Something that will just be there, always, like tomorrow’s sky. That’s what I want now, and I think it’s what you should want too. But it will be too late soon. We’ll become too set to change. If we don’t take our chance now, another may never come for either of us.” —We Were the Orphans

“As with a wound on one’s own body, it is possible to develop an intimacy with the most disturbing of things.” —A Pale View of Hills⁠2

Apparently, neither the Swedish Academy nor Ishiguro’s fans have any qualms about developing “an intimacy with the most disturbing of things.”

I haven’t read Ishiguro’s work, and I never would given the excerpts above. Such trash doesn’t warrant the time, much less praise or honors.

From my perspective, “the most disturbing of things” pertaining to this event is that the most prestigious literary prize—a prize that is supposed to be awarded to a writer who provides “the greatest benefit to mankind”—goes to a man preaching human helplessness.

I wonder if Elon Musk “benefitted” from awareness of “the abyss beneath our illusory sense of connection with the world” in preparing for the launch of ten new satellites into space yesterday.

In reality, the worldview (reportedly) presented in Ishiguro’s works better describes what people with mental disorders feel—and perhaps what Stephen Paddock, the Las Vegas shooter, felt. Yet the Swedish Academy is honoring an author whose message, in essence, is: Reality is unknowable, and you can’t succeed or be happy. “In the end it’s just too much. The current’s too strong.” So just give up.

What could go wrong?

Contrary to skeptics and nihilists, it’s self-evident that our senses directly connect us, not to an unknowable abyss, but to a solid reality that we can understand by means of reason and transform to suit our needs. People used to live in caves and drink disease-ridden water from stagnant pools. Today, we live in homes with electricity, heating, and air conditioning; clean water flows from the faucet at the turn of a knob; supermarkets provide countless fruits, vegetables, meats, and other foods cheaply and in abundance; department stores provide clothing, furnishings, and all manner of goods that enhance our lives; Amazon Prime delivers practically anything to your front door in a day or two; doctors eradicate disease after disease; airliners fly us from continent to continent in a matter of hours; tech giants produce face-reading phones, apps that enhance our lives in myriad ways, and hot air balloons that provide cell coverage to the most remote islands. And on and on.

But never mind all that. According to Ishiguro and the Swedish Academy, our sense of connection to the world is illusory. There’s an abyss between us and reality. We may as well give up.

Sixty years ago today, Ayn Rand unmasked such literary nihilism in her masterpiece, Atlas Shrugged. “The literature of the past,” declares Ishiguro’s kindred spirit, Balph Eubank, “was a shallow fraud.”

“It whitewashed life in order to please the money tycoons whom it served. Morality, free will, achievement, happy endings, and man as some sort of heroic being—all that stuff is laughable to us. Our age has given depth to literature for the first time, by exposing the real essence of life.”

A very young girl in a white evening gown asked timidly, “What is the real essence of life, Mr. Eubank?”

“That is a delusion of those whose emotions are superficial.”

Another villain in Atlas, Dr. Pritchett, speaks to the philosophic roots of this nonsense:

“You suffer from the popular delusion of believing that things can be understood. You do not grasp the fact that the universe is a solid contradiction.”

“A contradiction of what?” asked the matron.

“My dear madam, the duty of thinkers is not to explain, but to demonstrate that nothing can be explained.”⁠3

It appears that Dr. Pritchett “uncovered the abyss beneath our illusory sense of connection with the world” several decades before Ishiguro did.

Atlas Shrugged blows the lid off this nihilistic muck and exposes its impotence.

If you want to enjoy novels that genuinely deserve praise for their great emotional force, read (or re-read) Rand’s Atlas Shrugged and The Fountainhead, which illustrate how man’s senses and his reasoning mind connect him to the world and enable him to transform the raw materials of nature into values that enable him to flourish.

An Atlas Shrugged reading group, called The Atlas Project, was recently launched—and it’s not too late to join in. The project is hosted by Gregory Salmieri, editor of Blackwell’s A Companion to Ayn Rand, and Ben Bayer, a fellow at the Ayn Rand Institute. For more information and to join the discussion, visit The Atlas Project’s Facebook group here.

Jon Hersey is the associate editor of The Objective Standard.
View all posts by Jon Hersey →
Lt. Gen. Silveria’s Stand Against Racism, and His Unfortunate Paean to “Diversity”
TOS Writers Group on Facebook—Join the Fray